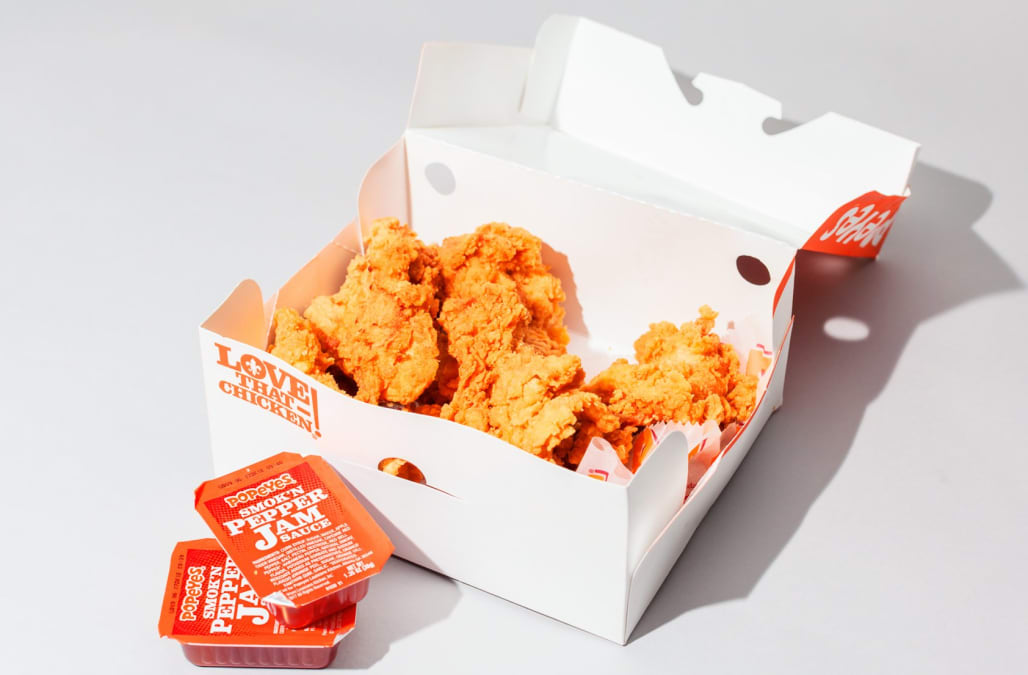 Popeyes' new "Sweet and Crunchy" chicken has arrived, and it's a strange salvo in the fast-food gimmick wars.

These fried chicken tenders are coated in a shortbread cookie breading instead of the tried-and-true Popeyes concoction.

There's a more subtle sweetness than expected, and it doesn't overwhelm the chicken — as it shouldn't, because everyone knows the chicken is the star at Popeyes.

Even in the loose bits of breading, the sweetness isn't absolute. Despite what the internet seems to think, this isn't just a chicken strip dunked in some cookie dough.

The special dipping sauce that accompanies it, however, is blatantly sugary. In fact, the first two ingredients of the "Smok'n Pepper Jam" sauce are corn syrup and sugar; evidently, one was not enough. It tastes like sweet and sour sauce (which is never sour, in my experience) infused with habanero peppers — spicy at first, but run-of-the-mill sugariness run amok follows. The blackened ranch or the "Mardi Gras Mustard" sauces would pair well with the cookie tenders instead. As strangely good as they are, they're best enjoyed in moderation. At the end of the second tender, the novelty fades fast. Flavor fatigue sets in even quicker with the strange dipping jam.

Such is the ultimate arc of gimmick fast-food. The honeymoon is over, and the special becomes the strange. You bore of shortbread cookie chicken, and start wishing you had the regular tenders, despite your financial and culinary commitment. Luckily, these are a limited time offer available through June 25, so think of it as a peculiar, one-off fling with... cookie chicken.

Related: A ranking of the best fast food french fries

Expert: How to take care of Tupperware properly