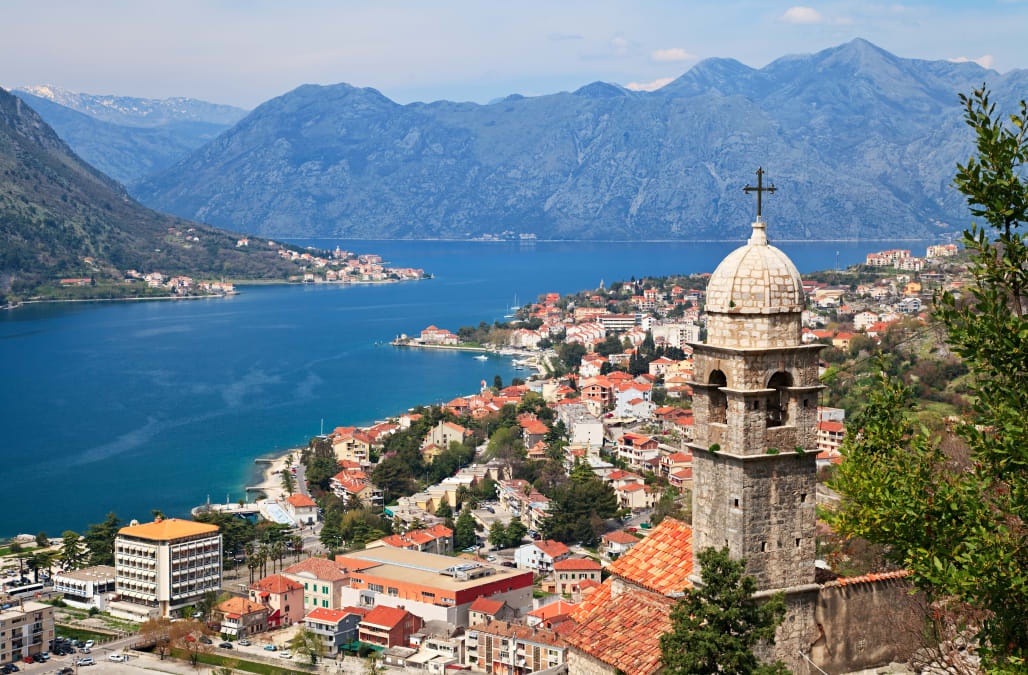 Whether it was Croatia's EU entry in 2013, 'Game of Thrones' or Yacht Week, Croatia has become a certified tourist hotspot. Pictures of Dubrovnik's ancient walls, terra-cotta roofs and iridescent waters flood Pintrest and Instagram. All of this attention is starting to bring another hidden gem into the spotlight ... Montenegro.

Ever since gaining its independence from Serbia in 2006, the tiny nation is rebounding from its tumultuous past as a Nazi occupied territory and mainstay in the Yugoslav War that dominated the 1990s.

Just an hour's bus ride away from Dubrovnik is the Bay of Kotor. Kotor is nestled between mountains, providing a dramatic backdrop to boating, and aimlessly wandering through its medieval maze of cobblestone streets. The old wall that has protected the city from invasion since the 9th century is still intact, so visitors can almost feel what it was like when the fortified town was under Venetian rule.

Perast, another city in the Kotor Bay, is only home to around 300 people but has 16 churches and 17 grand palazzos, giving you ample room to roam.

Visitors can feel like the Little Mermaid of Montenegro by taking a boat to the Blue Cave, squeezing under the grotto's long-hanging entrance and taking a dip in the refulgent aqua water caused by the sun reflecting off the cave's sandy bottom.

20 photos that'll convince you to go to Montenegro
Sveti Stefan island in Budva, Montenegro
Old city of Kotor, Montenegro
iStockphoto
Montenegro
The Ballet Dancer Statue situated on a rock, is a symbol of the city of Budva located close to the citadel with some good restaurants and cafes surrounding it. The statue offers a magnificent view of the old townand the sea. The beautiful sculpture has a sad story attached to its existencehowever it is completely worth the visit. Some people say that this is a statue of a young girl who drowned here but others say that this is just an ordinary statue. This is a good place to take pictures with a panorama of Old Town in back.
Sea cave with blue water at daytime
Panoramic view of the bridge Dzhurdzhevicha at sunset. Montenegro
Durdevica arched Tara Bridge over green Tara Canyon - Montenegro.
Montenegro, View of Njegusi Mausoleum
Montenegro, Lovcen National Park, Njegos Mausoleum
Curtain wall of ancient city Kotor reachin over the mountain crest
People in the stone streets of Budva's Medieval old town on a summer afternoon.
Wonderful view to mountains in the national park Durmitor in Montenegro, Europe. Beauty world.
River and valley of Tara seen from the bridge of Durdevica, 165 meters high, Montenegro
Moment RF
The Monastery of Ostrog is a monastery of the Serbian Orthodox Church situated against an almost vertical background, in Montenegro. It is dedicated to Saint Basil of Ostrog (Sveti Vasilije Ostro?ki), who is buried here. Ostrog monastery is the most popular pilgrimage place in Montenegro.
Montenegro Ostrog Orthodox monastery from 17 century, Piva valley
View of Budva with the Belfry (1867) of Saint John church - symbol of the city, before the storm. Budva is one of the best preserved medieval cities in the Mediterranean and the most popular resorts of Adriatic riviera.
Sea view beach Sveti Stefan Milocer beach Montenegro.
Monastery at the blue sky in Podgorica, Montenegro
Up Next

The country's tiny size means you can have breakfast on the Adriatic Sea, then hit the mountains by the afternoon.

For more interested in land-based activities, Montenegro's topography is a playground for hikers. The Tara River cuts through some of the world's deepest canyons though mountains in the National Park. According to Lonely Planet, the Grand Canyon is a mere 200 meters deeper than the Tara Canyon. Raft down the crystal clear water or zip line across for a bird's eye view.

For spectacular views, head to Lovćen National Park. Hikers can beeline to the the Njegoš Mausoleum, which is perched upon the top of the second highest peak in the park. Two towering statues guard the tomb of Petar II Petrovic Njegos, the beloved Prince-Bishop of Montenegro who passed in 1851.

Montenegro is working to coming back to its pre-war heyday when it was beloved by the likes of Marilyn Monroe and Sophia Loren -- but before it reaches that point, be the first among friends to experience this pearl of the Mediterranean.

More from AOL.com:
The safest countries in the world
Flying from the US to Europe will be cheaper this summer
Fashion mogul Chris Burch built a five-star resort on a remote Indonesian island — and it's officially the best in the world

This $30 indoor grill is on sale for one more day