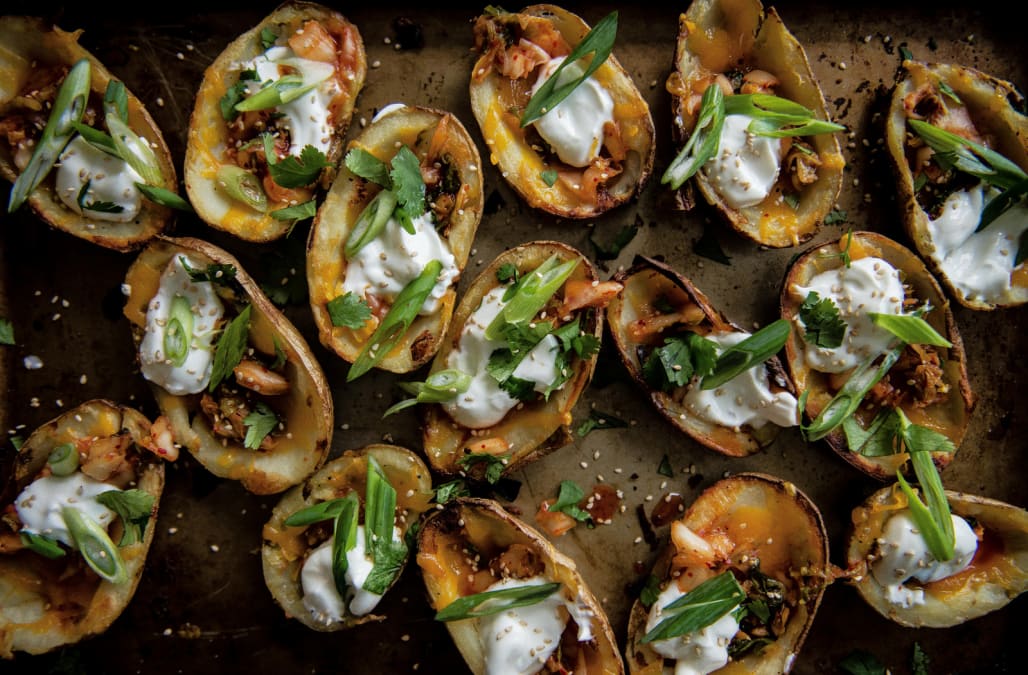 I spent the summer between high school and college working two jobs, one as a hostess at a Chinese restaurant and the other as a waitress at a T.G.I.Friday's. Most of my time at T.G.I.Friday's was spent (1) trying to raise my voice enough in the kitchen that they could hear me when I asked for more ranch, (2) forgetting to enter orders, or (3) eating breadsticks out of the breadstick bin. (I may have been the worst server they had.)

Every once in awhile we got free appetizer or free dessert cards for doing a good job, which smarter servers than me kept in their back pocket to give to customers to encourage bigger tips, and which I interpreted literally and used to get free potato skins. Even after someone clued me in, I think I kept half to use them the savvy way (for me, usually to apologize to a customer for spilling something) and half for free appetizers, because I'm pretty sure it's perfectly reasonable to choose potatoes, bacon, and cheese now over a bigger tip from a customer later. (In case there was any doubt over which kid I'd be in the marshmallow test.) 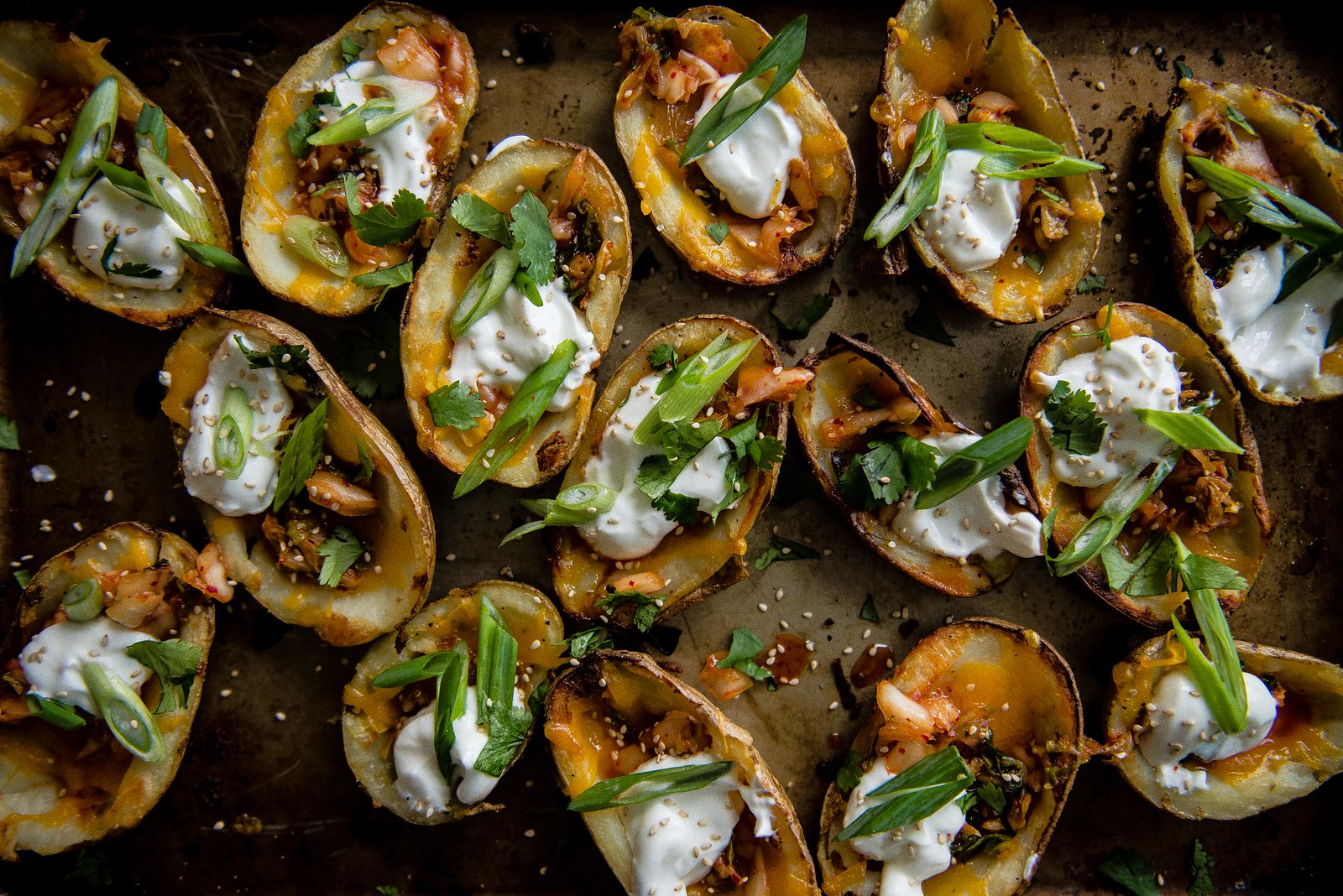 I forgot all about this until just before the Super Bowl this year, when B2 said, in a sudden onset of one of his good ideas (which almost always have to do with potatoes, it seems), "You know what would be really good? Kimchi and potato skins." Yes! Yes, it would. So there was only one thing to be done that Sunday, and that was revisit my old favorite appetizer (even if it meant paying for them this time). A pile of cute little potatoes were bought, baked until crisp and filled with melted cheese, a quick kimchi relish, sour cream, and scallions. Kimchi goes and makes an already wonderful thing even better — it adds a little bit of heat that goes perfectly with the cheese (I am always a supporter of kimchi and cheese) and a pungent tang that matches the sour cream and sharp scallions. On top of that, the tart spice and fresh crunch helps to lighten everything up just a little bit. If you wanted, you could crumble some bacon or fry up some slivered pork belly to add more heft, but we loved these just as is, and between us, finished the entire pan by the time Lady Gaga came on. 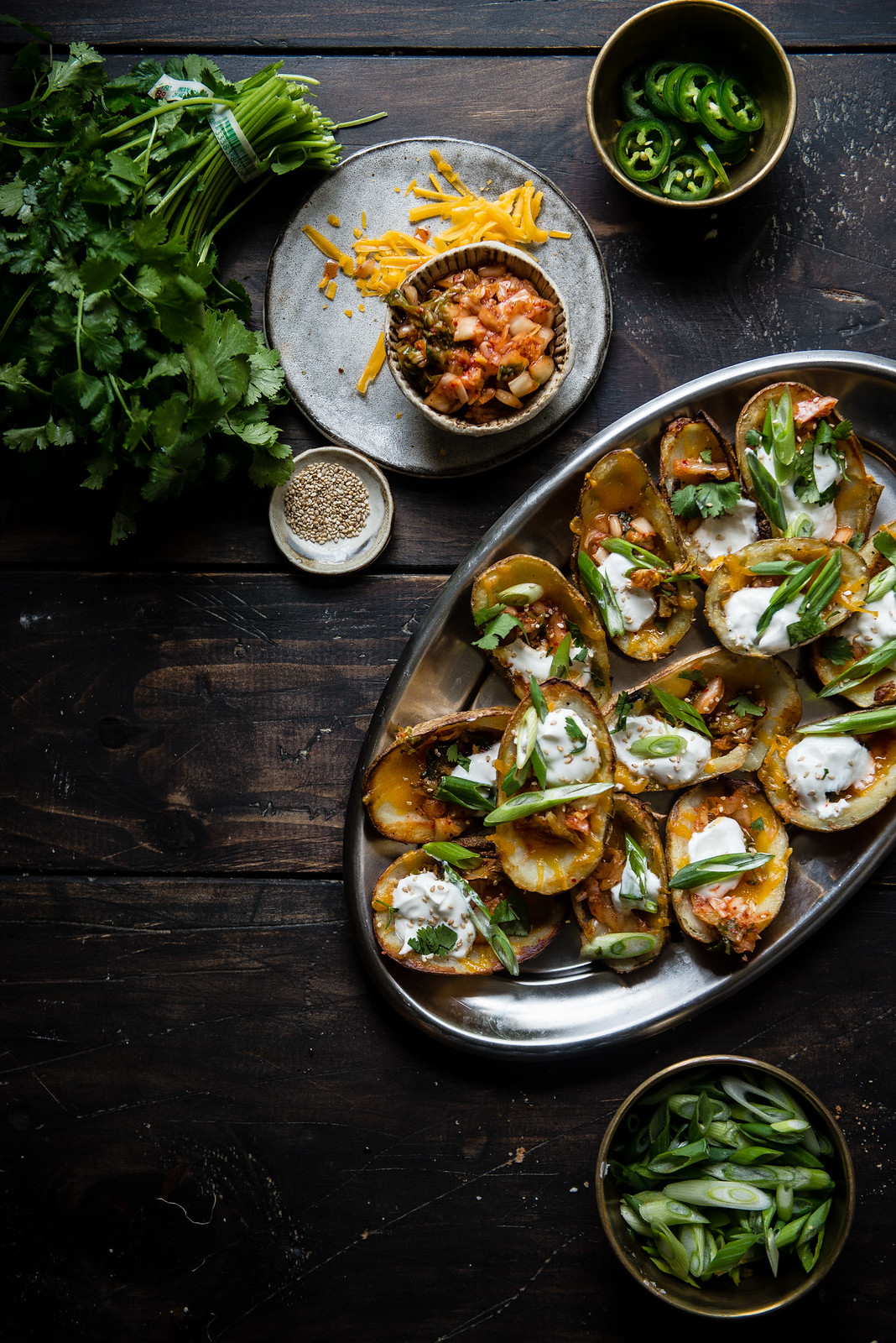 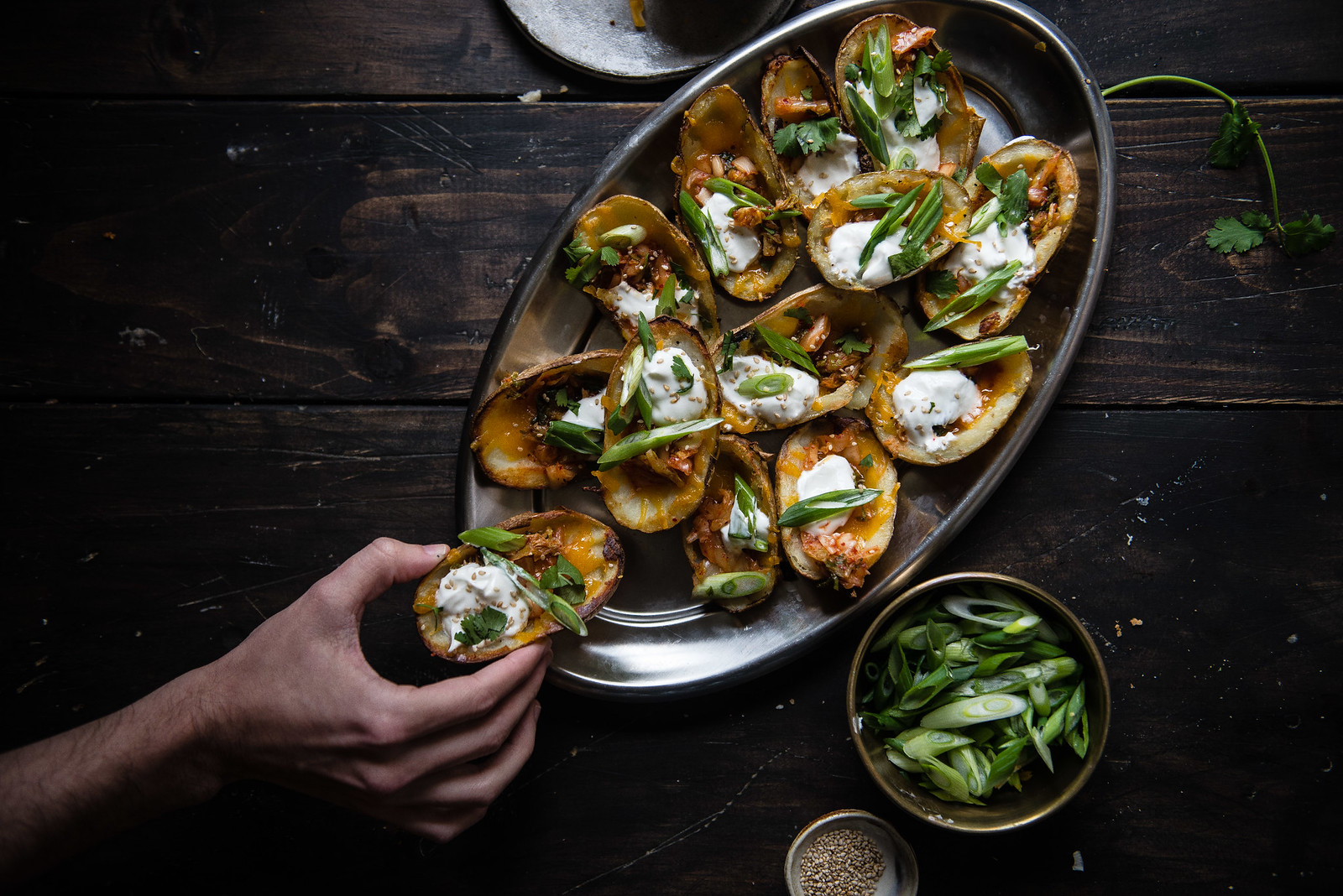 ​​​​​​
Kimchi potato skins
Bacon crumbles or thinly sliced and cooked pork belly wouldn't be amiss here, added to the potato skins along with the cheddar; we omitted it just to keep things a little, little bit lighter.

Instructions
1. Preheat oven to 400° F. Thoroughly scrub the potatoes until clean and let dry. Rub the potatoes with oil and sprinkle with salt and black pepper. I used about 2 tablespoons oil and ½ teaspoon each salt and black pepper. Prick potatoes all over with a fork or knife, then place them on a baking sheet and bake for 50-60 minutes, or until skin is crisp and potatoes are tender.
2. Remove the potatoes from the oven and turn the oven up to 500° F. When the potatoes are cool enough to handle, halve them and scoop out the flesh, leaving a thin border of potato attached to the skins. (Save the flesh for another use; we mashed them with a bit of milk, butter, and salt and pepper.)
3. Mix the remaining 2 tablespoons vegetable oil and 1 tablespoon sesame oil together in a small bowl. Brush both the skins and the insides of the potatoes with the sesame oil mixture and season the insides with more salt and pepper. Place the potatoes cut-side down and bake until skins are crisp, about 5-8 minutes, then flip and bake with the cut-side up until edges are browned, another 5-8 minutes. Meanwhile, make the kimchi relish: Stir together the kimchi, honey, and rice vinegar.
4. When the potatoes are done, sprinkle each potato skin with garlic powder and 2-3 tablespoons shredded cheddar and return them to the oven for a final 3-4 minutes, just until the cheese is melted. Serve topped with kimchi relish, sour cream, cilantro, and scallions.

Notes
These are a bit more involved than I realized before I tackled them, but they're not hard, just time-consuming, and can easily be broken down into manageable pieces if you plan ahead more than I did. Bake the potatoes one day and scoop them once chilled, then save the skins to crisp up and fill with toppings on the day you'd like to serve them.

RELATED: Potatoes for your brunch wishes

Potatoes for your brunch wishes

There appears to be some dispute over the origins of this dish... and it most likely has nothing to do with anything Irish, but the name suggests otherwise.  You have to get your inspiration wherever you can. - Today's Nest

"Made with just a few basic ingredients and ready in less than 20 minutes. Because “delicious yet easy” is my holiday motto!" - Olivia's Cuisine

"Cheesy and creamy, these Twice Baked Sweet Potatoes with Cheddar and Canadian Bacon make a great side dish or a filling main dish." - Taste and Tell

"Bacon and fingerling potatoes are all you need for these finger-licking appetizers. Savory little bites full of flavor!" - Sweet and Savory

"These super healthy Baked Sweet Potatoes with Egg will give you a nutritional jump start to your day.  They are full of protein and healthy fats that will keep you full until lunch." - Seasonal Cravings

Yes, it's possible to vote safely in person

Why does hand sanitizer smell like tequila or vodka?