This is what Kate Middleton actually eats 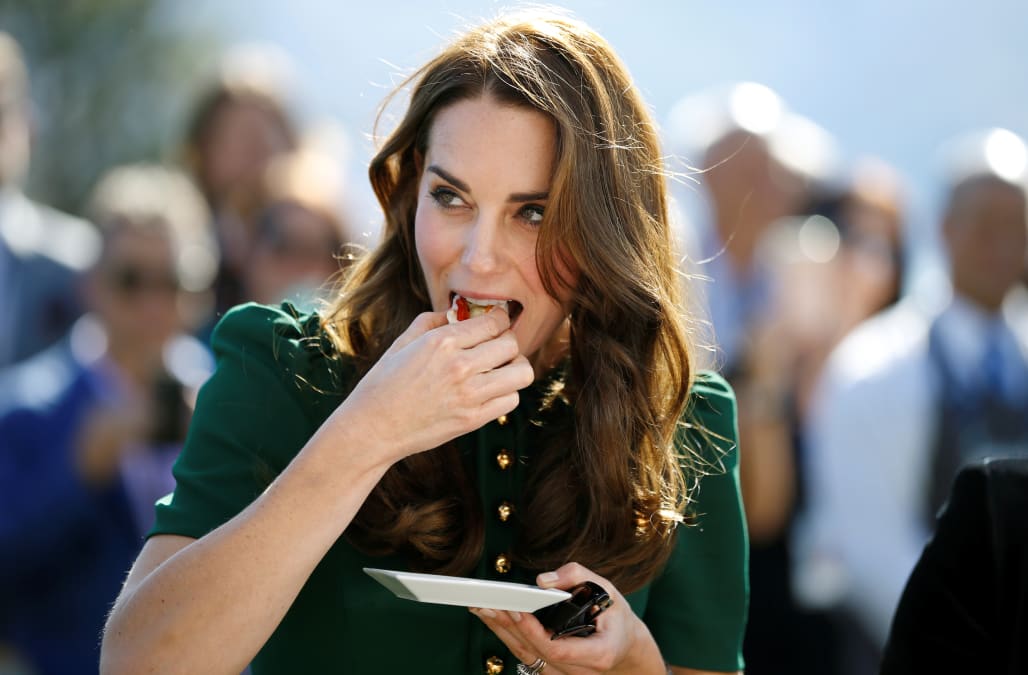 We can't all be Kate Middleton, Duchess of Cambridge. But thanks to some new information, we can all eat like her—or at least, we can try to. Thanks to some serious compiling work from Delish, we now know Middleton's diet involves raw foods, homemade curries, and royal feasts. And did I mention she loves sweets, too?

More from SELF: Here's How Many Calories You Should Be Eating For Weight Loss
​​​​​
We might not all have access to Great Britain's finest chefs, or fully understand what a Christmas fruitcake entails. But that doesn't mean we can't channel our inner royal selves for a moment or two.

Here, eight things Middleton is known to cook, eat, or serve her family (see No. 6 for her go-to dish):

8 PHOTOS
This is what Kate Middleton actually eats
See Gallery

This is what Kate Middleton actually eats

When she's aiming to lose weight, she goes high-protein and low-carb.

Middleton reportedly relied on the Dukan Diet when trying to get in shape for her wedding. The program—which Jennifer Lopez and Gisele Bundchen have also reportedly given a try—focuses on increasing protein intake and decreasing carbohydrates. Lean proteins, vegetables, fruit, and whole wheat are all on the table, and Middleton's mother (another fan of the regimen) suggests calming cravings with prawns and cottage cheese.

She has some go-to raw favorites, too.

She overcame a pregnancy-triggered food aversion with fruits and oats.

When Middleton was pregnant with Prince George, she struggled with extreme morning sickness and food aversion. While she reportedly attempted to combat her nausea by undergoing food hypnotherapy, she also stuck to a diet of avocados, berries, and oatmeal. These hearty foods helped her put on weight during her pregnancy, despite her morning sickness.

Middleton swears by family recipes so much that she whipped one up for the queen during her first royal family Christmas. Middleton made a batch of her grandmother's famous chutney to give Queen Elizabeth, in lieu of a purchased gift. "I was slightly worried about it," Middleton said of her decision. "But I noticed the next day that it was on the table."

But she's just as apt to be adventurous and try new dishes.

Lovely at-home cooking doesn't keep Middleton from exploring her options. She and husband Prince William, Duke of Cambridge, used their Canadian royal tour as an opportunity to think outside the box, food-wise. Middleton even visited a British Columbia food and wine festival and gave geoduck clams with miso mustard sauce a try! "It's really unusual," she said of the dish. "I've never seen it before."

She loves cooking and hosting.

Middleton enjoys preparing food for her family and sharing meals together at the kitchen table. While Prince William likes to tease her about her cooking, she's known to be quite the hostess. Her go-to dish? Curry.

And the holidays always mean time for a feast.

Middleton has a sweet tooth, and she's not afraid to treat those around her, either! Family gatherings often end with sticky toffee pudding or jam roly-poly (a pastry roll filled with fruit preserves). At holiday get-togethers, Christmas pudding and fruitcake are served with afternoon tea. But it doesn't have to be a big occasion for Middleton to treat her family. She's been known to serve her children various sweets at other times, too.

​​​Sounds pretty delicious to us!