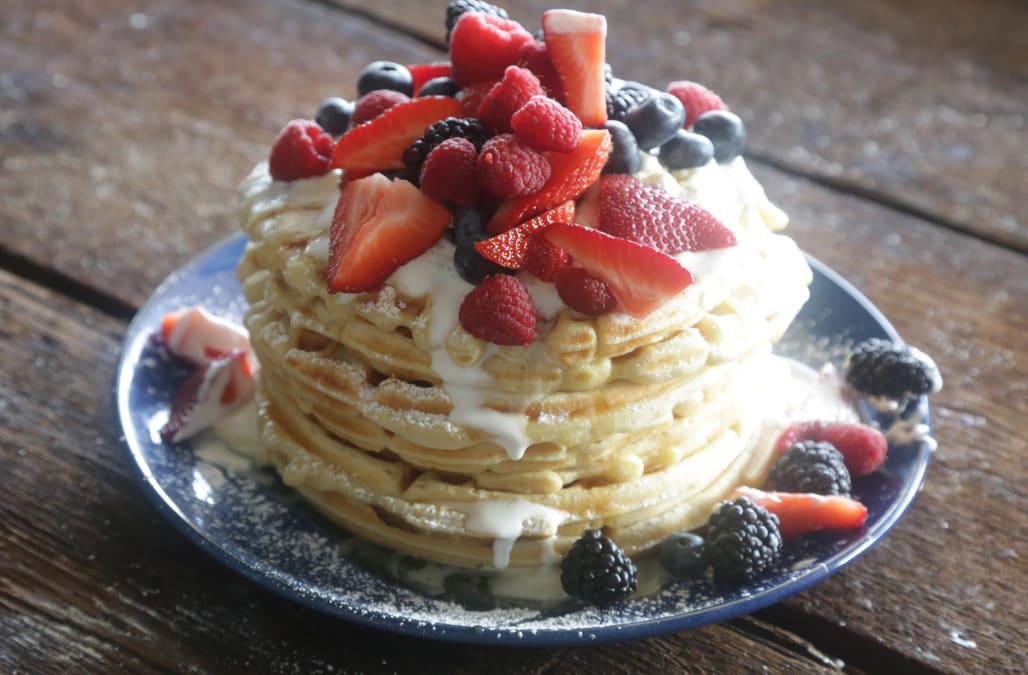 I'm spending the weekend working/maybe some home organization shopping because I'm a mature 27 year old but also I love to procrastinate.

These waffles have been something I've been wanting to throw together for a while now. I've got the ricotta waffles from the book on here that are actually really really good, but they require the having of ricotta in the fridge and unless you're a Giada you probably have to run to the grocery store to grab that, not a good look for a waffle emergency.

I had a bunch of leftover hard cider from the holidays so I wanted to utilize it for something that wasn't drinking 4 by yourself while watching tv, and I landed on waffles. If you can make waffles with club soda and beer then cider is an obvious answer to the equation.

The carbonation helps give some air that you'd normally get from whipping egg whites and the cider itself lends a nice yeasty flavor you'd normally get from a belgian waffle. The waffle your left with has a nice crispy exterior and a fluffy inside and it has for me the sign of a waffle that gives good waffle with the little bubbly outside like you can see above. More syrup pores which is a gross thought but if you don't think about it too hard and just eat the waffle you'll be happy about them.

The even better news is that even if you don't have the hard cider you could easily use a nice light beer or if you're doing the no drinking for january just for funsies you can do any club soda or seltzer water, godspeed.

Hard Cider Waffles
Makes 4-6, depending on your waffle maker I had this one for a while, just got this one at costco for a really good deal (like $30 really good, not $80)

The post Hard Cider Waffles was first shown on Wit and Vinegar.

Related: These waffles are absolutely delicious

6 PHOTOS
Brunch crunch: You thought the pancakes were good? Wait will you see these waffles
See Gallery

Brunch crunch: You thought the pancakes were good? Wait will you see these waffles

"It's finally Friday and that means that it's almost the weekend!! The thing about the weekend that I love best is a slow, home-cooked breakfast.Today's waffle recipe def tops the list of most-loved because cinnamon and pears. And I love pears paired with spices. But you probably already guessed that after my nutmeg & pear pie." - Fix Feast Flair

"This recipe basically calls upon the lord of all things moist, buttermilk, to produce fried chicken that is juicy as all get out. Then, Slider Savior Jon demands these chunks of chicken get sandwiched between two Belgian waffles, which, like, O-freaking-K we won't say no." - Probably This

"here’s nothing that makes my 4 year old happier than when I announce I’m making waffles.  Seriously.  The giddy joy that erupts from her body is contagious.  And these Gingerbread Yogurt Waffles with Powdered Sugar Glaze?  They’re enough to make anyone giddy." - Melanie Makes

"Cornbread Waffle BLT’s with Garlic Aioli  are crispy and sweet cornbread waffles, layered with smoky bacon, fresh lettuce, creamy avocado and garlic aioli for a delicious twist on the classic BLT!" - With Salt and Wit

"Most little ones seem to have favorite toys or favorite stuffed animals.  And favorite colors.  But not our little guy Max.And since it was his birthday the other day, I made him some waffles.  And it must have been the right B, because he was shoveling the sauce into his mouth.  So thank you gods of toddler eating, we totally appreciate it.  And, I'd have to say these waffles are pretty great for full grown people as well." - Home Skillet

"Growing up, my mom made us waffles from time-to-time, but what she was really known for (at least in our kitchen) was her French Toast. I love my mom’s French Toast recipe! " - Jelly Toast