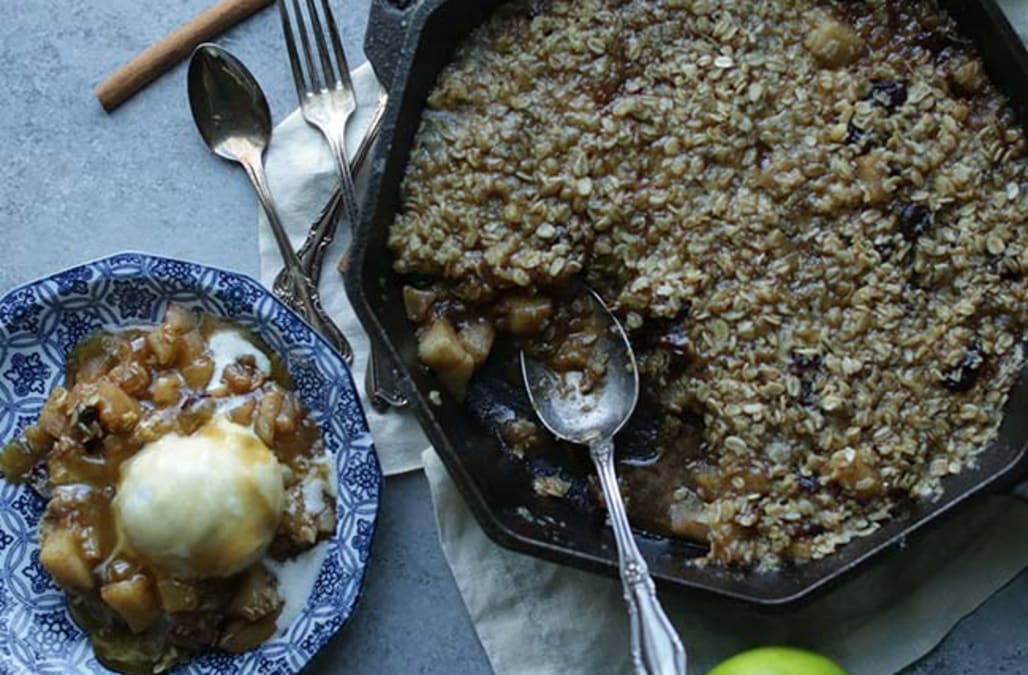 This week I get to head to Orlando, Florida for an awesome show, KBIS. To break that down, it stands for the Kitchen and Bath Industry Show. It's a trade show that is loaded with all of the latest and greatest products you need for your kitchen, bathroom and laundry room projects. I'll be there on behalf of Franke products doings some fund chef demos where I'll be walking through the process on how to make 3 different recipes, including this Stove Top Apple Crisp Recipe with Dried Cherries. The main inspiration for making this recipe is to give you a little taste of what will be going down at KBIS since it isn't open to the public. There will also be a few fun videos uploaded in the coming weeks following the show. In addition to this Stove Top Apple Crisp Recipe with Dried Cherries, I'll also be making some gourmet toasts and a fun Flank Steak Tortilla chip loaded with roasted peppers, onions and a homemade chimichurri sauce. IF they're a huge hit at KBIS, I'll be sure to make them and post them with photos to my site. 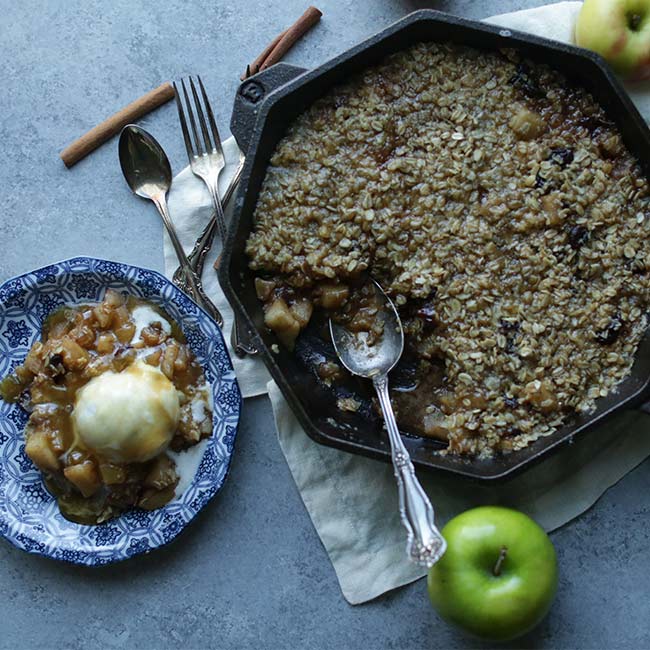 Since I won't have an oven at KBIS, it makes things a little tricky, so when developing this Stove Top Apple Crisp Recipe with Dried Cherries I had to keep in mind that I only will have a stove top. For the life of me I couldn't figure out what could I possibly make as a dessert on a stove top that would finish within the 45 min allotted chef demo time. This Stove Top Apple Crisp Recipe with Dried Cherries is really a reworking of a few other apple crisp recipes I've made to make it work on the stove top. The cool thing is that it's an all in one pan and never leaves the burner. Easy to eat, and easy to clean up. My favorite! This recipe starts with apples and of course I chose a blend of Granny Smith and Apple Crisp giving it a nice balance of tart and sweetness. Since having our Franke products installed into our newly renovated kitchen last April we can't get enough of them. We are obsessed with the oversized farm sink, faucet and sprayer, which seems to extend to like 5 feet. The Franke roller mat is also perfect for drying dishes and as acting as a colander to wash off of fruit and veggies. Perfect!

Once the apples are peeled and large diced it's now time to cook them in a shallow Dutch oven pot or a cast iron skillet with a lid. It's IMPERATIVE that you have a lid for this recipe or else the oatmeal crumble on top won't cook and you'll be eating a lot of raw oats. The apples are simply cooked in some butter, lemon juice, sugar and cinnamon until they are just tender. Be sure not to overcook them or else you may accidentally make apple sauce J. Also make sure to constantly stir them so they don't burn either. I know there's a lot going but at least it's not too difficult.

When the apples are tender remove them from the heat and make the oatmeal crumble that goes to top. I've been making this crumble, or streusel if you'd like, for a long time and it's so incredibly easy to create and is always delicious. Simply cut some cold butter into some flour, brown sugar and rolled oats. Easy peazy lemon squeezy. Once the butter is the size of rice then sprinkle the mixture right over top of the apples making sure to cover them completely. Return the pan back to the burner, place on the lid and cook over low heat for 15 to 20 minutes or until the oats are cooked. While the apple crumble is cooking this is perfect timing to make the caramel, which honestly is fool proof and could not be any easier to make. Simply heat together some butter, brown sugar and heavy cream until smooth. Done! While I was able to place a huge scoop of vanilla ice cream over top off this recipe I unfortunately won't be able to do it at KBIS since there isn't a freezer. That didn't stop me here though :-). Enjoy!!

Instructions
1. Heat 2 ounces of butter over medium heat in a 12" cast iron skillet until melted and add in the diced apples, lemon juice, sugar and cinnamon and cook until tender, about 4 to 7 minutes.
2. Once the apples are tender sprinkle the cherries overtop and lightly mix them in.
3. In a large bowl cut together the remaining 4 ounces of butter, flour, brown sugar and rolled oats until the butter is the size of rice.
4. Sprinkle the oat mixture over the apples covering them completely.
5. Place a lid onto the cast iron skillet and cook over low heat for 15 to 20 minutes or until the oats are cooked.
6. Caramel: In a small pot cook the brown sugar, butter and heavy whipping cream over medium-low heat until smooth, about 5 to 6 minutes.

"The cheddar cheese crust combined with the sour cherries and apples makes for one stellar pie—just the right mix of sweet and salt. I can’t think of a better way to celebrate the start of fall. - Hola Jalapeno

This tart is the perfect combination of beauty and taste! The best dessert to bring to any gathering or holiday party.

"This Caramel Apple Crisp is filled with a gooey, naturally sweetened caramel sauce and topped with a wholesome oat topping! With only 8 ingredients, this secretly healthier dessert will be on repeat all season long!" - With Salt and Wit

"These baked apple strings taste exactly like freeze dried apples. So light and airy, crispy and addicting! And the best part is no special appliance required, just your oven." - Sweet and Savory

"With the perfect amount of cinnamon, little pockets of apples, and a sweet crumb topping, these Apple Cinnamon Muffins are the perfect way to start your day." - Taste and Tell

"This homemade applesauce recipe is chock full of Fall flavors, has no added sugar, and is good enough to call a dessert. Warm vanilla and spiced chai make this applesauce cozy and comforting." - The Wanderlust Kitchen