This coffee inspired dessert makes for a sweet breakfast 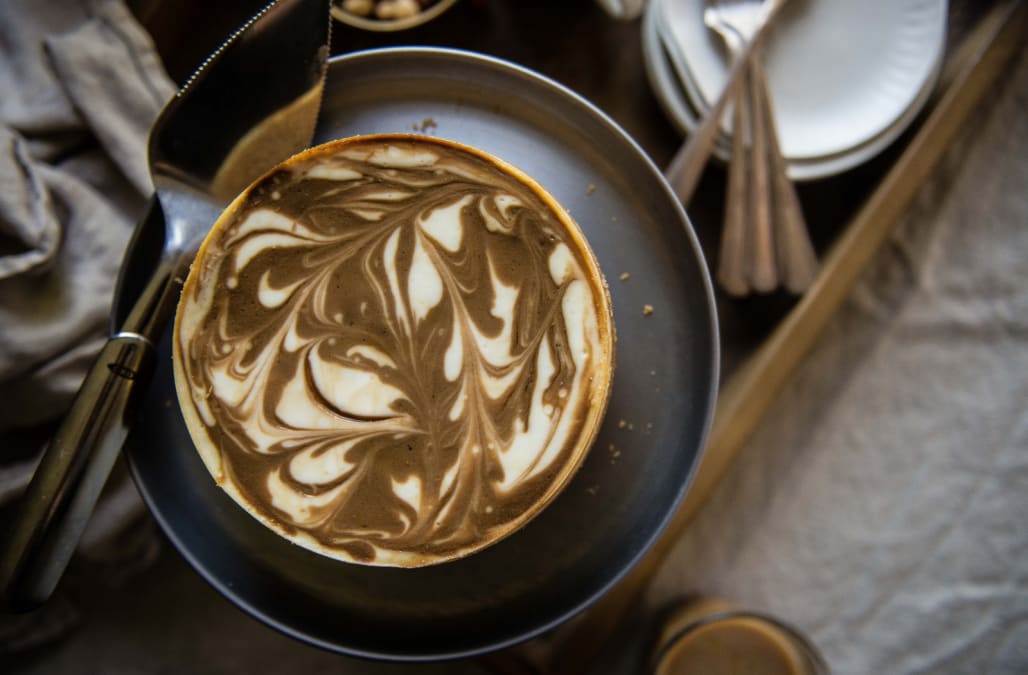 For as long as I can remember, hazelnut coffee has been my dad's way to start the day. Almost every day of my childhood and every day that I'm back home now, I've come downstairs in the morning to find him sitting in our sunny breakfast nook, already up for hours, with an oversized mug of coffee in his hand and a newspaper spread out on the table, his glasses beside it. His coffee is always the same, a spoonful of sugar and a heavy-handed pour of hazelnut Coffeemate that he stirs in with a chopstick until his coffee turns a creamy, tawny beige.

My dad's love for cheesecake has been equally constant: In the summers that I spent tagging along with him to his oncology lab, we almost always came back from lunch in the hospital cafeteria with a narrow slice of cheesecake, perched in a plastic clamshell with a small dollop of cherry sauce on top, which we'd share in his office before he went back to work (and I went back to drawing pictures on his whiteboard or whatever it was that I did to pass the time). 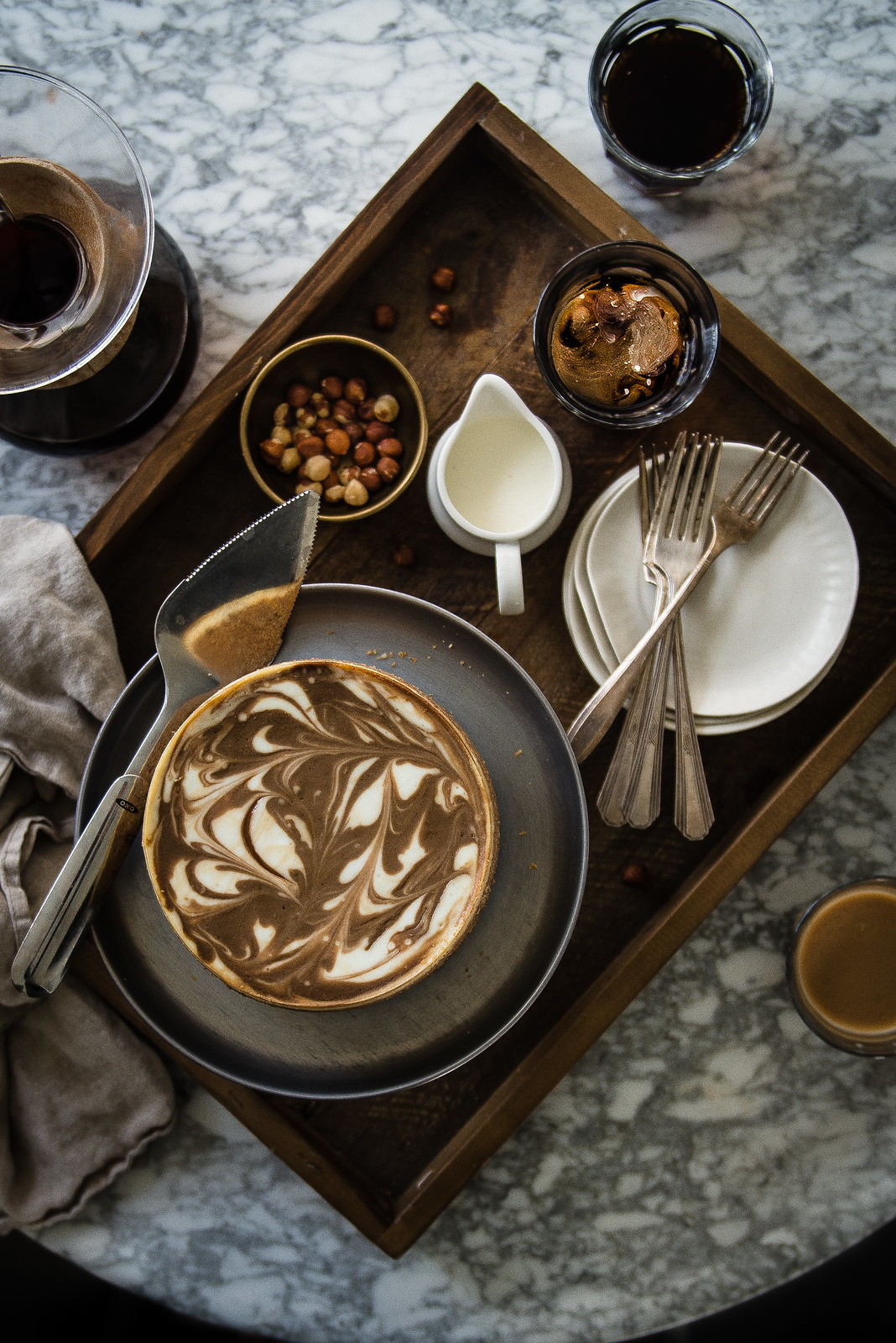 So, and I'm sure it's predictable where this is going, when my dad's 60th birthday rolled around last week and my family made plans to come spend it here with me and (the main attraction) my little potato-shaped bundle of chubby cheeks and teeny toes, a hazelnut coffee cheesecake went immediately on the menu. I have to confess that when it comes to cheesecake, I'm usually content throwing together the Philadelphia cream cheese cheesecake recipe and calling it a (very delicious) day. But it's not every day that someone turns 60, so the recipe I turned to this time was a bit more special, from a cookbook I've been waiting to crack open since it came out: Sarah Kieffer's impeccable new baking book. As I'm sure you know if you've tried any of Sarah's recipes, her recipes are meticulously perfected and unfailingly delightful; for my first big-girl, water-bath(-or-similar, see below) and crack-the-oven-door-to-let-it-cool cheesecake, I couldn't think of anything better. Her cheesecake is silky-smooth, creamy but not too heavy, with just the right balance between sweet and tang. I tweaked it just slightly to scale it down to a mini 6-inch cheesecake, and added ground hazelnuts and coffee-toasted butter for a hazelnut coffee twist to the graham cracker crust, plus a few teaspoons of espresso powder into a little bit of the filling for a coffee swirl on top. But the changes verge on gilding the lily — the cheesecake alone is perfection.

It's not often that my dad gets a day that's about him and not about everyone else in our family, despite all the mornings he was up before all of us, hazelnut coffee in hand, to make us breakfast and get our days going, and all the time and energy spent taking care of us, even when it meant taking us to work with him and juggling a career and us wee ones. I don't think a mini cheesecake can express how grateful I am to have been able to celebrate his big 60th birthday with all of us together for the first time in years (a moment that our decision to move to LA this summer was all about). But this one is, I think, good enough to come close — especially when eaten while holding a roly poly new grandson in your lap. Happiest 60th to you, Dad! 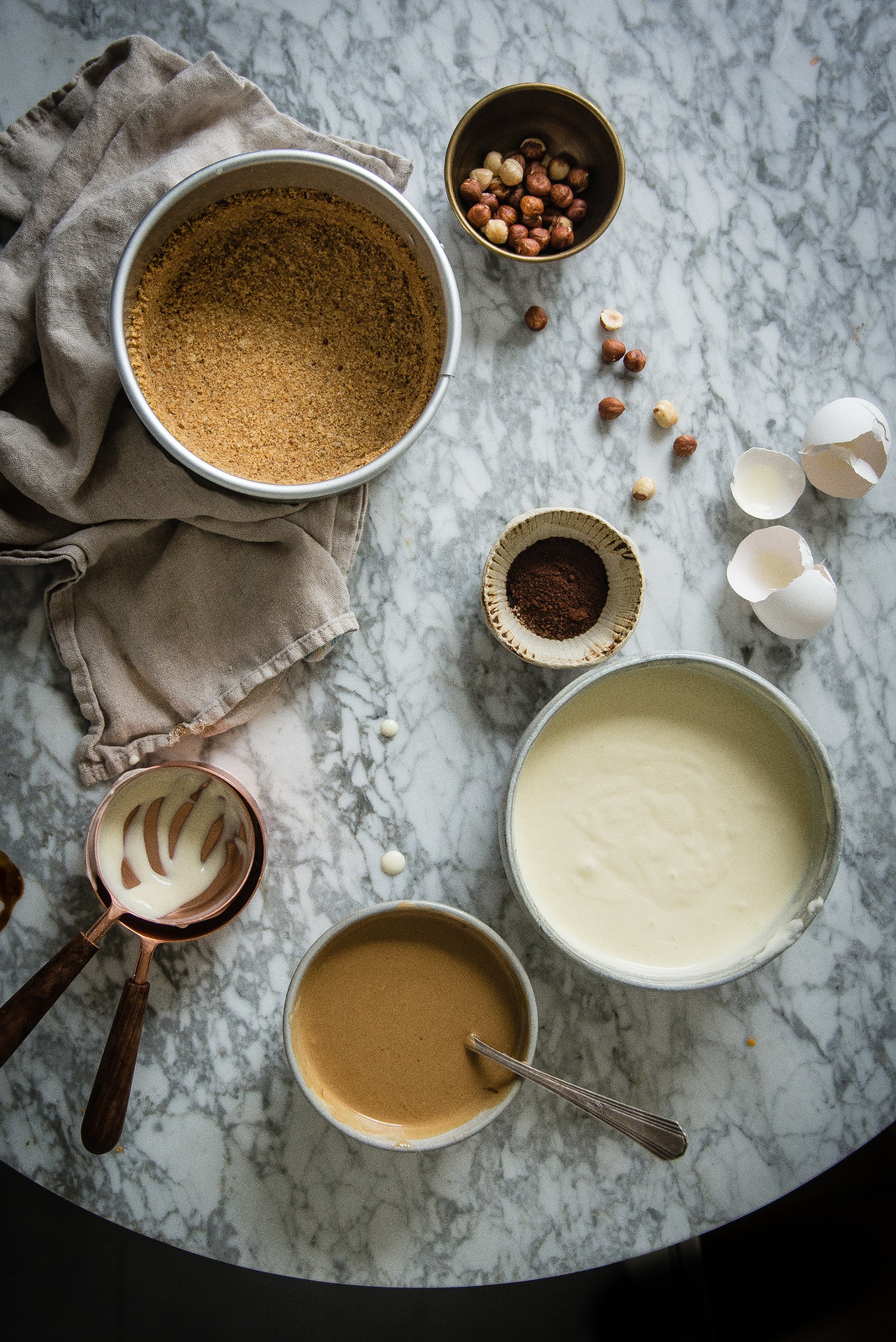 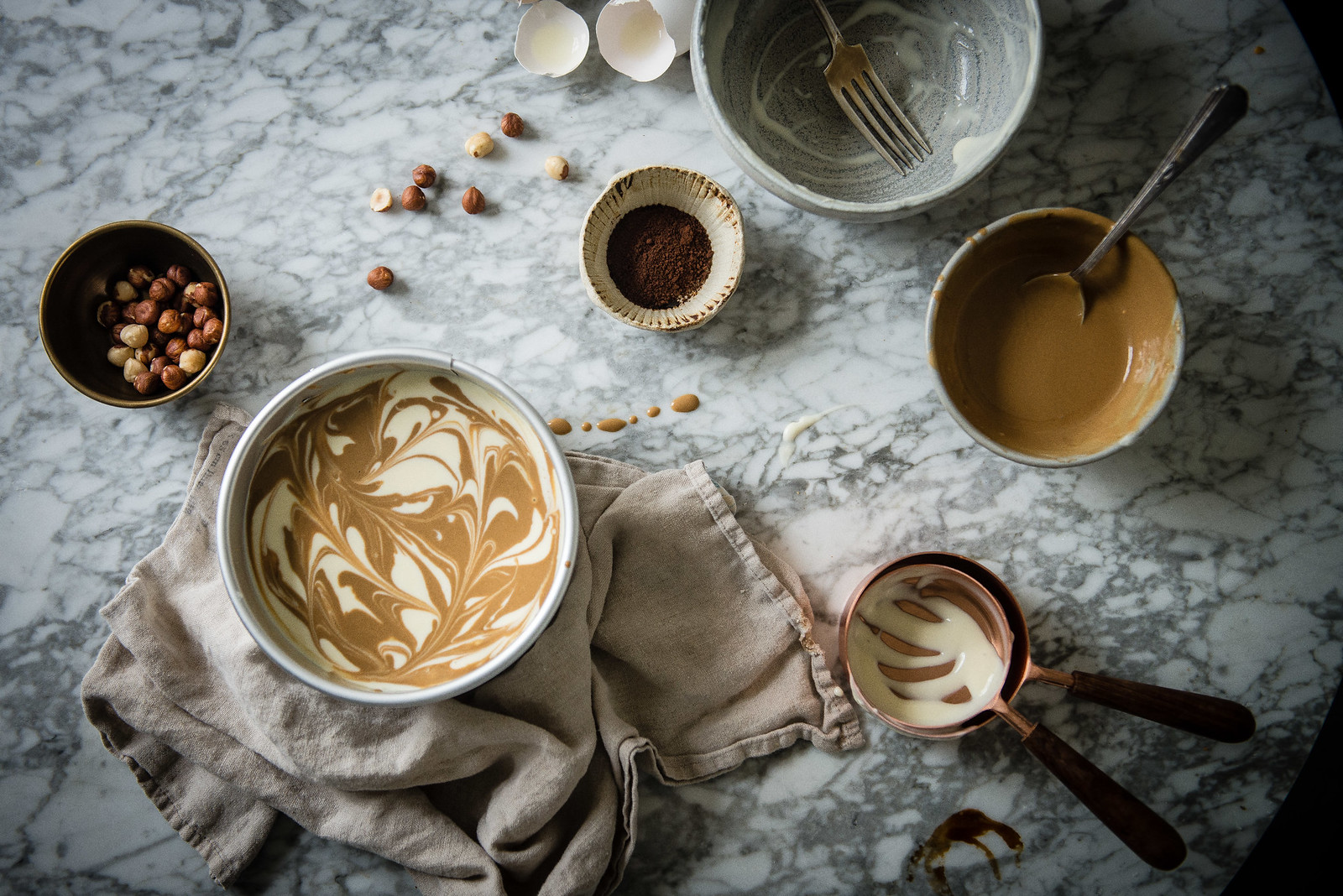 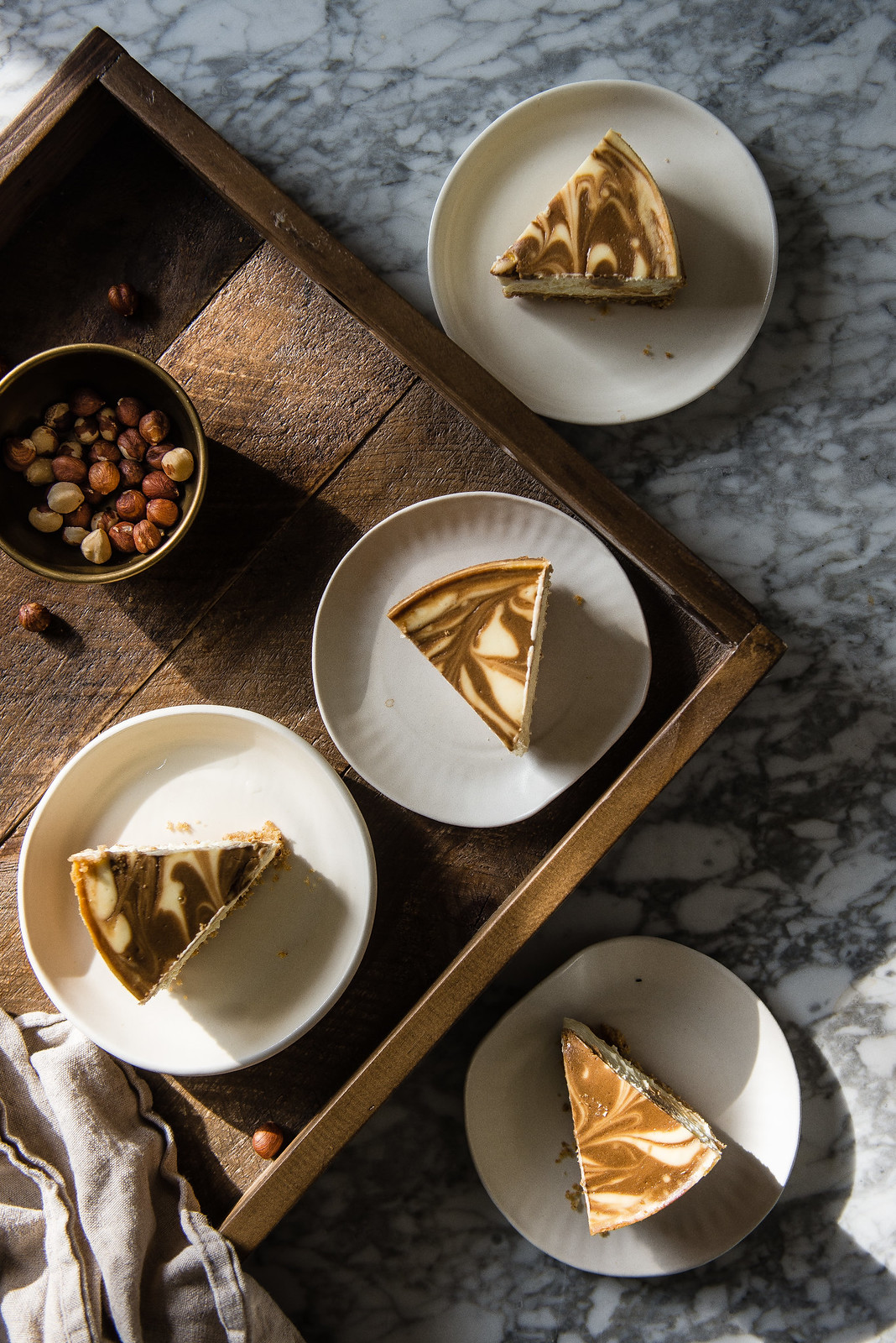 Instructions
1.For the crust: Adjust an oven rack to the middle position. Preheat the oven to 325 F. If making the coffee butter, place the butter and coffee grounds in a small saucepan over medium-low heat and swirl until the butter is melted. Strain out the coffee grounds through a fine mesh sieve and set aside. Whisk the graham cracker crumbs, hazelnut meal, and sugar in a medium bowl. Add the melted butter and mix with a spatula until evenly incorporated. Press the mixture onto the bottom of a 6-inch springform pan and bake 10 minutes. Remove from the oven and let cool. After the pan has cooled, wrap just the sides of the pan in two layers of aluminum foil, with the shiny side facing out (this helps keep the sides of the cheesecake from browning).

2. For the filling: In the bowl of a stand mixer fitted with a paddle, beat the cream cheese on medium until light, fluffy, and completely smooth, about 4 to 5 minutes. Scrape down the bowl repeatedly, making sure that by the end every tiny speck of cream cheese is silky smooth. Add the granulated sugar and beat on medium for 2 to 3 minutes. Add the sour cream, vanilla, and salt and beat on medium for 2 to 3 minutes. Add the butter and mix on low until combined. With the mixer running on medium, add the eggs one at a time, beating after each addition just until combined and stopping to scrape down the sides of the bowl as needed. Using a spatula, give the filling a couple turns to make sure it is fully mixed. (Note: Being without a stand mixer, I used an electric hand mixer for all the mixing and found it worked well.)

3. In a small bowl, dissolve the espresso powder in a teaspoon of hot water or milk. Add about ½ cup of the cheesecake filling to the espresso mixture and mix until fully incorporated.

4. Pour the regular cheesecake filling over the cooled crust and use an offset spatula to smooth the filling evenly across the pan. Dollop the espresso filling across the regular filling and run a butter knife through the dollops to make a swirl pattern. Bang the bottom of the springform pan on the counter to help get rid of any air bubbles. Sarah notes that she does this quite a few times, until most of the air bubbles on the surface pop.

5. Set a roasting pan on the floor of the oven and fill it with 4 quarts of warm water. Place the springform pan on the oven rack and bake for 1 hour without opening the door. Check the cheesecake after 1 hour (or starting at 45 minutes, if you want to err on the side of caution). The outer ring (2 to 3 inches) of the cheesecake should be slightly puffed and fairly firm, and the center should be set but still a bit jiggly when wiggled gently, resembling Jell-O. If the outer ring isn't firm, let the cheesecake bake for another 10 to 15 minutes. If it is done, turn off the heat, open the oven door just a crack, and let the cheesecake rest and cool in the warm, humid oven for 30 minutes.

6. Transfer the pan to a wire rack and let cool 5 to 10 minutes. Remove the foil from the pan, and carefully run a thin knife or offset spatula around the border of the cake to help loosen it from the pan. Once the cake is completely cool, place a piece of parchment paper over the top of the pan (to keep condensation off the top of the cheesecake) and transfer to the refrigerator. Let chill at least 6 hours or overnight.

Notes:
You'll really only need a small amount of coffee filling to swirl on top of a 6-inch cheesecake, given its smaller size -- something I didn't realize! If you end up with extra coffee filling, you can do as I did, and bake the extra in a cupcake tin.