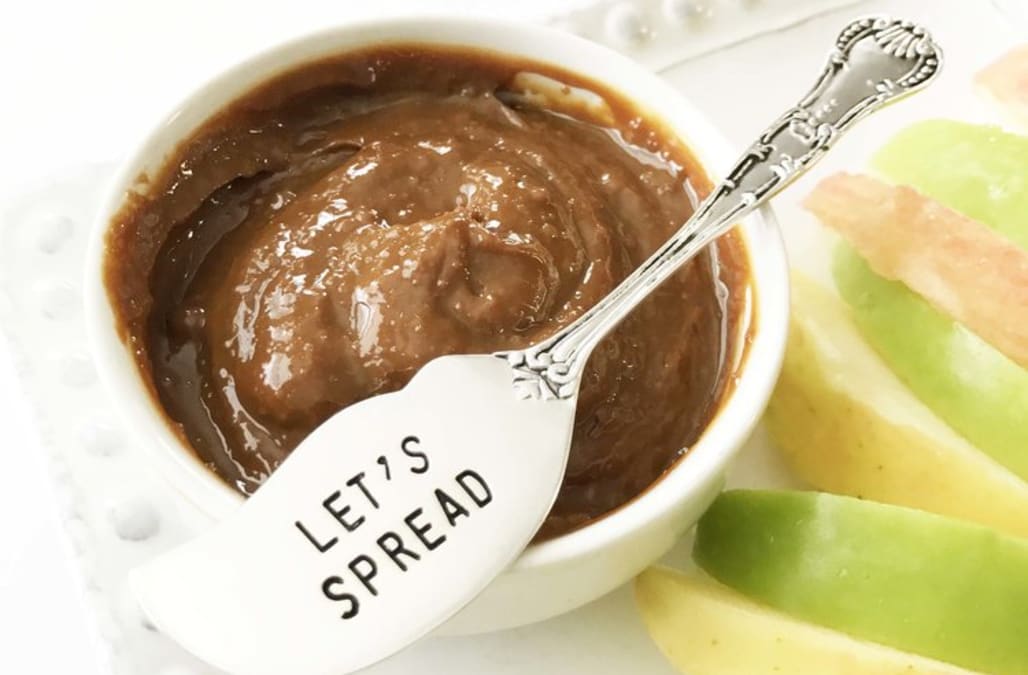 It makes a great gift too. Especially when you put it in cute little jars with decorative notes and ribbons. Why? Because who doesn't like caramel?! Plus, like I said... it's easy to do, tastes great, and has very little hands-on time needed. I'm really hoping to get a few fun edible gift ideas out ahead of the holidays this year. I'd like to think that I have some tips and tricks up my sleeve! One tip I can give you, is to not try this process with fat free sweetened condensed milk since it can tend to coagulate and curdle a bit. Stick with reduced fat and don't cook it on anything but a low heat for the 10 hours.

You may actually do this same process with leaving the sweetened condensed milk in the can with the wrapper removed, but you will want to be mindful of 'exploding cans'. I haven't ever exploded a can before, but I have heard horror stories which is why I opt for the mini glass mason cars instead. Plus, the mini jars are more effective for gift giving. This dulce de leche will be a lot thinner if heated up. The cooler the dulce de leche, the thicker it is. So if you're wanting more of a sauce, warm it up for a few seconds in the microwave. Or if you prefer this as a dip or spread, just let it come to room temperature before serving (like I did here today.)

I enjoy this most when served with fresh apples, but really this would be good in many different uses. It's a pretty versatile sweet treat that's being made lightened up in a way that no one is likely to notice.

Directions:
If using mason jars, decide the sweetened condensed milk evenly among them and seal tightly with the lids. Place the jars into the bottom of a large crock pot and cover with 1-2" of water. Cover and cook on low for 10 hours. Once done, carefully remove from the crock pot with tons (the jars will be very hot); set aside to cool completely. Store in the fridge for up to 4 weeks or serve right away. Enjoy!

This foundation claims to last 24 hours — I tried it