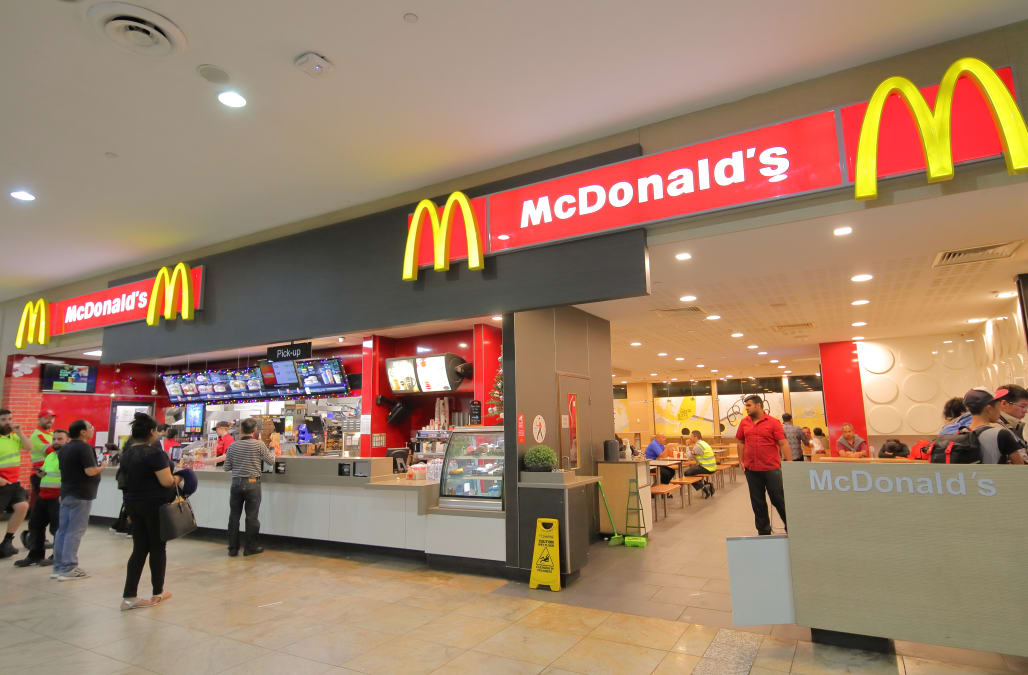 In a call held by Fight For $15 — an organization that advocates on behalf of low-wage employees across a variety of industries, including fast food — McDonald's workers urged company leaders to take action to properly protect restaurant staff. In its demands, the group asked for paid sick leave for the duration of the recommended quarantine period, paid time off for missed shifts in the case of possible restaurant closures, updated and improved protections for employees on the job, and standardized training for coronavirus prevention.

The requests come after McDonald's CEO Chris Kempczinski announced Friday that the company would cancel its Worldwide Convention in Orlando for directors and franchisees, opting instead to hold the forum online due to the coronavirus outbreak.

"This decision was not made lightly," Kempczinski said in a video statement. "I, for one, was really looking forward to my first convention as CEO and I appreciate the significance of this announcement for the system. We're not alone, companies and countries alike are reassessing large gatherings."

The demands also follow Monday's monumental announcement by Darden Restaurants to provide all hourly employees paid sick leave benefits for the first time, effective immediately. The effort positioned Darden — owner of Olive Garden, Longhorn Steakhouse, and Capital Grille, among others — as one of the first major US companies to shift worker policies and protections in response to the coronavirus.

McDonald's did not respond to Business Insider's request for comment on Fight for $15's demands.

How a lack of sick leave benefits hurts McDonald's workers

While Kempczinski said on Friday that the company is "taking measures" to protect employees and customers and has provided "tools and resources" for restaurant hygiene and cleanliness, McDonald's employees on Tuesday's call said they have received little information regarding how to stay safe.

Restaurant employees have simply been instructed to place hand sanitizer next to registers and take extra care to wipe down touch screens and bathrooms, they said.

"The company canceled a meeting of executives and franchisees, but it's not making any plans for us front-line workers, who cannot afford to take a day off without pay if we get sick," Fran Marion, a McDonald's worker in Kansas City, Missouri, said on the call. "For those of us working in fast food, we're living paycheck to paycheck with no paid sick days. We can't do our job from home and we can't skip work."

Maurilia Arellanes, a McDonald's worker from San Jose, California, who has worked for the company for several years, said she has already struggled without sick pay, citing an incident last year in which she had her hours slashed after returning to work after recovering from the flu.

"I was so sick and I could barely get out of bed," Arellanes said on the call via a translator. "When I came back I found out that I had lost many of the hours that I had worked. I went from working 35 hours a week to 27 hours. I have struggled to make my rent of $750 a month in a small room in a family home and have had to cut back on the money I can send back to my mother in Mexico."

McDonald's could join Darden in setting the standard

Marion and Arellanes were joined by Judy Conti, government affairs director of the National Employment Law Project, who spoke about the larger impacts of a large corporation like McDonald's — which has 14,000 locations in the US alone — taking action. In the US, 42% of service workers lack sick leave benefits, according to the Department of Labor.

Conti added that the US is one of few industrialized nations that does not have a standardized national policy for sick leave, an oversight she called "deplorable."

"Benefits are by and large available to well-paid people who have resources to weather such times, as opposed to low-income workers who missing a day or shift of work can throw their entire month off as far as bills, loans, housing," she said. "It's unconscionable."

More from Business Insider:
White Claw just launched 3 new flavors as it sets its sights on another summer of hard seltzer dominance
Amtrak's new CEO has a record of downplaying safety concerns that allegedly contributed to a fatal plane crash
Facebook bars employees from bringing friends and family to its offices and limits on-site interviews because of COVID-19 fears