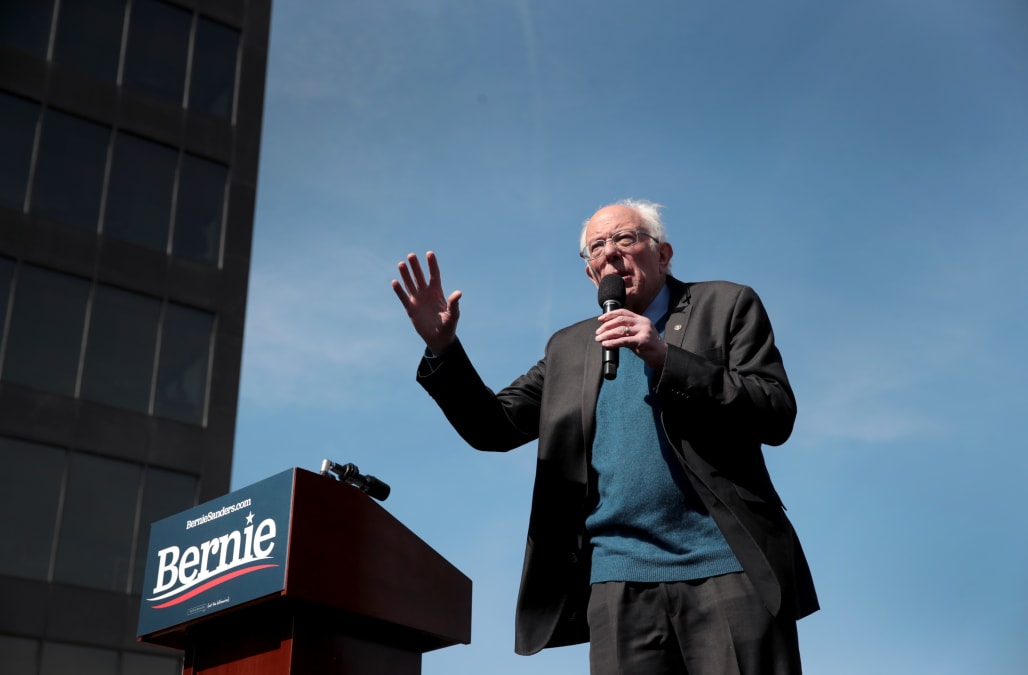 For a campaign known for exciting young people, Bernie Sanders has spent a lot of time lately focused on Social Security. The Vermont senator has a detailed plan and has sent surrogates to early states to focus on senior issues.

And after a disappointing Super Tuesday, Sanders focused on Social Security in a big way in recent days by lobbing a range of attacks against former Vice President Joe Biden over his record as states like Michigan and Florida get set to vote.

“We expect that it will be a powerful issue in the states ahead,” said senior Sanders advisor David Sirota in an interview with Yahoo Finance. “One of the reasons Bernie Sanders is the strongest general election nominee is because Trump cannot impugn Bernie's record consistently fighting to protect and expand Social Security,” Sirota said.

Sanders officials say voters are taking notice and there is some evidence to back them up. According to Google data, searches for “joe biden social security” have spiked since Super Tuesday. More people are currently searching for it than other, traditionally more common searches, like “joe biden ukraine”

Of course, other searches (such as “Joe Biden”) continue to be much more numerous but Google’s autocomplete function is suggesting “Social Security” when you put in the candidate’s name.

What the searchers (many of whom are coming from upcoming primary states like Michigan) are finding is a range of articles that bring up Biden’s background on the issue.

Since announcing his candidacy, Biden has consistently promised to raise Social Security benefits. At a fundraiser on Friday, according to a reporter who listened in, he once again discussed his commitment to protect Social Security.

The effort from Bernie Sanders and his allies is part of an attempt to cut into Biden’s overwhelming support among older voters. Biden has consistently dominated in that demographic. Even in Iowa, where Sanders won the popular vote and made Biden’s record on Social Security an issue, older voters still broke definitively toward the former Vice President.

“The Bernie campaign is leaning into that as a distinction between the two candidates left in the Democratic primary,” says Alex Lawson, a Sanders supporter and one of Washington’s most visible advocates for raising Social Security benefits.

Bernie’s case: Biden is ‘trying to erase his record from memory’

The focus on the issue has led to plenty of campaign barbs including a Twitter back and forth in recent days.

Get real, Joe. One of us has a history of not only fighting cuts to Social Security but working to expand benefits. And that’s why we are the campaign best positioned to defeat Donald Trump. https://t.co/WyQfY5IQyi

Biden has often responded by turning attention toward President Trump, who recently said, "Oh, we'll be cutting," when asked about entitlement programs at a Fox News town hall. “Here's the deal, folks: Social Security is on the ballot this year, and the choice couldn't be clearer,” read a recent Biden tweet. “I'll protect and expand it. Donald Trump will cut it and take it away.”

Sanders has tried to keep the focus on Biden. His campaign is currently running a TV ad called “Protect Social Security” that uses audio of a Biden speech from 1995 discussing freezing spending on programs like Social Security. Biden’s campaign responded on Saturday with its own ad saying Biden has always supported Social Security.

“He's trying to erase his record from memory. He's trying to pretend his record doesn't exist,” says Sirota. “We welcome that contrast because what Joe Biden's ad is doing is pretending that he never did this. It cuts to an honesty issue.”

As fact checkers have noted, some of the attacks from the Sanders campaign have gone too far, but they’ve also acknowledge that “[d]uring the 1980s and 1990s, Biden spoke in favor of freezes to Social Security as part of an effort to rein in all spending”.

Sirota says that if Democrats win the White House, the next president will be approached by Republican leadership with offers of a deal that will involve cutting Social Security: “Do you believe that Joe Biden will reject his entire career and reject the kind of deal that he has sought for 30 plus years?”

The Biden campaign did not respond to a request for reaction to Sirota’s comments.

The coming days with Social Security as a ‘central focus’

The question is whether all this action translates into voters changing their minds. A national poll taken after Super Tuesday found that Biden maintained a sizable advantage among voters who cited “Medicare / Social Security” as their number one issue. Biden also held a commanding position among poll respondents as a whole.

Lawson will be doing his part as a campaign supporter. “We need to be getting into places where seniors are consuming their news,” he says, adding, ”I'm going to be going out to a town hall with Bernie Sanders in Missouri on Monday, specifically focused on Social Security and protecting the seniors.”

As the Sanders campaign attempts to reverse Biden’s front-runner status, perhaps the most important moment will come at the debate at the end of the week just two days before Florida votes, on March 17. So far, the Democrats have met for 10 debates and the moderators have yet to ask a question about Social Security (although candidates have brought it up).

Next weekend’s matchup — which will almost surely only have just two podiums on stage — could change that.

Sirota predicts (or at least hopes) that “with both candidates now making this a central focus of the conversation, the debate moderators will focus, at least some of the time, on this issue.”

Ben Werschkul is a producer for Yahoo Finance in Washington, DC.

Where Biden and Sanders stand on retirement