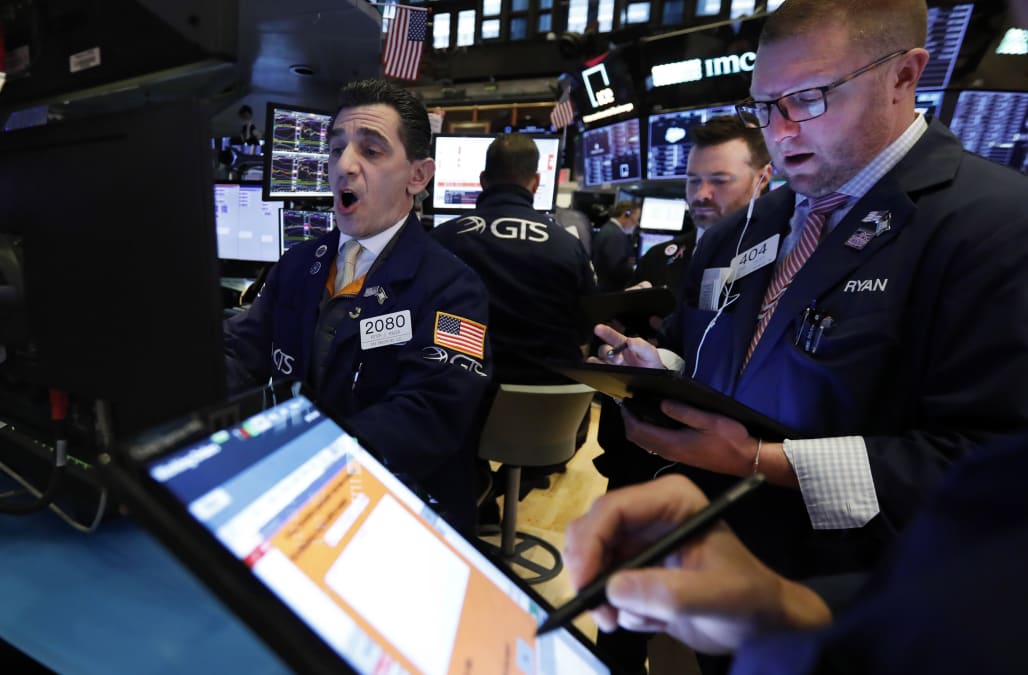 Wall Street was rocked in a volatile trading session on Monday that ended with the Dow Jones Industrial Average closing down 1,031 points — the worst day in two years for the blue-chip index, as fears increased over the global economic shock of coronavirus.

The market selloff came amid a significant uptick in reported cases of the disease in Europe, pushing investors to ditch stocks and buy up safe haven assets such as gold, which hit a seven-year high.

The disease has already choked Chinese production, bringing the world's second-largest economy to a standstill. After the outbreak spread to parts of northern Italy, there was concern that Milan, the country's financial epicenter, could also be hard hit. The Borsa Italiana, Italy's stock exchange, slid by 6 percent, its worst day in almost four years.

Monday's selloff came as South Korea raised the country's coronavirus alert to its highest level and Italy saw 130 new cases of the disease. While the World Health Organization stopped short of calling the outbreak a pandemic, it did note on Monday that the virus has "unlimited potential."

Scientists say the new virus, dubbed COVID-19, is both more easily transmitted and less deadly than the SARS epidemic, but much still remains unknown. As a result, Ian Shepherdson, chief economist at Pantheon Macroeconomics, said, “Markets are now slaves to the news flow.”

Investor reaction to the wider spread of coronavirus led to a volume of trading so heavy that some clients even had difficulty accessing their accounts, CNBC reported.

“Due to higher-than-usual volumes, some clients may have experienced delays in accessing some online features as the market opened but our systems are fine and up and running,” Schwab Public Relations told CNBC. Fidelity, the largest online broker, said, “Some clients are experiencing technical issues and we are working as quickly as possible to resolve."

The rate at which the virus was spreading in China appears to be slowing. An announcement of 409 new cases Monday was the fifth day in a row that the number of new daily cases had fallen below 1,000. Outside of China, though, a spate of outbreaks presented fresh cause for concern.

“The spike in infections in South Korea, mostly concentrated in the congregation of a single church, a surge in cases in Italy, and news of an outbreak in Iran, where the health care system is of uncertain quality and the government is secretive, has triggered fears that China's aggressive quarantining efforts won't keep the virus from spreading globally,” Shepherdson wrote in a client note.

“Global growth is likely to be impacted in a meaningful way due to fears of the coronavirus,” Chris Zaccarelli, chief investment officer for the Independent Advisor Alliance, said.

The challenge investors face is that no one knows how long this epidemic will last, nor how dangerous it ultimately will be to populations.

“Stock markets around the world are beginning to price in what bond markets have been telling us for weeks,” Zaccarelli said. “Bond yields have continued to move lower, despite the fact that stocks quickly shrugged off the coronavirus risks last month,” he said, adding that this indicated that the stock market’s initial resilience was unlikely to last.

Nigel Green, CEO and founder of the deVere Group, predicted that markets could fall by as much as 10 percent — a possibility he said most investors are not yet pricing into valuations. “Many investors remain complacent about the far-reaching impact of coronavirus, which is continuing to spread — and a faster pace. This will inevitably hit financial markets,” he said. “In general terms, stocks have hardly been deterred by the coronavirus outbreak. This complacency is concerning.”

Green added that the virus was emerging at a time when many key global economies were already vulnerable. “Coronavirus has struck at a time when major economies, including Japan, Germany, India and Hong Kong are facing a downturn due to other factors such as the U.S.-China trade dispute and political protesters, which could hit the world economy,” he said.

“This threat to global growth is real and should not be ignored,” Zaccarelli said, but he added that — provided the United States stays out of recession — the virus impact will be unlikely to hurt the retirement goals of long-term investors.

“We will move past this challenge, and the economic expansion will continue in 2020,” he said.