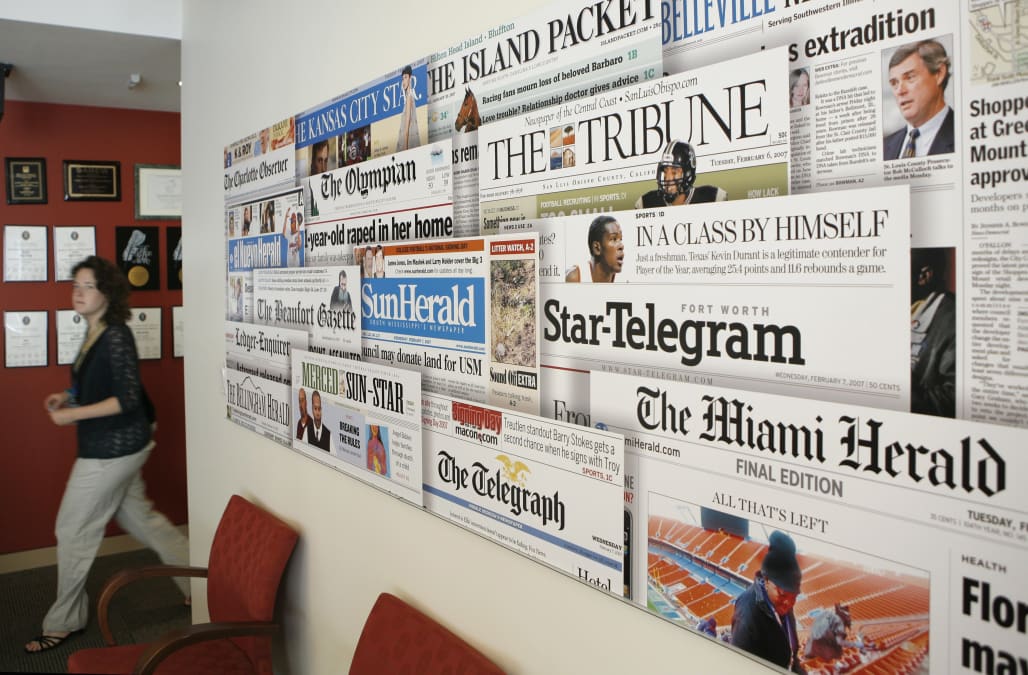 The publisher of the Miami Herald, The Kansas City Star and dozens of other newspapers across the country has filed for bankruptcy protection.

The newspaper industry has been devastated by changing technology that has sent the vast majority of people online in search of news. While McClatchy and others have pushed digital operations aggressively, advertising dollars have continued to flow toward internet giants like Facebook and Google.

McClatchy Co.'s 30 newsrooms, including The Charlotte Observer, The News & Observer in Raleigh, and The Star-Telegram in Fort Worth, will continue to operate as usual as the publisher reorganizes under Chapter 11 bankruptcy protection.

The publisher's origins date to 1857 when it first began publishing a four-page paper in Sacramento, California, following the California Gold Rush. That paper became The Sacramento Bee.

McClatchy has received $50 million in financing from Encina Business Credit that will enable it to maintain current operations for the company, which is still based in Sacramento.

“When local media suffers in the face of industry challenges, communities suffer: polarization grows, civic connections fray and borrowing costs rise for local governments," said CEO Craig Forman. "We are moving with speed and focus to benefit all our stakeholders and our communities.”

RELATED: Take a look at the biggest brands that filed for bankruptcy in 2019:

McClatchy expects fourth-quarter revenues of $183.9 million, down 14% from a year earlier. Its 2019 revenue is anticipated to be down 12.1% from the previous year. That would mean that the publisher's revenue will have slid for six consecutive years.

The company expects to pull its listing from the New York Stock Exchange as a publicly traded company, and go private.

McClatchy filed for bankruptcy protection in the U.S. Bankruptcy Court for the Southern District of New York. Its restructuring plan needs approval from its secured lenders, bondholders and the Pension Benefit Guaranty Corp.

McClatchy has suffered as readers give up traditional subscriptions and get news online and like other publishers, it's tried to follow them there.

Yet the migration to digital publications has not offset the loss of advertisers that once relied on newspapers.

The estimated total U.S. daily newspaper circulation including both print and digital in 2018 fell 8% from the prior year to 28.6 million for weekday. Sunday circulation fell 9% to 30.8 million, according to the Pew Research Center for Journalism and Media.

Last year, New York Times executive editor Dean Baquet bleakly predicted the demise of “most local newspapers in America” within five years, except for ones bought by billionaires. The Washington Post and Los Angeles Times, both national publications, are thriving after being bought by billionaires. The Boston Globe, Minneapolis Star-Tribune and Las Vegas Review-Journal are among other major American newspapers that appear to have steadied themselves after being sold to local wealthy individuals.

Even the arrival of moneyed interests can prove fleeting.

Two weeks ago, billionaire Warren Buffett said he was selling all of Berkshire Hathaway's publications; 31 daily newspapers in 10 states as well as 49 paid weekly publications with digital sites. Buffett is a lifelong booster of newspapers but he has said for several years that he expects most of them to continue on their declining trajectory, save for a handful of national papers such as The New York Times and The Wall Street Journal.

"McClatchy remains a strong operating company with an enduring commitment to independent journalism that spans five generations of my family,'' said Chairman Kevin McClatchy, the great-great grandson of the company founder, James McClatchy.

The company has also worked on its financials, trimming operating expenses by $186.9 million for the three-year period ended in December. It's also paid off about $153.5 million in debt in the same period.

Forman said McClatchy doesn't anticipate any adverse impact on qualified pension benefits for substantially all of the plan's participants and beneficiaries.

Josh Funk contributed to this report from Omaha, Nebraska.