Vaping flavor ban goes into effect Thursday, but many products will still be available 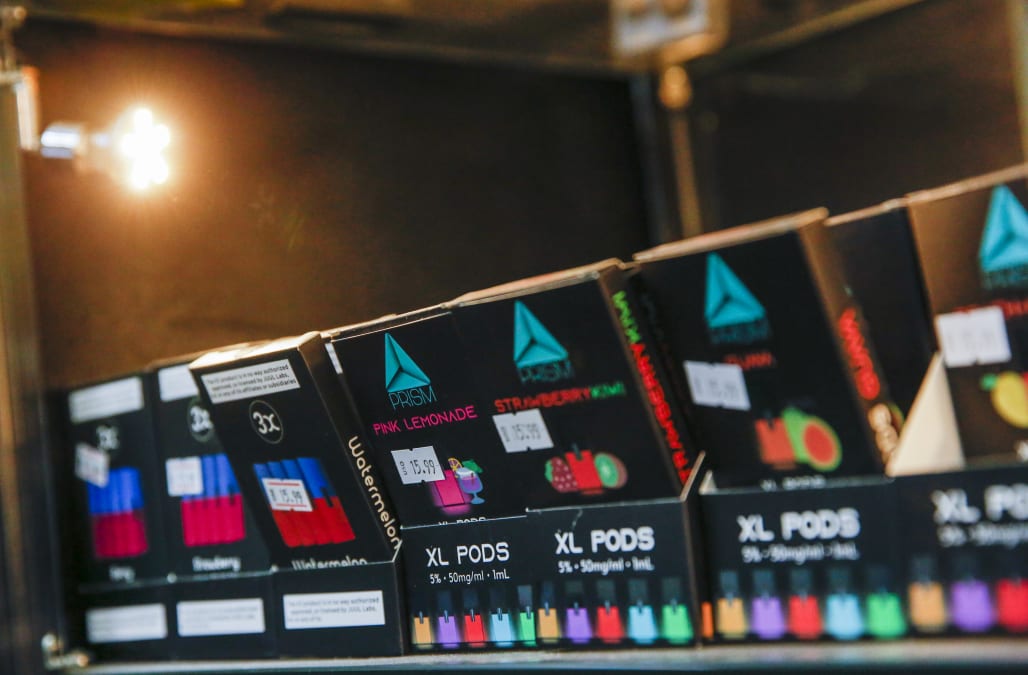 A nationwide ban on many flavored e-cigarette products goes into effect Thursday, but teenagers will still have access to nicotine vapes, experts say.

The ban covers a number of kid-friendly flavorings, such as mint and fruit, though menthol and tobacco flavorings will remain legal. However, the ban only applies to specific types of devices: cartridge or pre-filled pod devices, like the ones made popular by Juul. All other devices will be left on the market.

But limiting access to Juul, which stopped selling all non-menthol and tobacco flavored pods in November, is unlikely to have much of an effect on teens already addicted to nicotine.

Teenagers know that teachers are now educated about how to detect vaping in classrooms, she said. So they're getting their nicotine fix in other ways, including products not covered by the looming ban.

"Kids are sucking on flavored nicotine pouches to get through the day until they can get home to their device," Berkman said. The pouches are reminiscent of chewing tobacco, but are advertised as being "tobacco-free."

"I'm not very optimistic," Bonnie Halpern-Felsher, a professor at Stanford University who studies teen vaping, said. "We really do need to have enforcement of the law across all tobacco products, regardless of these loopholes."

"The new policy does not solve the problem," Matthew Myers, president of the Campaign for Tobacco-Free Kids, said, adding parents need to keep their guard up and educate their teenagers about the harms of nicotine addiction. "Millions of flavored products will remain available."

Plans for restricting e-cigarette flavors on a federal level first came up in September, when key national data on teen vaping was released. It was revealed that from 2017 to 2019, rates of vaping had more than doubled among 8th, 10th and 12th grade students.

That report coincided with the peak of a public health crisis: mysterious, severe lung diseases linked to vaping.

New cases of those lung illnesses have declined considerably since then. As of Jan. 21 (the latest data available), the Centers for Disease Control and Prevention reports that there have been 2,711 cases of people who've been hospitalized with EVALI, or e-cigarette, or vaping, product use-associated lung injury.

All 50 states, plus Washington, D.C., have reported EVALI cases. Sixty people have died. Many others were left with lasting lung damage.

Investigations suggested most cases were not associated with vaping nicotine, but instead THC, the psychoactive ingredient found in marijuana. Most of those THC vapes came from drug dealers or friends. Vitamin E oil has been the leading culprit in the lung damage, though other chemicals and additives can't be ruled out, according to the CDC.

After Thursday, companies that make any vape products — including those covered in the ban — will have to meet a May 12 deadline to apply to the Food and Drug Administration to continue selling their products.

It will take one year for the FDA to review those applications, during which time products can, and likely will, remain on the market.