These 21 states are raising their minimum wage for 2020 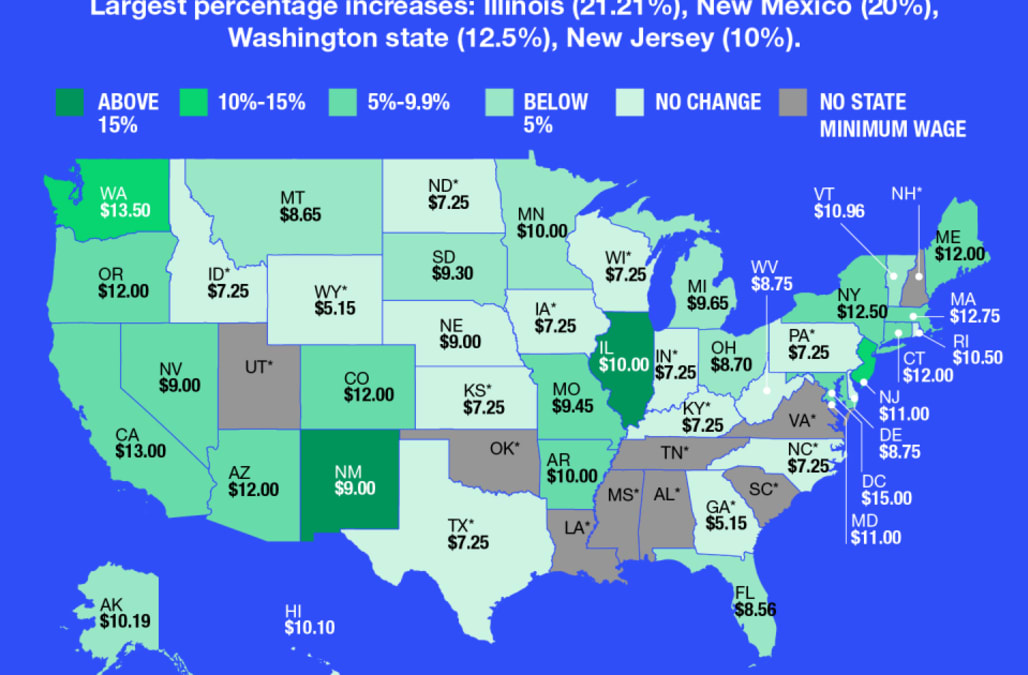 Twenty-one states are increasing their minimum wage for the new year with workers from Arizona to Vermont set to see an increase.

As Keith Mestrich, CEO of Amalgamated Bank and a fan of the wage hike noted on Yahoo Finance’s YFi PM, “It's going to be a really happy holiday for a lot of people around the country.”

Fourteen states have wage increases that are set to go into effect on Jan. 1 or Dec. 31. Seven more states — Alaska, Florida, Minnesota, Montana, Ohio, South Dakota, and Vermont — have automatic cost-of-living adjustments that will take effect on Jan. 1. Three more states and the District of Columbia have wage increases scheduled to take effect over the course of 2020.

A national debate over the minimum wage

Democrats passed a bill this summer in the House of Representatives to raise the federal minimum wage to $15 an hour by 2025. As expected, the bill has not been taken up the Senate.

Nevertheless, a variety of states have passed legislation to gradually raise their state minimum wages. Connecticut will reach a $15 minimum wage by 2023. A few areas, notably New York City and the District of Columbia, are set to have $15-an-hour minimum wages in 2020.

A New York Times analysis of the effective national minimum wage — an average across all federal, state and local minimum wage laws — found a rate of $11.80 an hour in 2019. According to the Times, “this is probably the highest minimum wage in American history,” adjusted for inflation.

The Democratic case to business leaders for higher minimum wages increases boils down to this: it’s not going to be as bad as you think. As Rep. Bobby Scott, who led the effort for the House bill, put it in an interview with Yahoo Finance’s Jessica Smith: “They'll have to adjust, but they're adjusting every year anyway.”

A key argument against raising to $15 is that it hurts the very people it’s trying to help. The National Restaurant Association opposed the House bill and — like many business groups — says their industry knows that “the wage hike is a job killer in their communities.”

The Employment Policies Institute, a fiscally conservative group owned by a public relations specialist for the restaurant industry, adds that “the majority of empirical research shows that a higher minimum wage reduces employment for the least-skilled while having little to no effect on poverty rates.”

Another study by a left-leaning group found that “the weight of that evidence points to little or no employment response to modest increases in the minimum wage.”

A study by the Congressional Budget Office found that gradually upping the federal minimum wage to $15 by 2025 would increase the wages for 17 million workers, but another 1.3 million workers would lose their jobs.

Rep. Scott doesn’t disagree that some workers would work less or lose their jobs. He notes “somebody that's working 10 months may only work nine months, but they would be making twice as much money during those nine months than they were, so they would be much better off.”

A key issue in the 2020 presidential campaign

With Congress not expected to act on the bill, the issue is instead playing out on the 2020 campaign trail. Nearly every Democratic candidate has expressed their support for a national $15-an-hour minimum wage with Fight for $15 being an important group in the Democratic primary.

Even President Trump has said he is looking at a federal minimum wage increase (but threatened to veto the Democrats’ bill for a $15-an-hour wage). On the 2016 campaign trail, he proposed an expansion of the Earned Income Tax Credit. The move would effectively bump the wages of working families at the lowest-wage levels.

Scott noted that the issue could be a good one for Democrats. “If we're going to set the tone that Democrats — all of the candidates — are in favor of a significant increase in the minimum wage, and all the Republicans are against it,” he says, “the workers can decide who is on the side of the workers, and who is not.”

Ben Werschkul is a producer for Yahoo Finance in Washington, DC.