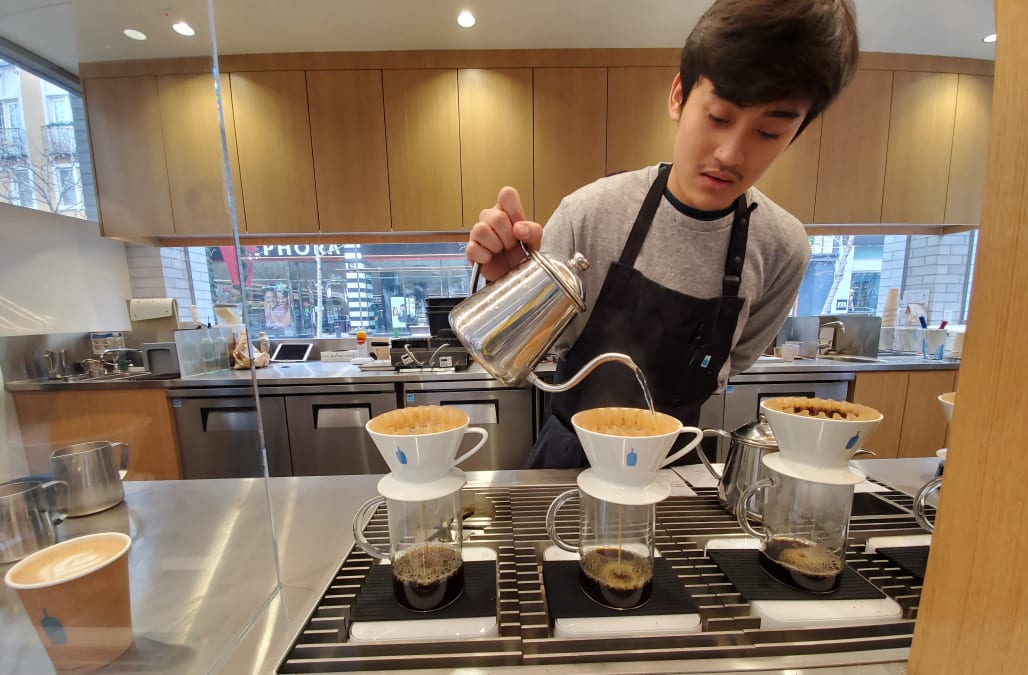 SAN FRANCISCO (AP) — A new cafe culture is brewing in the San Francisco area, where a growing number of coffee houses are banishing paper to-go cups and replacing them with everything from glass jars to rental mugs and BYO cup policies.

What started as a small trend among neighborhood cafes to reduce waste is gaining support from some big names in the city's food and coffee world.

Celebrated chef Dominique Crenn, owner of the three-star Michelin restaurant Atelier Crenn, is opening a San Francisco cafe next year that will have no to-go bags or disposable coffee cups and will use no plastic. Customers who plan to sip and go at Boutique Crenn will be encouraged to bring their own coffee cups, says spokeswoman Kate Bittman.

On a bigger scale, the Blue Bottle coffeehouse chain, which goes through about 15,000 to-go cups a month at its 70 U.S. locations, says it wants to "show our guests and the world that we can eliminate disposable cups."

Blue Bottle is starting small with plans to stop using paper cups at two of its San Francisco area branches in 2020, as part of a pledge to go "zero waste" by the end of next year. Coffee to-go customers will have to bring their own mug or pay a deposit for a reusable cup, which they can keep or return for a refund. The deposit fee will likely be between $3 and $5, the company said.

Blue Bottle's pilot program will help guide the company on how to expand the idea nationwide, CEO Bryan Meehan said in a statement.

"We expect to lose some business," he said. “We know some of our guests won't like it — and we're prepared for that.”

Larger coffee and fast-food chains around the U.S. are feeling a sense of urgency to be more environmentally friendly, and will no doubt be watching, said Bridget Croke, of New York-based recycling investment firm Closed Loop Partners, which is working with Starbucks and McDonald's to develop an eco-friendly alternative to the disposable coffee cup.

Despite the name, today's conventional paper cups for hot drinks aren't made solely from paper. They also have plastic linings that prevent leakage but make them hard to recycle, Croke said. She says it's unlikely large national chains will banish disposable cups, in the immediate term, or persuade all customers to bring mugs, so they're looking for other solutions.

Starbucks and McDonald's chipped in $10 million to a partnership with Closed Loop to develop the "single-use cup of the future" that is recyclable and compostable.

"They know there are business risks to not solving these problems. And the cup is the tip of the spear for them," said Croke, adding that Blue Bottle's choice of San Francisco for its test run is clearly the right market.

California cities have long been leaders in recycling and passing laws to encourage eco-friendly habits.

16 products to help you cut back on waste

This is the reusable alternative to plastic wrap. Just wash it in cool water with mild soap and let it air dry before using again. It's made with cotton and beeswax, jojoba oil and tree resin.

These dryer balls can replace your dryer sheets and fabric softener. Throw them in the dryer and they can can soften fabrics, reduce wrinkles and catch lint and pet hair.

Everything from the packaging to the brush handle to the bristles is eco-friendly. A 4-pack should last you a year, according to the brand.

Make your own sparkling water (or sparkling lemonade, soda and more!) with a SodaStream. This can also help you eliminate the waste of plastic bottles and aluminum cans.

You can find the carbonator (not included) here.

With these reusable filters, you can avoid throwing out those plastic K-Cups. Plus, you can fill them with any type of ground coffee you want.

Avoid the plastic bags at the grocery store and keep your produce in these reusable and washable produce bags. They're mesh, so you can even use them to wash and soak your produce.

Save your leftovers in these containers that are microwave, oven, freezer and dishwashwer safe. They beat out the plastic ones that get nasty food stains and melt in the microwave any day!

Take your snacks to work or store them in the fridge or freezer with these reusable bags made with FDA-grade PEVA material.

When making baby food or kids snacks (like applesauce), store it in these reusable squeeze pouches.

Replace your Swiffer pads with these reusable ones that pick up dirt and dust. They're dual-sided for both dry dusting and wet mopping.

Use the black side for mascara, lipstick and other pigmented makeup and use the white side for toner and moisturizer. Once you're done using, rinse with water and throw in the provided laundry bag, which can then be throw in with the rest of your laundry to wash and reuse.

This makeup remover pad takes things a step further and eliminates the use of any makeup removing cleanser or chemicals. Just use with water, wash and reuse. You'll refrain from wasting cotton balls and the plastic containers cleaners generally come in.

Ditch the plastic water bottles and drink out of a Swell water bottle. It keeps cold drinks cold for up to 24 hours and hot drinks hot for up to 12 hours. This one also comes with the sports cap, meant for taking to the gym and minimal spills.

This rainbow metal straw folds up into a small case and is made of food-grade stainless steel that won't rust and is FDA-approved.

These reusable straws are great for kids (and straw chewers). They come in a case with a cleaner and stay at a normal temperature when sipping on hot and cold drinks.

This year, the state became the first to ban restaurants from automatically handing out plastic straws with drinks. It was also the first, in 2014, to prohibit stores from providing disposable plastic grocery bags to shoppers, and bags at checkout now cost 10 cents.

Also this year, San Francisco International Airport became the nation's first major airport to stop selling water in plastic bottles. Water is now sold in glass bottles and aluminum cans, and travelers are encouraged to bring their own empty bottles to fill up for free.

Starting in January, cafes and restaurants in Berkeley will charge 25 cents for disposable cups, and San Francisco is considering similar legislation.

Anticipating the fee, a group of about a dozen Berkeley cafes teamed up in a mug-sharing program, where customers can rent a stainless steel cup from one cafe and drop it off at any of the others. Vessel, the Colorado start-up that provides the cups, has a similar program running in Boulder.

Many coffee drinkers in the San Francisco area are taking Blue Bottle's announcement in stride.

"Of course it's a good idea," said freelance writer Tracy Schroth, at a Blue Bottle cafe in Oakland. "It's such a small step to ask people to bring their own cup. People just have to get into the mindset."

At a Blue Bottle in San Francisco, electrician Jeff Michaels said he does love the coffee but doesn't want to pay more if he forgets a mug.

"I paid almost $7 for this coffee," Michaels said, sipping a cafe mocha. "How much are people willing to pay for a coffee?"

Small-cafe owner Kedar Korde is optimistic that one day it will become trendy for coffee drinkers to carry around reusable mugs, just like stainless steel water bottles have become a must-have accessory in the San Francisco area.

Korde's Perch Cafe in Oakland ditched paper and plastic cups in September, along with lids and straws.

"We now offer a glass jar that comes in a 12 ounce (350 milliliters) or 16 ounce (470 milliliters) size," Korde said. Customers put down a 50 cent deposit and can return it for a refund or keep it and get 25 cents off future drinks. The cafe also sells 50 cent reusable sleeves for the jars.

Korde says he's been surprised by how quickly customers have adapted. He was inspired to make the change after his 9-year-old daughter's school did a cleanup project at Lake Merritt, across from his cafe, and found their disposable cups in the water.

His daughter joked that she shouldn't have to clean her room if he couldn't keep his stuff out of the lake, but he took it more seriously.

"We're a small coffee shop. We're not going to save the world," Korde said. But at least “our cups are no longer winding up in the lake.”