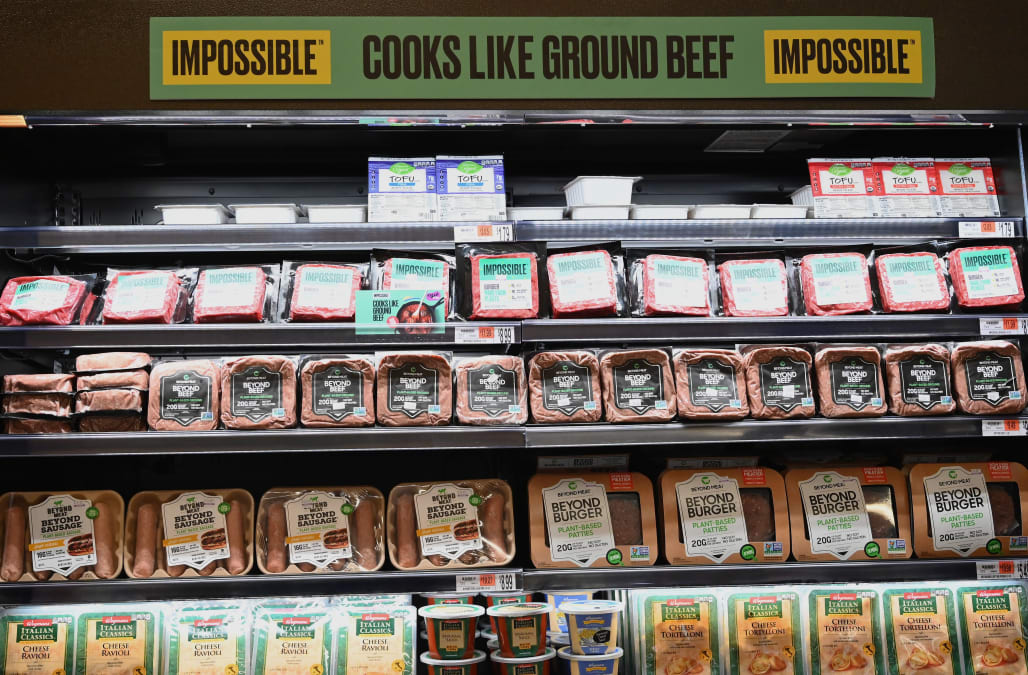 As plant-based protein makes it way on to more and more store shelves and restaurant menus, one senator says she wants to end “deceptive” labeling, which she worries could be fooling consumers.

“I think we're seeing a number of fake food fads that are going on and we want to make sure that consumers know what they're buying,” said Fischer. “When you look at a lot of the plant-based meals that are being put out there, they're trying to piggyback on really, really good nutritious, safe beef.”

The senator told Yahoo Finance she had “big concerns” about the impact of plant-based protein on the ranching industry in her state.

“Ranching and the production of livestock, to provide safe beef across this country, is an economic engine in the state of Nebraska,” said Fischer. “It produces over a $13 billion economic impact on the state.”

The bill would codify the definition of “beef” as meat derived from cattle and require plant-based products that mimic animal meat to include the word “imitation” on the label. The word “imitation” would have to be in “uniform size and prominence” before or after the food name — along with a statement that the product contains no meat.

“If it's imitation, it should be labeled imitation. If it's real beef, there's one ingredient — and that's beef. If it's an imitation, like Beyond [Meat] burgers or the Impossible burgers, they have over 20 ingredients,” said Fischer in an interview with Yahoo Finance. “It shouldn't be confused with real beef.”

The plant-based protein industry, which includes companies like Beyond Meat and Impossible Foods, argues consumers already know what they’re buying and eating.

“Impossible Foods stands for truth and transparency. That’s why our products are clearly labeled ‘made from plants,’” said a spokesperson for Impossible Foods in a statement. “There is no evidence of consumer confusion. In fact, our extraordinary sales growth is due precisely to the fact that consumers are seeking and buying plant-based ingredients at record levels.”

What’s on the label?

The Real MEAT Act would also strengthen the government’s ability to take action against mislabeled products.

“Real beef has to go through a very rigorous labeling and inspection process. That's not true with this product that we're seeing now in grocery stores,” Fischer said.

The Plant-Based Foods Association blasted the provision as an “unprecedented power grab.” Earlier this month, PBFA released its voluntary labeling guidelines for the industry. The standards allow for references to animal meat (i.e.: hamburger or chicken) with qualifiers like “plant-based,” “vegan,” “veggie,” “made from plants,” etc.

But Fischer argues that putting the word “imitation” on the label will clarify any confusion.

“A lot of times we're seeing some false advertising, I think, and really some smear campaigns. You have the plant based products... they look like beef. They have the appearance and beef,” she said.

Some lawmakers and dairy farmers have made similar arguments about branding almond milk and soy milk as “milk.” Fischer doesn’t want beef to suffer the same fate as cow milk.

“It's a road that we shouldn't be going down. You know, almonds don't produce milk. That’s a false label, but that's caught on now and that's in the grocery stores all the time. Obviously soy does not produce milk — that's plant-based. It should be labeled that way,” said Fischer. “It’s for consumers’ education, for their choice.”

Lawmakers introduced a bipartisan version of the bill in the House earlier this year. Yahoo Finance reached out to Beyond Meat but the company has not responded yet.

Jessica Smith is a reporter for Yahoo Finance based in Washington, D.C. Follow her on Twitter at @JessicaASmith8.

More from Aol.com:
The U.S. is fighting a french fry shortage because it's been so cold
Toys R Us makes its return: here's what you need to know about the store
Taco Bell officially enters the fried chicken wars