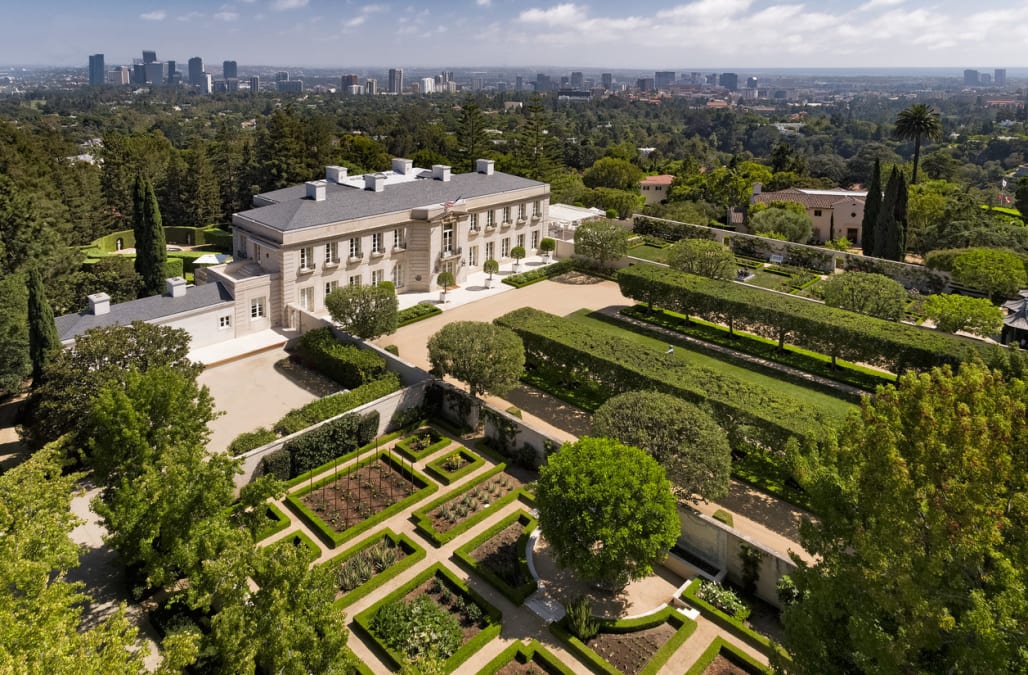 Chartwell, the Bel Air compound long considered one of L.A.’s most epic estates, has transferred for an unprecedented $150 million, easily enough to rank as the most expensive California home ever sold. The amount is also the second-biggest on record in the entire U.S., behind only hedge fund billionaire Ken Griffin’s $238 million splurge on a four-floor New York penthouse.

According to real estate sources, the $150 million deal included not just the four-parcel main Chartwell compound — which itself spans more than 10 contiguous acres — but also the 1.3-acre vacant lot immediately lot next door, which was formerly the site of Ronald Reagan’s longtime L.A. residence. Following Nancy Reagan’s 2016 death, her heirs sold that estate for $15 million to Chartwell’s longtime owner, billionaire media tycoon Jerry Perenchio, who razed the existing house shortly before his own 2017 passing.

In summer 2017, the entire compound was first listed with an elephantine — and ultimately unrealistic — $350 million ask. Over the next two years, the pricetag was hacked down to a slightly more reasonable $195 million, and the final transfer amount, while less than half the initial ask, utterly blows the previous California record-holder away. That previous sale, incidentally, was set mere months ago — $119.7 million for The Manor, with a buyer widely suspected to be a member of Abu Dhabi’s royal family — indicating there really is a verifiable market, however niche, for nine-figure homes in Los Angeles.

Although the official grant deed hasn’t made its way into property records, word on the Platinum Triangle street is that the record-setting Chartwell buyers are Lachlan Murdoch, the elder son of multibillionaire media mogul Rupert Murdoch, and his model/actress wife Sarah (née O’Hare).

Now in his 40s, Murdoch is co-chairman of News Corp, the mass media and publishing empire founded by his father, and the executive chairman and CEO of Fox Corp, the Manhattan-based holding company that controls Fox News, Fox Business, and Fox Sports.

It’s not particularly surprising that a Murdoch would be in the market for an outrageous new residence. Earlier this year, amid a veritable avalanche of publicity, their 21st Century Fox assets were sold in a $71.3 billion deal to Disney. The deal sent the family’s net worth soaring — 88-year-old Rupert Murdoch alone is worth nearly $20 billion, up $8 billion from two years ago, according to Forbes.

The Bel Air estate
Aerial view of Bel Air Los Angeles neigborhood with mansions and golf course. Bel Air, Los Angeles County, California.
Scattered houses on one of the hills of Bel Air neighborhood, Los Angeles, California
Early morning sunlight shines on a large estate home in Bel Air California.
"Gate at entrance to Bel-Air in Los Angeles, CA."
"Los Angeles, United States - May 29, 2012: Gate located at the entrance to the affluent residential community of Bel-Air along Sunset Boulevard, just north of the UCLA campus."
View from the Getty Centre to the east, across the San Diego freeway, to Bel Air ( left) and UCLA campus (right). In the distance is Wilshire Boulevard winding towards downtown Los Angeles.
Aerial view of highway 405 with heavy traffic; the hills of Bel Air neighborhood in the background; Los Angeles, California
Up Next

Set in the proverbial heart of East Gate Bel Air — arguably the city’s most exclusive and desirable residential neighborhood — the titanic complex is anchored by an imperial chateau-style mega-mansion with nearly 25,000 square feet of living space. Vast, painstakingly manicured gardens surround the house, and there is an additional 5,700 sq. ft. guesthouse designed by Wallace Neff, a lighted tennis court, and a warehouse-sized subterranean garage that can accommodate dozens of luxury vehicles.

The main house, originally constructed in the 1930s, was built by a wealthy real estate developer as a gift for his wife. Unfortunately for him, however, she reportedly “hated” the home’s unrestrained opulence and refused to occupy the premises; thus, the property remained vacant until the 1940s, when it was acquired by hotelier Arnold Kirkeby. In the 1960s, the house was prominently featured on “The Beverly Hillbillies,” hit TV show and in 1986, the Kirkeby family sold the palatial estate to Perenchio, who subsequently spent untold millions and many years on a budget-free remodel and expansion of the compound.

But perhaps the property’s most outrageous feature, however, is its 75-foot resort-style swimming pool and adjacent pool house, which are connected to the main house by a meandering underground tunnel and an elevator.

Of course, Lachlan Murdoch and his family are hardly new to L.A. — back in 2015, he paid $12.5 million for a “starter” home in Brentwood’s Mandeville Canyon neighborhood. His father still owns a $28 million vineyard estate in a different corner of Bel Air, and his brother James presides over a $30+ million Wallace Neff-designed mansion high in the mountains above Beverly Hills.