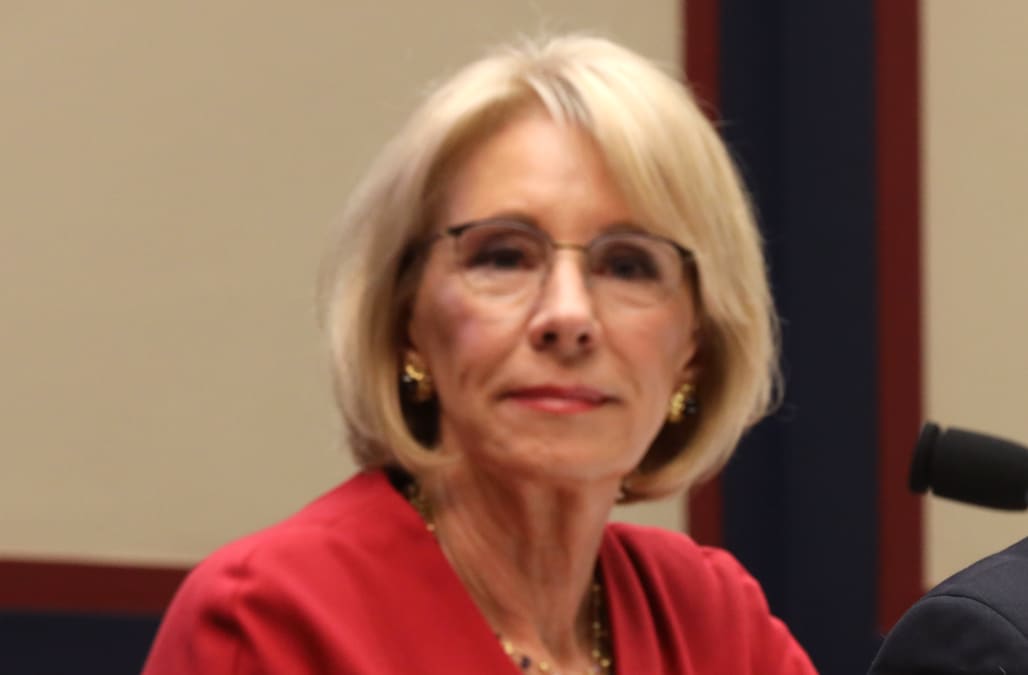 Education Secretary Betsy DeVos told a Congressional hearing on Thursday that processes implemented by the Obama administration is the reason why the Education Department (ED) has been stalling on loan forgiveness requested by more than 200,000 defrauded students.

Speaking at a hearing in front of the House Committee on Education and Labor for the first time in eight months, DeVos blamed the Obama administration for not putting proper processes in place and granting defrauded students debt relief claims haphazardly.

“When borrower defense arrived in 1995, it ... was little used… in the 20 years from 1995 to 2015, fewer than 60 claims were filed,” shhe said. “Then, the previous administration weaponized the regulation against schools it simply didn’t like. They applied the law in a discriminatory fashion. So since 2015, there has been a 5,000% increase in borrower defense claims.”

Under existing law, borrowers with federal loans are eligible for loan forgiveness if a college or a university has misled them or engaged in other misconduct in violation of certain state laws.

And in 2015, after for-profit giant Corinthian Colleges closed down, the number of debt relief or loan forgiveness claims skyrocketed. The Obama administration then created special rules to address the problem, making it easier for defrauded students to get their loans cleared — with some getting automatic loan forgiveness if they qualified.

‘They left tens and thousands of claims behind’

“In fact, the prior administration was encouraging claims to be filed knowing full well it lacked the ability to even accurately track them,” DeVos told the hearing. “It knew that the department couldn’t quickly and legally give blanket forgiveness of all loans. So when they left office, they left tens and thousands of claims behind.”

Prior to the new education secretary’s arrival, ED officials reviewed thousands of borrower complaints against Corinthian Colleges, ITT Technical Institute, and other now-defunct for-profit colleges. The veteran officials concluded that the defrauded borrowers deserved to be fully relieved of their student debts.

But DeVos overruled the analysis. And on Thursday, DeVos vowed to pull back the Obama administration’s “overreach” and makes sure taxpayers and schools are treated “fairly.”

To enact her policy, Devos recently released a new methodology to determine which borrowers qualify, which was published on Tuesday night. Experts and critics immediately asserted that DeVos is just stalling even further on debt relief for defrauded students.

DeVos insisted that her new formula was “scientifically robust.”

“Ultimately what the department wants… is to provide fair relief to all those borrowers who actually have been harmed,” she told lawmakers on Thursday. “I want to be very clear — students are my number one priority… so if students have been deceived by institutions, and suffered financial harm as a result, they should be made whole. But if claims are false… then hardworking taxpayers including those who scraped and saved to faithfully pay their own student loans should not have to pay somebody else’s student loans too — it’s a matter of fairness.”

She added: “Simply discharging all of these loans as some on this committee suggest be done is not fair to taxpayers nor to those who have paid or are paying their loans.”

DeVos is ‘out to destroy public education’

Democrats tore into DeVos’ refusal to grant full relief without going through each and every claim.

“I have worked in education my entire life. … I’ve worked with Democrats and Republicans. … I’ve had some honest disagreements with my friends in the Republican Party about how to move education forward,” Rep. Frederica Wilson (D-FL) said. “But I’ve never, not one time, believed that they were out to destroy public education, until I met you. Why has every decision you’ve made harmed students instead of empowering them.”

She added: “You are supposed to be their champion. … you are the most unpopular person in our government. Millions will register to vote in 2020. Many will vote to remove you more than to remove the President.”

Rep. Wilson wasn’t the only one displeased with DeVos’ responses.

“Did you not state that at the very beginning of your testimony that students are your number one priority?” Rep. Susan Wild (D-PA) said. “Because listening today, I have a hard time believing that a defrauded borrower would think that you are in their corner.”

Rep. Josh Harder (D-CA) asked: “Are you deliberately violating this federal court order because you are too corrupt to uphold the law, or because you’re too competent to do your job?”

“I don’t need to sit and listen to what you just spewed out of your mouth,” responded DeVos.

Aarthi is a writer for Yahoo Finance. She can be reached at aarthi@yahoofinance.com. Follow her on Twitter @aarthiswami.