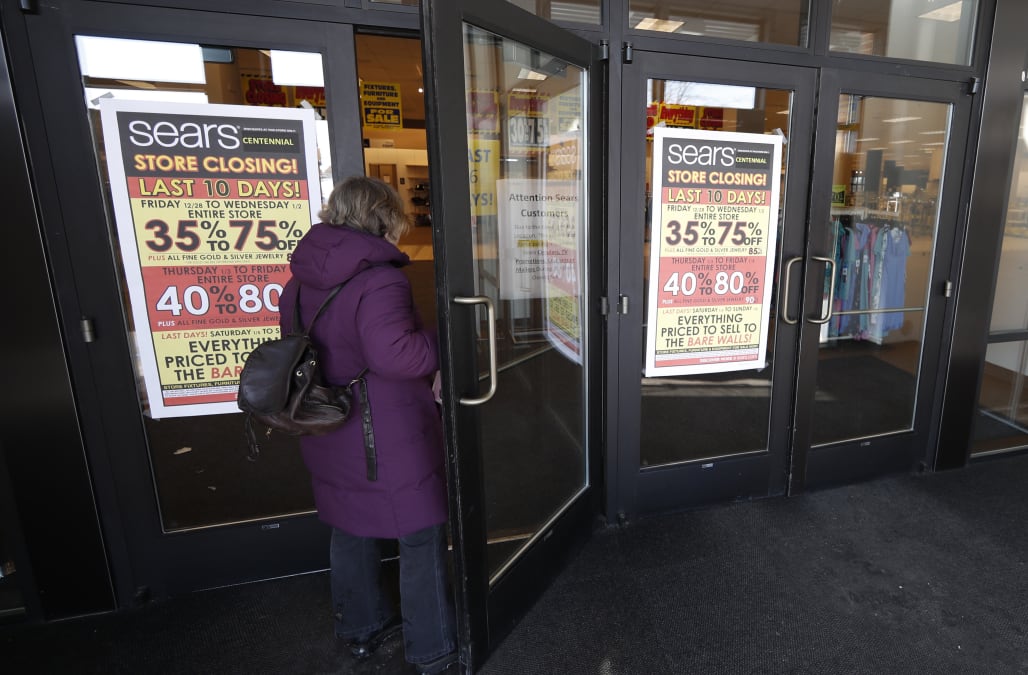 NEW YORK (AP) — Nearly 10 months out of bankruptcy, Sears is limping into the holiday shopping season.

Eddie Lampert, the hedge fund billionaire who promised to save 425 Sears and Kmart stores and roughly 45,000 jobs when he bought the company out of bankruptcy, has seen his $5.2 billion lifeline wither.

While there were plans for new small stores centered on appliances, only three have opened. The chain is still shrinking. By February, the store count will be down to 182.

Many of the stores that remain have the same old problems. They’re grungy and understaffed, poorly stocked and losing vendors. At the end of the year — a crucial time for retailers — Sears’ threadbare Black Friday catalog signals it’s going to have problems getting shoppers to its doors. And online, it can’t compete with Amazon and its traditional rivals.

“They used to be top of mind, particularly during this time of year,” said Coye Nokes, a partner at OC & C Strategy Consultants. “Now, they’ve faded into the landscape. They’ve become irrelevant.”

The ever-shrinking Sears means more job losses. Thousands of jobs are gone, although Sears’ owner through a spokesman declined to say how many since Lampert bought the company out of bankruptcy in February. There are fewer choices for shoppers and suppliers. It also puts more pressure on malls, which must figure out how to fill the gaping holes left by Sears.

Lampert’s failure comes as no surprise to industry experts. He was the only buyer who offered Sears a lifeline at all — other bidders just wanted to liquidate the chain — but he had already presided over a long decline of Sears going back more than a decade.

The signs at Sears are ominous heading into the holidays, when retailers acquire new customers.

Black Friday was bleak at its store in Jersey City, New Jersey, where an unplugged Christmas tree sat on top of a round table by the entrance. Few shoppers were in the store and the toy section had no Legos or Hatchimals, even though signs indicated they would be there.

A store needs to have stuff on its shelves to attract customers, and Sears is having issues with some suppliers cutting it off. One vendor, Stolaas, has stopped selling refurbished Apple gadgets on Sears’ website because it wasn’t getting paid, said David Wander, a bankruptcy attorney at Davidoff Hutcher & Citron who represents Stolaas.

The supplier issue is showing up in Sears’ advertising. Its revised circular for Black Friday had eight pages of deals, less than a quarter of the size last year, according to Edgar Dworsky, founder and editor of Boston-based consumer advocacy website Consumer World. None were for major electronics — one of the reasons people used to go to Sears.

Lands’ End, a clothing brand that was once a big draw when Sears purchased it in 2002 but was spun off in 2014, is nearing the end of its remaining leases, due to expire next month. Now, Lands’ End clothing is on clearance, and Sears was even selling its mannequins at the Jersey City store for $75, with an additional 60% Black Friday discount. Empty paint cans were marked down to $2 each with the discount.

Peter Doliente bought himself a Seiko watch at the store for $200, down from $500.

“There’s not much customers around,” the teacher from Jersey City said. “I was surprised when I went to the parking lot. Normally it would be packed at this time.”

Sears once towered over the retail landscape but has been on a slow decline for years. Lampert combined Sears and Kmart in 2005, pledging to return Sears to greatness. That didn’t happen. Sears was hit hard during the recession a decade ago and never recovered.

Selling well-known brands, like its Craftsman tools, and spinning off stores were cash infusions that helped Sears survive. Lampert lent some money of his own, but critics say he never invested in the stores, which grew increasingly dingy.

Even after all of Sears’ pain, Lampert argued during its bankruptcy that he was its best chance. Industry experts remain skeptical of his ability to revive Sears, saying he is still neglecting stores.

“I don’t think this was a surprise to anyone,” said Scott Stuart, CEO of Turnaround Management Association, whose members include corporate turnaround experts and store liquidators. “It was more a surprise that (Lampert) publicly determined that this was something salvageable.”

In a statement, Transform Holdco, the owner of Sears managed by Lampert, said that it “faced a difficult retail environment and other challenges” and it’s working to “prune its operations.” The company said in November that it got another $250 million in financing.

That’s no solace to employees like Victor Urquidez, the assistant manager at a Sears Auto Center in Chula Vista, California, who said he will be losing his job when the store closes in late December.

“We were expecting it,” said Urquidez, who has watched deliveries shrink from 100 tires at a time two years ago to nine today. “We knew it was going to happen.”

What comes next for Sears? There’s little optimism. While there are plenty of vendors still sending in goods, the rescue plan has barely begun and shoppers simply have far better options elsewhere.

This story has been corrected to show the watch buyer is Peter Doliente, not Dolente, and the CEO of Turnaround Management Association is Scott Stuart, not Stewart, and the store count by February will be 182, not 128.

More from Aol.com:
Peloton's cringeworthy new holiday ad is sending the internet into a frenzy
Starbucks is changing its employee dress code for the first time in years
JetBlue is offering hundreds of flights for under $40