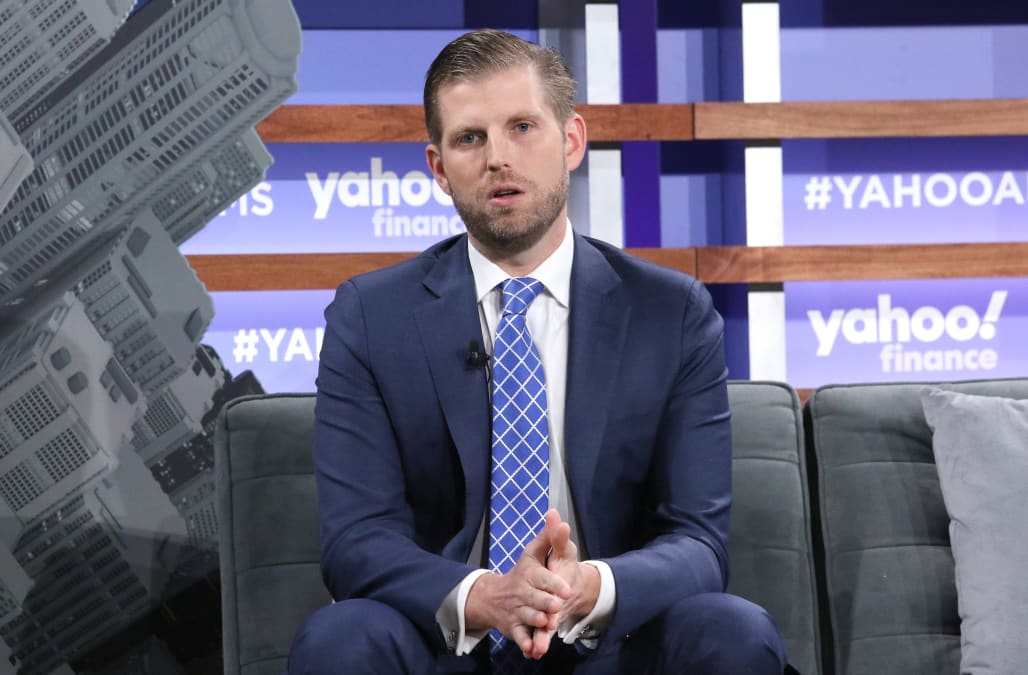 Eric Trump has been one of his father's staunchest defenders and he took his criticisms of president’s political opponents to another level on Thursday.

After noting that Former Vice President Joe Biden has been in politics longer “than I have been alive,” he said that politics is inherently corrupt and "creates an evilness."

Trump spoke with Yahoo Finance anchor Adam Shapiro at the Yahoo Finance All Market Summit in New York City on Thursday about running the Trump Organization. Trump has been running the family business with his older brother Don Jr. since their father became president in 2017.

He said that Hunter Biden made $600,000 a year working for "a little company in Ukraine" but that it’s systematic of a larger problem – of people going to Washington who then "never want to leave." "It's very very sad," he said.

Board members of Exxon Mobil (one of the worlds largest and most prestigious energy companies) make $330,000 annually.

Hunter Biden, with no industry knowledge or duties, was being paid $600,000 annually.

All of this while the average annual salary in Ukraine is $1700 per year.

Despite the repeated allegations from President Trump and his allies, Ukraine’s prosecutor-general told Bloomberg in an interview that he had no evidence of wrongdoing by Joe Biden or his son. Yuriy Lutsenko said in the interview that "Hunter Biden did not violate any Ukrainian laws."

Trump repeatedly swatted away questions about the Trump Organization's own apparent conflicts of interest. Trump, for example, has many business ties with Turkey. The Trump Towers in Istanbul is nearly 40 stories tall and described by the Trump organization as "a landmark in the historic city of Istanbul." Turkey's president, Recep Tayyip Erdoğan, attended the opening in 2012.

In a phone call this past Sunday, President Trump gave Erdoğan the go ahead for a military action against Kurdish forces in Northern Syria who have long fought alongside Americans. “We are out of there,” President Trump said on Wednesday.

During the conversation with Yahoo Finance on Thursday, Eric Trump touted the Istanbul towers and said licensing deals had allowed the Trump Organization to work with partners to get access to different worldwide markets. Creating ties with local officials gives local access that “you don’t know if you are trying to go into in Turkey,” he said.

Throughout the wide-ranging conversation, Eric Trump saved his harshest words for Democrats but also suggested that politics was corrupting for both sides of the aisle. When Mitch McConnell, who has been in the U.S. Senate since 1985, was brought up, Trump noted that, "I think it's systematic in politics," and that "money has corrupted politics in a big way and it's very, very sad."

“Let’s use Ted Cruz and Bernie Sanders just as a comparison,” he said. “In New York, they’ll be best friends because they have one goal in mind and that’s to build the greatest company or to develop the greatest widget.” But he added that in politics “what really motivates people? Oftentimes it’s greed.”

“They are fighting to retain power and it’s something we’d never really come across as a family before,” Eric Trump said. “We’d always been on the opposite side.” While President Trump and his allies often describe him as new to politics, he dabbled in the public arena for many many years. In October 2000, for example, Donald Trump announced the creation of a presidential exploratory committee as a candidate of the Reform Party. He ended the campaign about five months later.

Eric Trump added a comparison between the Trump campaign’s two worlds. “I always thought that New York real estate was the most cutthroat industry,” he said. “It pales in comparison to politics.”