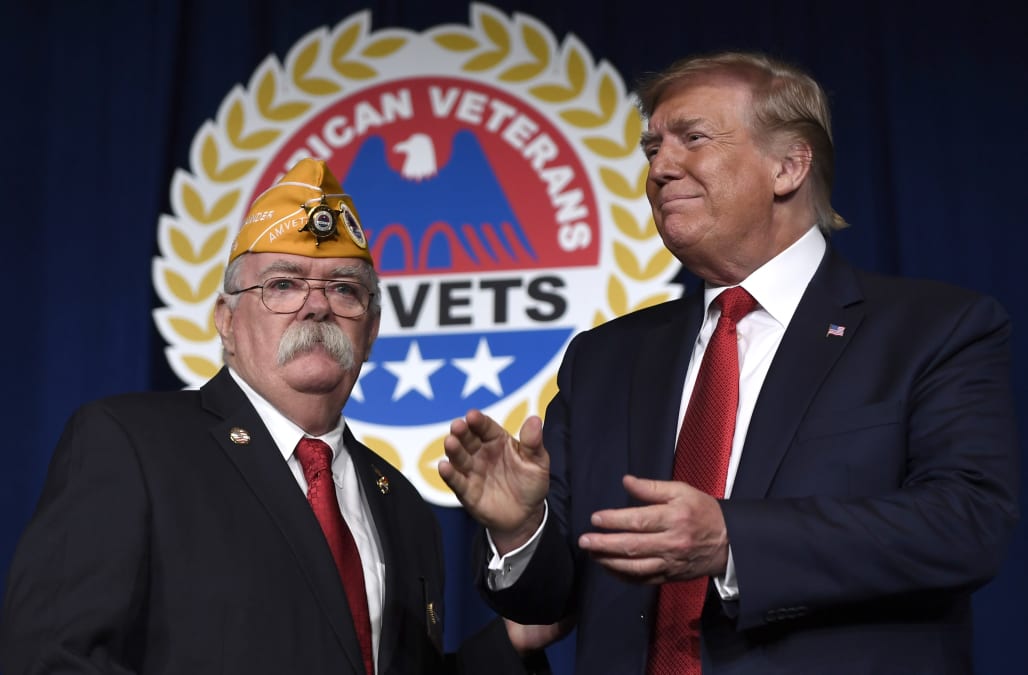 LOUISVILLE, Ky. (AP) — Hundreds of millions of dollars in federal student loan debt owed by tens of thousands of disabled military veterans will be erased under a directive President Donald Trump signed Wednesday.

Trump ordered the Education Department to "eliminate every penny of federal student loan debt" owed by American veterans who are completely and permanently disabled.

Trump said they won't have to pay federal income tax on the forgiven debt and called on states to waive their taxes on the loans, too.

America, he said, owes its heroes "a supreme debt of gratitude."

Trump's announcement at the AMVETS national convention in Louisville elicited a loud round of applause from the crowd of more than 2,500 veterans. He signed the directive after addressing the gathering.

Only about half of the roughly 50,000 disabled veterans who qualify to have their federal student loan debt forgiven have received the benefit, and the administration blames a "burdensome" application process.

The document directs the government to develop an expedited process so veterans can have the debt discharged "with minimal burdens."

The action will wipe out an average of $30,000 in debt owed by more than 25,000 eligible veterans, Trump said, calling them "incredible people" who have made "the ultimate sacrifice, in many ways, for our nation."

The 10 US states with the most debt

Hawaii comes in second with a debt-to-income ratio of 2.1. On average Hawaiians make slightly more than Golden State residents. The median income in Hawaii is $31,905 as compared to $28,068 in California. Residents of Hawaii also have slightly more debt per capita than those in California: $67,010 to $65,740. Hawaiians have the second-highest proportion of debt tied up in mortgage. In total, $51,770 out of the total $67,010 in per capita debt that Hawaiians hold is owed on mortgages. That means 77% of per capita debt is mortgage debt.

Virginia comes in third with a debt-to-income ratio just below 2. The average Virginian makes about $31,557 and has $62,520 in debt. One reason why lenders may feel safe lending to Virginians, allowing them to have a high debt-to-income ratio, is their low delinquency rates. Only 1.27% of mortgage debt in Virginia is delinquent by at least 90 days. That is the 13th-lowest rate in the country. Virginia also has a relatively high proportion of its debt in student loans (7.76%).

Of Colorado’s total debt, 6.85% is tied up in automobile debt. That’s the second-highest rate in the top 10. However it is quite a bit lower than the national average of 9.57%. Overall there is not much separating Colorado from Virginia: Colorado has a debt-to-income ratio of 1.96. The median income in Colorado is $31,664 and the per capita debt is $62,200.

Almost 15% of all debt held in the nation’s capital is owed on student loan debt. All that higher education may be paying off though. D.C. has the highest median income in the country and over half of the population over the age of 25 has at least a bachelor’s degree. In fact, there are more people over the age of 25 in D.C. with a graduate degree (32.3%) than there are with only a bachelor’s degree (23.8%). The capital also has the lowest percent of debt in the country tied up in auto loans (3.35%), probably due to the accessible public transportation available in the area.

Oregon has a debt-to-income ratio of 1.89. On average Oregonians make less than many other states in the top 10. The median income in the Beaver State is $26,188, according the U.S. Census Bureau. Oregon also has the least per capita debt in the top 10, at $49,550 per resident. For the most part Oregonians choose to go into debt to buy homes. Over 72% of overall debt is held in mortgages. One area where Oregonians struggle is in paying off credit card debt. Just over 7% of all credit card debt in the state is delinquent. One way to eliminate credit card debt is using a balance transfer credit card. With a balance transfer credit card, new users typically have a limited time to make no-interest payments.

Washington, Oregon’s northwest neighbor, comes in eighth for highest debt-to-income ratio. The state has the third-lowest percent of debt tied up in student loans (6.29%) but the third-highest percent of debt tied up in mortgages (75.35%). Washingtonians also tend to be some of the most responsible holders of debt in the country. They rank above average in delinquency rates on all types of debt and rank in the top 10 for lowest rates of auto loan delinquency and credit card delinquency.

On average Massachusetts residents earn about $32,352 per year and have about $59,820 in debt per capita. That works out to a debt-to-income ratio of 1.84. Once again, like other states, the majority of that debt is mortgage debt. About 72% of per capita debt in the Bay State is mortgage debt. The state’s residents don’t take on as much credit card debt as other states do. About 5.45% of per capita is tied up in credit card debt.

Trump also used his appearance to highlight steps the administration has taken to bolster the military, including increased spending and new equipment. He also discussed the administration's commitment to veterans, including helping them access health care, reducing opioid addiction and minimizing suicide among those no longer in uniform.

Trump said the administration is "determined to do everything in our power" to end suicide among veterans. About 20 veterans end their lives every day.

Trump promoted the drug Spravato, a new Johnson & Johnson nasal spray approved for treatment-resistant depression. He said he had instructed his administration to get as much of the drug as possible from the New Jersey-based consumer products company.

Trump said Johnson & Johnson has done so well and "made so much money" that they "should give it to us for free."

Johnson & Johnson said in a statement that it is having discussions with the Department of Veterans Affairs and other payers to ensure "affordable access" to Spravato for its use in patients with treatment-resistant depression. The drug is sold to the federal government at discounted prices, the company said.

After the speech, Trump went to a nearby hotel to headline a fundraiser for Republican Gov. Matt Bevin, who is seeking reelection against Democratic state Attorney General Andy Beshear in what's shaping up to be a close November election.

Bevin, who plays up his ties to Trump in pitching for a second term, quickly boarded Air Force One after it landed in Louisville so he could be photographed accompanying Trump off the presidential aircraft.

Trump recently promised to hold a campaign rally for Bevin and said Wednesday that Bevin "has been a truly great governor." Trump's reelection campaign has not announced a date for a Kentucky rally.

McConnell is seeking reelection next year to a seventh Senate term and is facing a stiff challenge from Democrat Amy McGrath.

Trump said he'd return to Kentucky to bolster both candidates.