Retirees are flocking to these states — but they shouldn’t 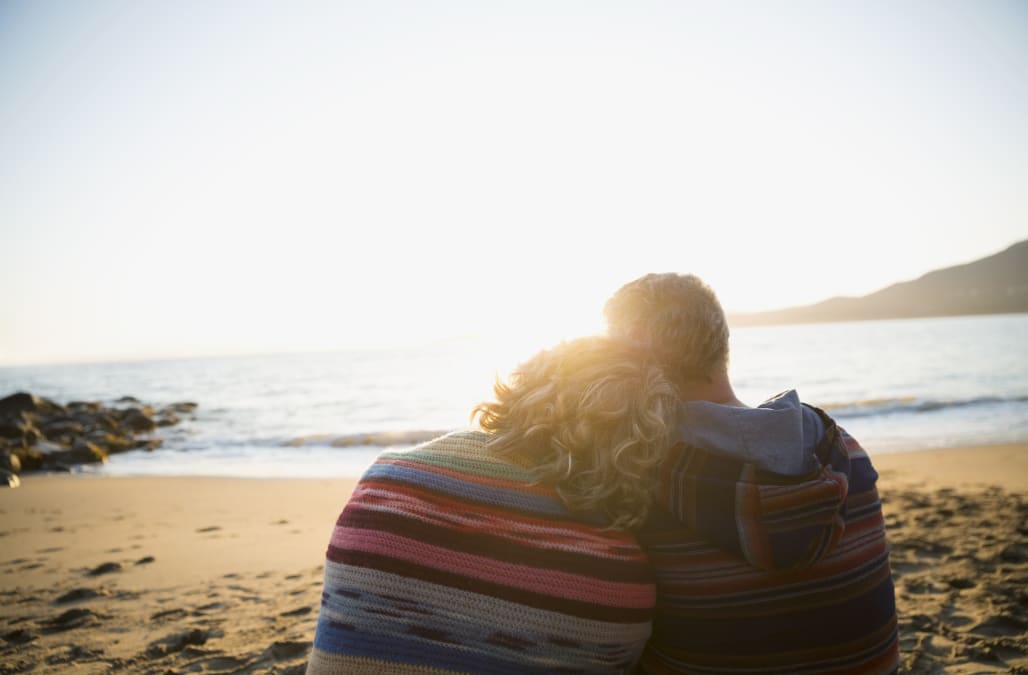 If you’re nearing or in retirement, you might be thinking about relocating to a state that has milder weather, a lower cost of living or better healthcare services. But, before you go, you may want to take into account other factors that could make these popular states for retirees less desirable in your golden years.

GOBankingRates examined the top 10 states where retirees move to and evaluated them based on several factors, including the percentage of the population ages 65 and older, violent and property crime rates, average temperature, cost of senior care and more.

Here are the most popular states to retire:

Costs and amenities can vary greatly from one state to the next, so you should find out which states are truly the best places to retire — they might not be the ones you’d expect.

It’ll Cost You To Live Comfortably In These States

Remember that planning for a comfortable retirement involves more than just adding up the cost of housing and groceries.

“There are two distinct concepts related to the cost of living in retirement: How much money can you generate to fund your retirement, and how much money will you need to fund your retirement?” said Greg Klingler, a certified financial planner and chartered federal benefits consultant at GEBA Wealth Management. “Because the latter is directly attributed to the cost of living in your chosen retirement destination, where you plan to retire is one of the first and most important questions we, from a financial planning perspective, ask to get an accurate representation of your future budget.” 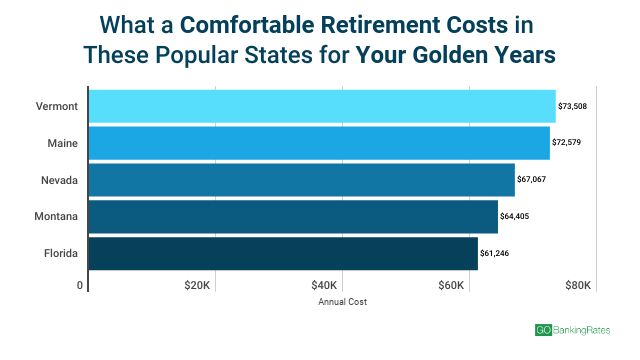 Many Americans consider moving to a place with a cheaper cost of living when they retire, so it may be surprising to learn that states like Florida and South Carolina aren’t as affordable as you may think. In fact, just four of the top 10 states for retirees — Arizona, Idaho, New Mexico and Wyoming — rise above the median on GOBankingRates’ list when it comes to costs for a comfortable retirement. For the best bargain, head to Wyoming and New Mexico, which rank in the top 15 for lowest cost of living among the U.S. states, and avoid Vermont, Maine and Nevada, which fall in the bottom 15.

People require more healthcare as they age, and you’ll eventually need to decide whether nursing homes, assisted living facilities or aging in place is right for you.

If being able to get quality care at home is on your list of must-haves for retirement, you’ll want to avoid relocating to Vermont — which, at $5,148 a month, ranks No. 46 out of the 50 states for the cost of a home health aide — and Maine, which ranks in the bottom 10 with a monthly cost of $4,957. Instead, look to New Mexico and South Carolina, which are the most affordable states in the top 10 when it comes to home healthcare, at an average monthly cost of $3,813 in each state.

Covering care costs for a nursing home can be a significant concern in retirement if you choose to go that route. The average monthly cost of a semiprivate room in a nursing home is $7,441, according to Genworth’s Cost of Care Survey 2018.

Of the 10 states that retirees flock to the most, half of them have steeper costs than the national median for a semiprivate room in a nursing home:

Quality of Life Is a Mixed Bag

Quality of life can be difficult to measure, as it often means different things to different people. “It’s worth noting that not everything has a price tag, and though you can’t assign a financial value to things like living near your grandkids or a body of water, they may carry a great deal of weight, making it clear that all retirement decisions are extremely contextual,” Klingler said.

For GOBankingRates’ list, quality-of-life factors include the percentage of the population ages 65 and older, the average temperature, and violent and property crime rates in the top 10 states for retirees.

At 19.36%, Florida is the state with the highest percentage of residents ages 65 and older, and it also has the warmest average temperature at 71.8 degrees Fahrenheit. However, Florida ranks in the bottom half of the country for safety, with its violent and property crime rates falling in the No. 31 and No. 28 spots, respectively.

Maine and Vermont have the second- and third-highest percentages of residents ages 65 and older, at 18.80% and 17.54%, respectively. Both states are also very safe in general, with Vermont ranking second best in the country in terms of violent and property crime rates, and Maine ranking No. 1 for low violent crime rates and No. 4 for low property crime rates.

On the other hand, Arizona, South Carolina and New Mexico all rank among the 10 worst states for safety. New Mexico ranks dead last for property crime and second worst for violent crime, so choose to retire in this state at your own risk.

Related: The Best Places To Retire In America Are All College Towns

Retirees Are Flocking To These States — but They Shouldn’t

In reality, the 10 most popular states for retirement may not be the best choices. Only one state — Wyoming — can count itself among the 10 least expensive states in America, and there are just three other states that make the top 25 in terms of cheaper costs for a comfortable retirement.

So, where are the actual 10 best places to retire? These are the most retirement-friendly states by cost, according to GOBankingRates:

Beyond costs, you should also weigh overall safety, climate and any other quality-of-life factors that are important to you, which will help you figure out the ideal state to spend your golden years.

Click through to discover where Americans actually want to retire.

More from GO Banking Rates:
3 Reasons Why Retirees Are Flocking To This Desert State
The Ultimate Financial Planning Guide — Do It Like the Pros in 8 Steps
16 Unusual Money Moves That Could Set You Up for Life