Is College Worth It? 42% of Americans Say No 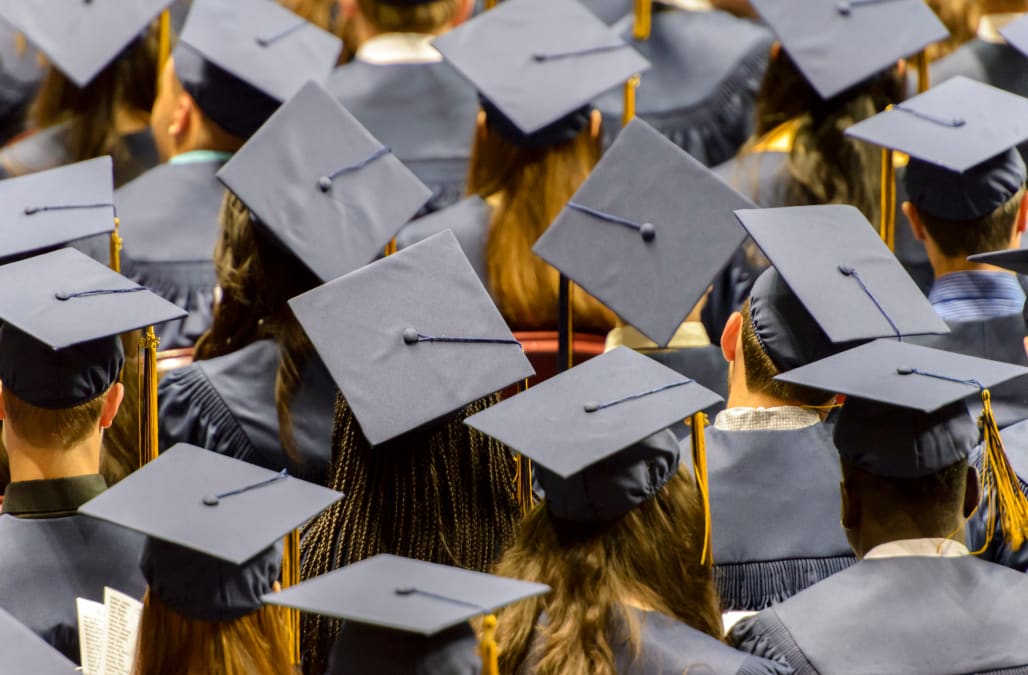 Getting a college education is increasingly viewed as a necessity for chasing down the American dream, but is college worth it when you factor in the mountain of student debt that often comes with it? As more and more Americans begin to come to grips with what it really means to borrow tens of thousands of dollars before you’ve even started your career, the question of just how important a degree really is has started to become more pressing.

That’s why GOBankingRates conducted a survey on whether or not Americans have regrets about going to college. Some 500 Americans with college degrees were polled about how they feel about their decision now, whether or not paying for college was worth the money and what they might do differently if they had a chance to do it all again. Keep reading to learn more about how they answered and what they do and don’t regret about their college decisions.

Find Out: 20 Worst Jobs That Aren’t Worth the Price of a Degree

Is College Worth It? A Large Percentage of Americans Say No

On balance, a little over two in five Americans feel that their time at college just wasn’t worth the debt it created. That might not be so surprising given the size of the student loan debt crisis. The total amount of student loan debt in America clears $1.5 trillion across nearly 45 million people, and borrowers in the class of 2017 are facing an average student loan debt of $28,650. 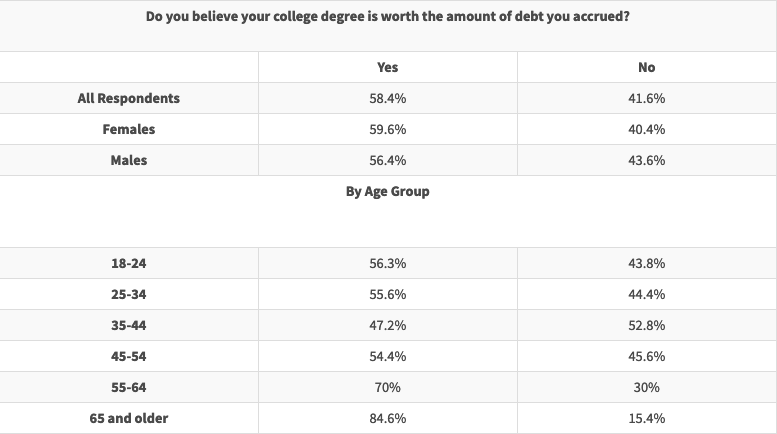 These results, though, take on a different meaning in the context of some of the other responses. Over half of those polled who are currently employed felt that they wouldn’t have been able to get their current job without their degree. And, when asked to rate how valuable their degree was to their career on a scale of one to five with five translating to “very valuable,” 44% answered with a five and another 17.7% answered four.

RELATED: Inside the college campuses of some of America's most elite schools:

See: This State Has the Highest Average Student Loan Debt in the US

So the results appear to indicate that while those surveyed don’t regret college itself, many do regret its costs. The breakdown by age appears to also support that conclusion when you consider the trends in the cost of college. For Americans ages 55 and older — a generation where the cost of college was much, much lower — a much larger majority felt that it was worth any debts incurred during their time matriculating.

But the results are all the more intriguing when placed in the context of just how much debt people said they had due to college costs. 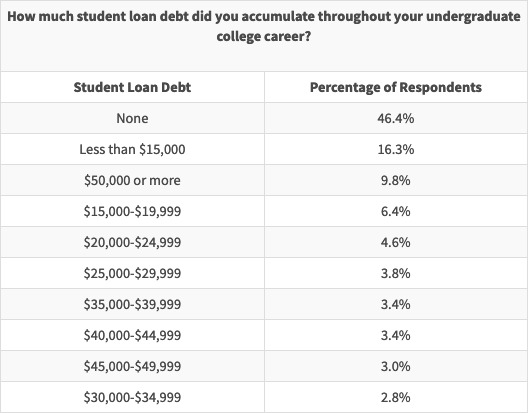 If 46.4% of those polled didn’t have any debt, it could mean that your perspective on how “worth it” college loans are has a lot to do with whether you actually needed them or not. If one assumes that all 46.4% of those polled who graduated without any debt were also among the 58.4% who said college was “worth the amount of debt you accrued,” that would mean that almost 80% of those who said college was “worth the debt” didn’t have any debt to speak of. And, turning that around, it would also mean that of those people who did graduate with debt, three out of four ultimately felt that college wasn’t worth the cost.

Click to Read: The Average Student Loan Debt in Every State

But Most Americans Don’t Regret Going To College

While there’s clearly a large portion of those who needed to take on debt to graduate while also feeling like it hasn’t been worth it, that appears to have more to do with the amount of debt than it does with their experience at college itself. Across the board, the Americans in this survey seem to have a starkly positive perspective about their time in college. 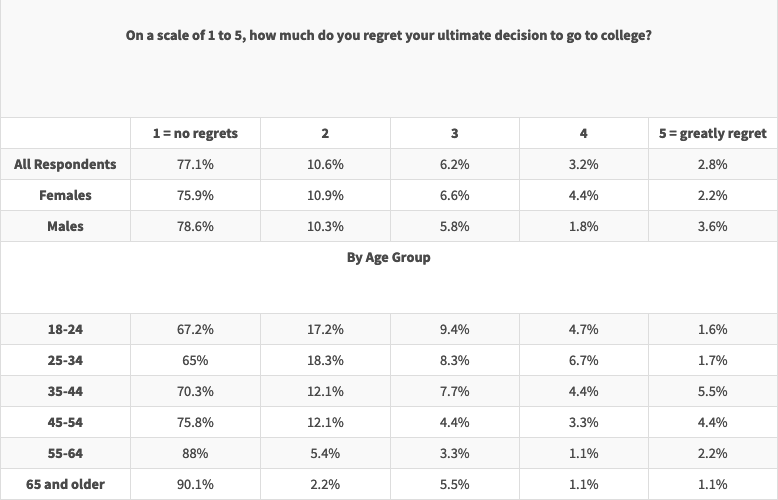 Once again, that could be a reflection of just how dramatically the cost of college has risen, meaning younger generations are making greater sacrifices to make their college degree a reality. However, it could also reflect people at the end of their career who have a long-term perspective on what it’s meant. While a recent graduate working an entry-level job in their early 20s might not think their massive loans were worth it, they might feel differently with the added perspective of just how far they were able to go in their field over time.

Read More: The Stating Salary Out of the 30 Best Colleges

But Some Graduates Wish They Had Chosen a Different Major

Read More: 20 College Majors That Take the Longest to Pay Back

Few things illustrate the fact that college-educated Americans have very strong, positive views about college overall than a question that focused on the specifics of what people regret. 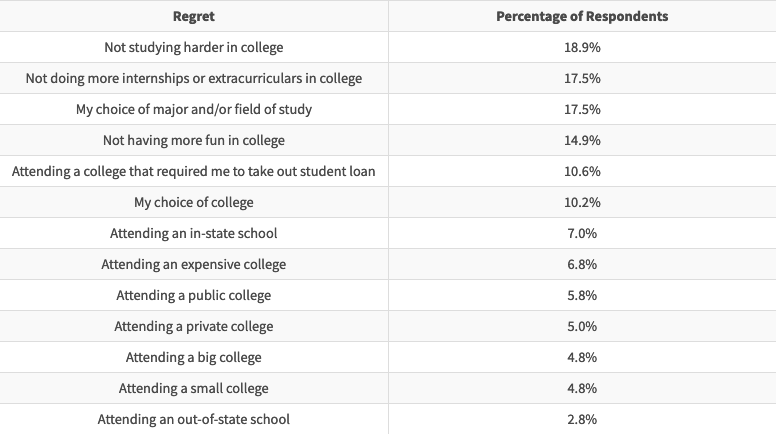 The top answer is the desire to have spent more time hitting the books, followed closely by doing more internships or extracurriculars and then their choice of major. In fact, significantly more people wish they had had more fun during their time attending university than wish they had gone somewhere where tuition costs wouldn’t have necessitated a loan.

More on This: The Average American Needs $22,000 More to Afford College in Their State

Saving for Retirement Is the No. 1 Obstacle for Graduates

Of course, even those people who don’t have significant regrets about college might still be making some hard choices based on their decision to attend. Asking a question about what people are giving up to pay for college yields some interesting results.

Over a third of the Americans in this survey felt that they were delaying saving for retirement because of their student loan debt, demonstrating how student loans can have a serious effect on other areas of your financial life.

The rest of the results also garner some interesting insights when you drill down into the different age and gender groups:

Click to Read: Ideal Salary Needed to Afford College in Your State — Without Loans

How to Tackle Your Financial Goals When You’re in Debt

It’s important to remember that, while the debts incurred by attending college can seem vast, for many people they’re actually a smart investment in a better career. With greater earning power and relatively flexible repayment terms for federal student loans, plenty of people can tackle both saving for retirement as well as paying off student loans.

The important thing to remember is that the faster you pay down your debt, the sooner you’ll have space in your budget to commit more to saving and the sooner you’ll rid yourself of accumulating interest costs. So, carefully building a budget that carves out a large space for paying down student loans is the best first step.

That said, you also don’t want to necessarily pass up the various advantages to retirement saving. If your employer offers a 401k with matching contributions, the value of your savings is multiplied and it’s well worth prioritizing over paying down student loans. Likewise, your contributions to an IRA or Roth IRA are capped at $6,000 a year (as of 2019) for most of your career, so devoting some portion of your income to individual retirement accounts is likely worthwhile even if it means delaying the day when you’re finally debt-free by a few years.

Click through to read about 30 ways you can dig yourself out of debt.

More from Go Banking Rates:
How to Handle These Awkward (Maybe Even Illegal) Interview Questions
Is College Worth It? 42% of Americans Say No
Most Successful Athlete From Every Decade