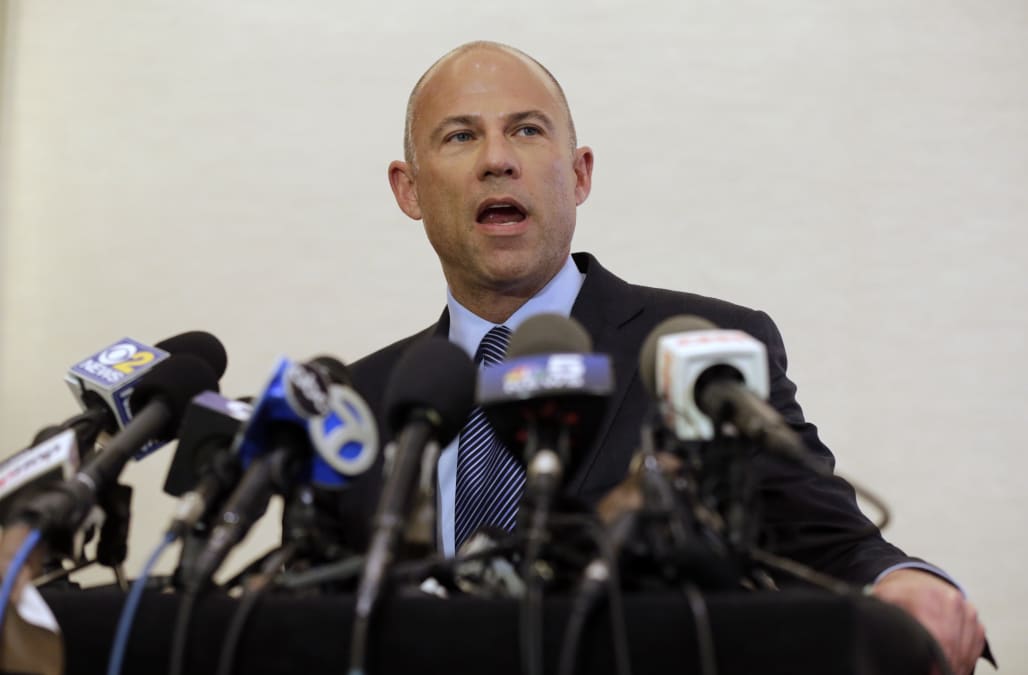 (Editors note: Attention to language in 12th paragraph that may offend some readers)

Avenatti was arrested in New York on Monday and was scheduled to make his initial court appearance in New York, authorities said.Avenatti, who lives in Los Angeles, could not immediately be reached for comment. It was not immediately clear who Avenatti's defense attorney is.

The U.S. attorney for Los Angeles, Nick Hanna, accused Avenatti of "lawless conduct and greed" during a news conference detailing the charges.

Daniels, who recently replaced Avenatti as her attorney, said she was "saddened but not shocked" by news of his arrest.

"I made the decision more than a month ago to terminate Michael's services after discovering that he had dealt with me extremely dishonestly," Daniels said on Twitter.

New York prosecutors said Avenatti and an unnamed co-conspirator met with Nike's attorneys on March 19 and said they had a client, a former amateur athletic coach, who had evidence that Nike employees had paid bribes to top high school players to convince them to play for Nike-sponsored teams.

A former executive at Nike rival Adidas was recently convicted in federal court in Manhattan of taking part in a similar scheme.

Avenatti told Nike that he would go public unless it paid his client $1.5 million and hired him to conduct an internal investigation for between $15 million and $25 million, according to the complaint. Prosecutors in New York said Avenatti also offered to accept a $22.5 million payment to resolve the client's claims and "buy Avenatti's silence."

In a March 20 follow-up call with Nike's lawyers, Avenatti said that if his demands were not met, "I'll go take ten billion dollars off your client's market cap. ... I'm not fucking around," according to the complaint.

Nike did not immediately respond to a request for comment.

The charges were revealed shortly after Avenatti said on Twitter that he would hold a news conference on Tuesday to reveal "a major high school/college basketball scandal" that reached "the highest levels of Nike."

In the embezzlement case in California, prosecutors allege Avenatti misused a client's $1.6 million settlement to pay for his own expenses as well as those for his coffee business, Global Baristas US LLC, which operated stores in California and Washington state.

He was also accused of defrauding The Peoples Bank in Mississippi of $4.1 million in loans by submitting false personal income tax returns for 2011-2013. In reality, prosecutors said, Avenatti did not file tax returns for those years and still owed the Internal Revenue Service more than $850,000 from previous years.

The arrest of a prominent Trump critic came a day after the U.S. attorney general released a summary of Special Counsel Robert Mueller's findings clearing the president's campaign of conspiring with Russia in the 2016 U.S. election.

Trump's eldest son, Donald Trump Jr., reacted with glee to the news on Twitter, bashing out a series of tweets, including: "#MAGA - Michael Avenatti Getting Arrested!!!" (Reporting by Joseph Ax and Brendan Pierson in New York; additional reporting by Daniel Trotta and Jonathan Stempel in New York; editing by Scott Malone, Susan Thomas and Leslie Adler)