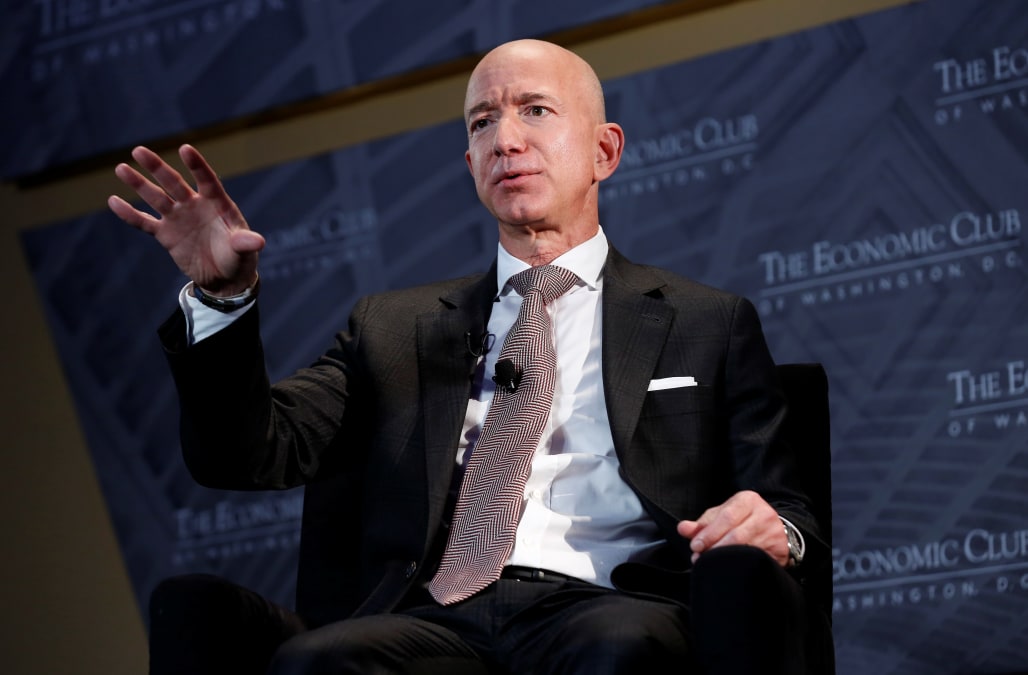 The National Enquirer's parent company said Friday that it will investigate Amazon CEO Jeff Bezos' claims that he was extorted and blackmailed after he launched a probe into how the National Enquirer obtained private text messages and photos of him and his girlfriend.

American Media Inc., which owns the Enquirer, said it "acted lawfully in the reporting of the story of Mr. Bezos," but would investigate his allegations.

"At the time of the recent allegations made by Mr. Bezos, it was in good faith negotiations to resolve all matters with him," the statement read. "Nonetheless, in light of the nature of the allegations published by Mr. Bezos, the Board has convened and determined that it should promptly and thoroughly investigate the claims."

Twitter reacts to Jeff Bezos divorce announcement
Motion to call Jeff Bezos divorcing his wife “Alexit.”
Jeff Bezos is divorcing wife MacKenzie after 25 years of marriage. According to the pre-nup her free Amazon Prime m… https://t.co/METQhvD6sy
Top Investment Idea for 2019: Go long the law firm representing Mackenzie Bezos
Jeff Bezos is getting divorced after realizing that marriage counts as a union.
Daaaamn it’s crazy that Jeff Bezos left his wife for Siri.
Bezos has Prime so he'll have a new wife delivered to him for free within 2 days.
Hoping that a clerical error means both Jeff Bezos and his wife lose everything in the divorce
The real question in the Bezos divorce is who gets the Seattle City Council in the divorce? Will Jeff at least get visitation rights?
Jeff Bezos' divorce-dad phase is going to get every single one of us killed
Jeff Bezos is now gonna buy every Corvette on earth
TODAY Jeff Bezos and his wife MacKenzie are set to divorce after a long and intense disagreement over what they wan… https://t.co/cLnpiKBdfZ
Jeff Bezos has announced his search for Wife2. Prospective candidates are encouraged to submit their requests for p… https://t.co/3H1NWwPpHp
Wondering if Jeff Bezos will get a divorce lawyer from Amazon.
Jeff Bezos' net worth just crashed by 50%
lol imagine swiping through Tinder and Jeff Bezos comes up
I wish I was Jeff Bezos wife.
Jeff Bezos wife is leaving him after finally working out how to unsubscribe from the 30 day free trial of him she signed up to 25 years ago.
Up Next

American Media — which is comprised of four board members, including CEO David Pecker — said they will take "appropriate action", if necessary, following the investigation.

Bezos has not yet responded to American Media, but lashed out at Pecker on Thursday in a post on blogging website Medium.

In it, Bezos alleged that the company threatened to post intimate text messages, and accompany photos, of him with his girlfriend, Lauren Sanchez, if he did not stop the Bezos-owned Washington Post from reporting about political motivations behind the Enquirer's initial reports that he was having an alleged affair.

"We were approached, verbally at first, with an offer. They said they had more of my text messages and photos that they would publish if we didn’t stop our investigation," Bezos, who announced his divorce on Jan. 9, said.

"If in my position I can’t stand up to this kind of extortion, how many people can?" Bezos wrote.

In a Feb. 5 email believed to be from Howard and sent to Martin Singer, a lawyer for an investigator Bezos hired, it details 10 photos AMI claimed to have of the CEO and Sanchez. An email supposedly sent by Fine detailed "proposed terms" for a deal to keep the photos from going public.

“Of course I don’t want personal photos published, but I also won’t participate in their well-known practice of blackmail, political favors, political attacks, and corruption,” Bezos wrote. “I prefer to stand up, roll this log over, and see what crawls out.”

The tabloid and Pecker have come under increased scrutiny in recent years for their close ties to President Donald Trump as well as broader allegations that they acted on the president's behalf against his perceived enemies.