Domino's has a bold stunt for the Super Bowl 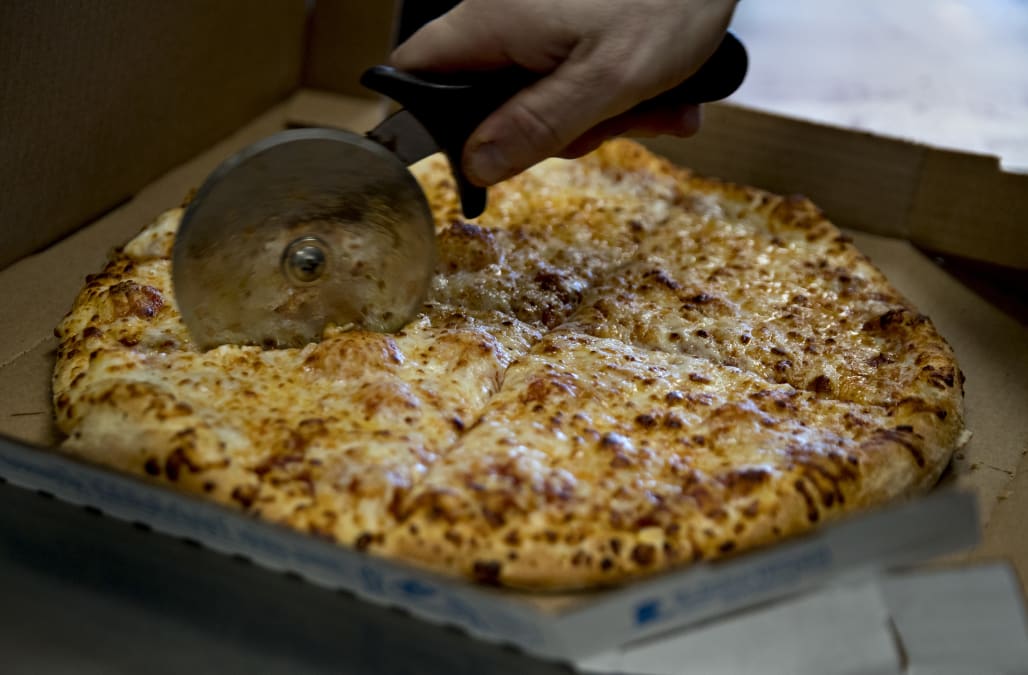 Domino's (NYSE:DPZ) has made staging bold stunts a big part of its business model. These have ranged from the silly -- using reindeer to deliver pizza and offering pizza insurance for people who drop their pies -- to mildly more serious efforts like actually paving over potholes for a smoother delivery route and making it so customers can order via social media or text message.

Now the pizza chain has another bold play just in time for the biggest pizza day of the year. The company plans to kick off a new promotion on Saturday, Feb. 2, where it offers customers points in its Piece of the Pie Rewards program for pizzas they purchase from any rival (or make themselves).

RELATED: Most searched for Super Bowl foods in the US, according to Google

10 PHOTOS
Most searched for Super Bowl foods in the US, according to Google
See Gallery

Most searched for Super Bowl foods in the US, according to Google

Get the recipe for these Saucy Beer BBQ Meaballs here.

Get the recipe for these creamy buffalo wings by The Daily Meal here.

Get the recipe for these Jalapeño Poppers by Philadelphia Cream Cheese here.

Make these individual cups of dip or try a new spin by The Cookie Rookie here.

Get the recipe for this spinach and artichoke dip bread from Yahoo Now here.

5. Pigs in a blanket

Get the recipe for these perfect pigs in a blanket by The Daily Meal here.

Get the recipe for this German Chocolate Cake by Kitchen Daily Editors here.

Get the recipe for this turkey chili in a cornbread bowl here.

Get the recipe for these Black-and-White Cupcakes by Food & Wine here.

Get the recipe for this Buffalo Chicken Dip by Philadelphia Cream Cheese here.

How does it work?

Consumers have to download the Domino's app, register for the Piece of the Pie Rewards program, and then they can use a new artificial intelligence-powered tool to scan their pizza. Once the app identifies the pizza, the customers earns 10 points. It takes 60 points to earn a free medium two-topping pizza from the chain.

"Instead of advertising during Sunday's game, we decided to invest in a breakthrough program that rewards everyone who loves pizza as much as we do," said Domino's Chief Brand Officer Art D'Elia in a press release  "We know everyone is asking themselves, 'Did Domino's just say they will award points for eating ANY pizza? Even from a competitor?' You read that right; oh yes we did!"

The offer begins Feb. 2 and will run for 12 weeks. Domino's will kick off the promotion with an ad featuring its CEO, Ritch Allison, in a non-Domino's pizza restaurant. Those ads will not air during the Super Bowl but will premiere "just in time for the big game," according to the press release.

The commercial features a nearly silent film of the iconic Pop Artist eating a Whopper.

It’s the first Super Bowl commercial 37 years in the making. The original 4-minute clip was created by Swedish director Jorgen Leth in 1982.

The actors are reprising their iconic roles for a good cause.

The actor pokes fun at his 'nuts' public image for a Super Bowl ad alongside the one and only, A Rod.

The tennis pro is teaming up with the dating app for it's first-ever Super Bowl commercial which highlights #InHerCourt.

Chance the Rapper and the Backstreet Boys for Doritos

To celebrate the launch of Flamin' Hot Nacho flavor, Doritos is teaming up the musicians for a hilarious and unexpected commercial.

The "Ozark" star is taking on the role of an elevator operator to help take the pain out of car shopping!

Cardi B, Steve Carell and Lil Jon for Pepsi

The three mega stars are teaming up with Pepsi for their always iconic Super Bowl commercial.

The iconic actor is one of many familiar faces that appears in Amazon's 90-second spot, which sheds light on some "top-secret" Amazon Beta Testing Program teasers released last week.

The "Buffy the Vampire Slayer" alum has aresume of thriller and horror roles, which makes her the perfect choice for Olay’s Super Bowl ad entitled ‘Killer Skin.’

The "Big Little Lies" star is reconnecting with the great outdoors through the power of the delicious organic beer.

The Grammy-winner singer is collaborating with the sparkling water company for a hilarious play on his last name.

The "Dexter" actor will star as the lead in "Skittles Commercial: The Broadway Musical" on Sunday afternoon instead of the brand running a 30-second spot during the big game.

The football and baseball legend is teaming up with the mobile company to bring back the Sprint Robots.

"We knew that filming this commercial in a pizzeria that was clearly not Domino's would really demonstrate our commitment to awarding points for all pizza," said Kate Trumbull, Domino's vice president of advertising in the press release. "We chose a place that was special to our CEO when he lived in Atlanta -- Antico Pizza, an acclaimed family-owned favorite that puts just as much love into their pizza as we do."

Is this a good idea?

Hype aside, this is a smart play by Domino's. The chain sells nearly 2 million pizzas (and 4 million chicken wings) just on Super Bowl Sunday. This offer allows the chain to benefit from pizza sold by its rivals by getting more consumers to download its app and register for its rewards program.

Once a consumer has downloaded the app and registered for the reward program, they have effectively decided to become Domino's customers at some point. Even if they hold off until earning a free pizza, they will eventually buy from Domino's, which gives the chain a chance to win over new customers.

This is a publicity stunt but it's a very smart one. Domino's will not only get a lot of attention, it should add registered users who eventually at least try its product.

10 stocks we like better than Domino's Pizza
When investing geniuses David and Tom Gardner have a stock tip, it can pay to listen. After all, the newsletter they have run for over a decade, Motley Fool Stock Advisor, has quadrupled the market.*

David and Tom just revealed what they believe are the ten best stocks for investors to buy right now… and Domino's Pizza wasn't one of them! That's right -- they think these 10 stocks are even better buys.