Here's the budget breakdown of a 34-year-old who makes $150,000 and is excellent with money 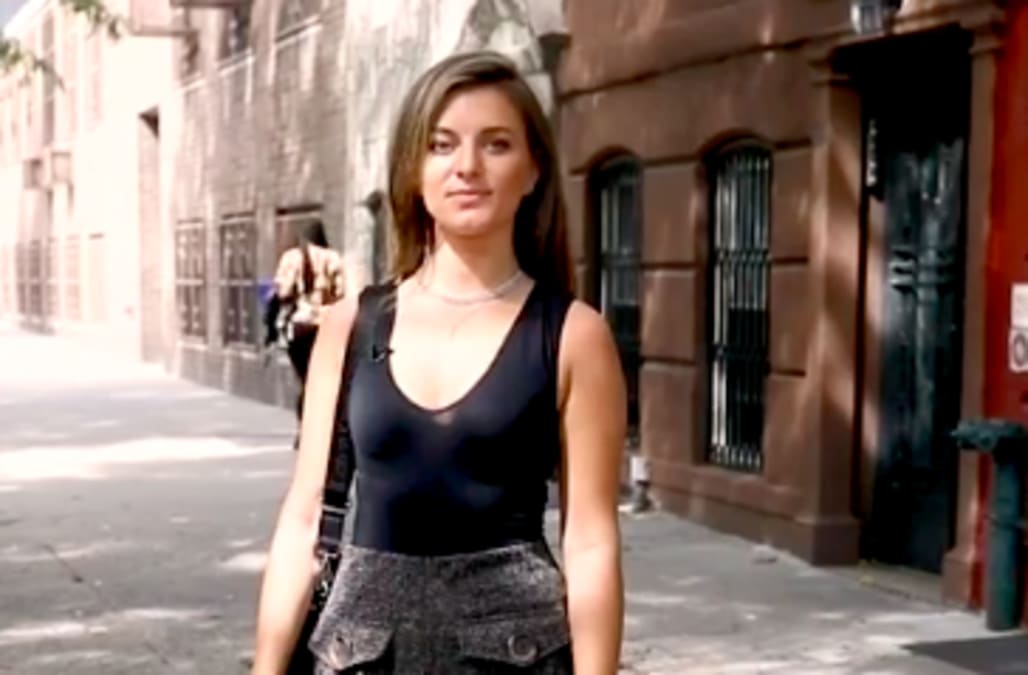 Living in New York City, the 34-year-old entrepreneur has taken on a variety of projects throughout the years, including working at corporate jobs, building a branding agency of her own and helping to run a nonprofit.

Growing up as an immigrant in a shared Brooklyn apartment, Ilieva learned to hustle to achieve her goals. Here's how she started with nothing and now earns six figures.

RELATED: 25 highest-paying jobs in America, according to Glassdoor

What Ilieva makes each year varies but, in a typical year she brings in between $80,000 and $150,000, primarily as a brand consultant. She runs her own marketing agency, DLA, An Agency, which specializes in brand and business development for food and beverage companies. Ilieva started the business with the contacts she made during her time working for Patron right after college and built it out from there.

Although Ilieva has held numerous corporate jobs since she graduated from De Anza College in Cupertino, California, she has developed extracurricular projects as well. "I've always been building my network on the side because you never know what can happen nowadays," she says. "It's always good to have something to fall back on."

She started her agency eight years ago and, after a layoff in 2016, decided to pursue the business full-time.

Hard work is in her nature. She was born in what used to be Yugoslavia and moved to the U.S. with her mother's family when she was four. Once there, she and her mother lived in a one-bedroom apartment in Brooklyn with two other families' worth of relatives for over a decade. "My experience with money was seeing my family hustle," she says. "They were locksmiths and everyone was pooling money."

That mindset still affects how she looks at her finances today. "Every dollar I spend, I think of how I can make three dollars to cover it," she says. "I buy a purse for $200 and I'm like, 'Where am I going to make $500 tomorrow?'"

It's one of the things she loves about running her own business. "That's the beauty of freelance, where you could reach out to people and just come up with a concept or an idea for a business," she says.

However, being an entrepreneur poses organizational and financial challenges. "I'm putting aside money to pay for taxes every year. I'm keeping receipts," she says. "Every dollar counts when you have your own agency and work for yourself."

Ilieva has also earned a substantial amount from cryptocurrency over the past year. At her brother's suggestion, she invested in bitcoin early on. When the cryptocurrency began to surge in late 2017, "He called me and said, 'Get out!'" Ilieva recalls. "He said, 'You will never see a return on anything like this in your life again.'" She cashed out when the coin hit $19,000.

Ilieva still dabbles in other alt-coins but sees cryptocurrency more as a hobby than a long-term investment plan. Unlike the stock market, which is only open certain times, cryptocurrency never stops, so Ilieva is able to trade whenever she has free time. "The beauty of crypto is that it's 24/7," she says.

In her spare time, Ilieva runs the New York chapter of #HashtagLunchbag, a nonprofit that makes and delivers meals to the homeless. The organization started in Los Angeles in 2012 when the founder, one of Ilieva's friends, decided to spend his birthday handing out homemade sandwiches on Skid Row.

Ilieva launched the New York chapter herself in 2014 shortly after moving back to the city. "We started with just making 100 [lunches], now we're making almost a thousand every month," she says.

In addition to volunteer coordination and sponsorship procurement, Ilieva produces the organization's monthly events. She ensures that all of the groceries are provided and coordinates day-of logistics so that volunteers are able to assemble and deliver the lunches on the last Sunday of each month.

Although the time she puts into the nonprofit far outweighs her financial contributions, Ilieva also ends up giving between $3,000 and $4,000 to Hashtag each year. The expense is more than worth it to her: "It's just nice to be able to do something that can put a smile on someone's face that we take for granted," she says.

Here's a breakdown of everything Ilieva spends in a typical month. 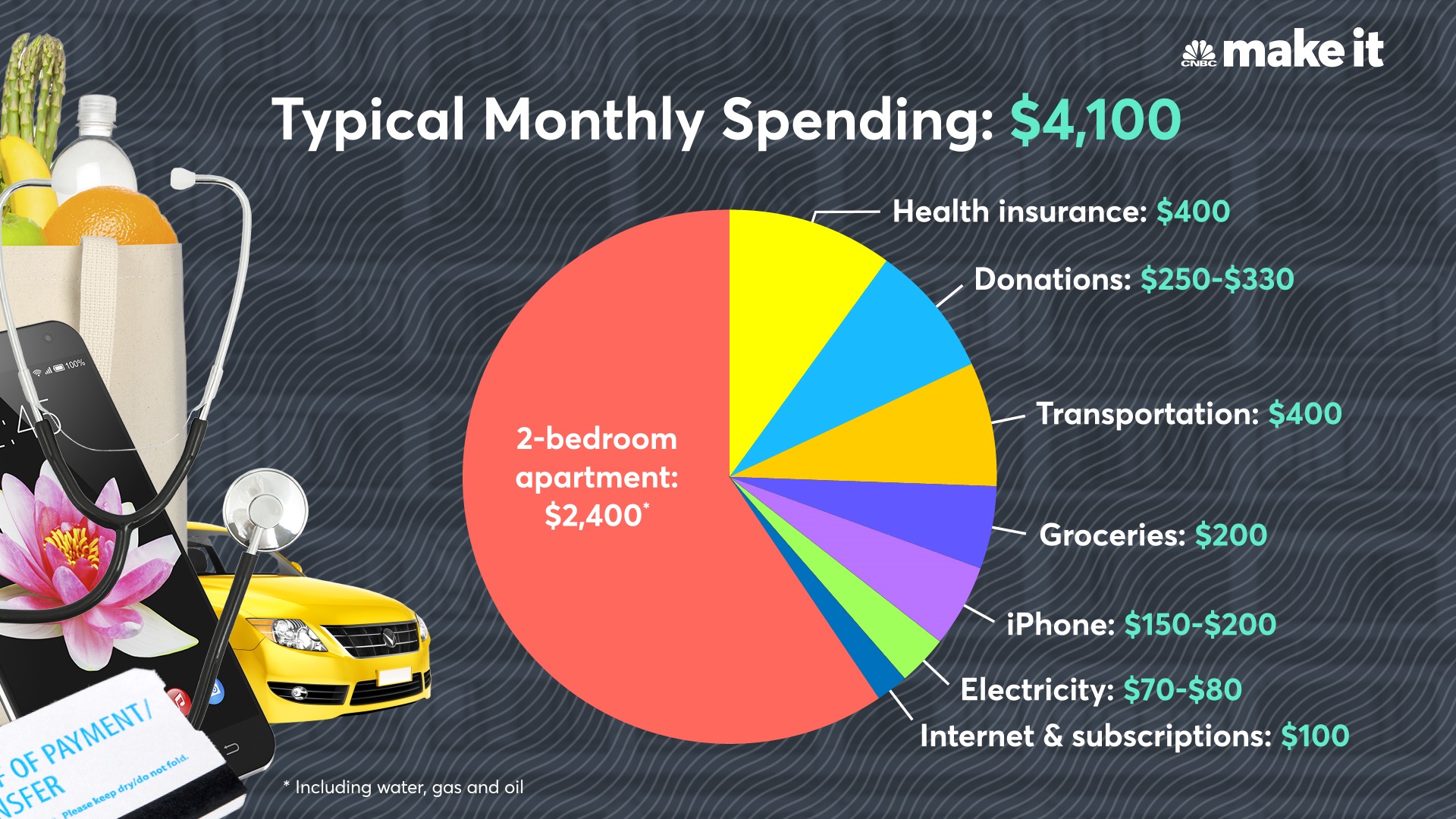 Ilieva's $2,400 rent covers her two-bedroom apartment in upper Manhattan, where she lives alone, as well as her water, gas and oil.

She previously lived in New York's trendy SoHo neighborhood and she paid $2,700 for a studio. Moving uptown, where she's able to get far more space for her money, was worth it, she says. Her rent decreased, and she's able to save on other expenses as well: "Downtown, I was paying $4.99 for an avocado and up here you have an avocado for $1.99. My food expenses have definitely gone down significantly since I moved uptown."

Ilieva pays $400 for the cheapest insurance that's available to her. It's still a considerable expense, but "you just have to have health insurance, especially when you're in your mid-30s," she says.

Ilieva focuses on cooking as many meals as possible at home and spends between $80 and $100 on groceries every two weeks.

"I love to cook. I find that that's a great way to save money," she says. And even though she receives a number of free dinners from clients and brand partnerships, "my goal is to eat at home at least breakfast every single day."

Ilieva typically purchases three unlimited weekly Metrocards for $32 each per month and spends an additional $300 or so on cabs, which she takes everywhere from client meetings to scouting venues for events. Because the majority of her transportation needs are for work, she's able to expense most of the costs.

Ilieva receives a free gym membership through one of her brand partnerships. Her other costs, such as meals out with friends and donations to charities and Kickstarter campaigns, vary.

Ilieva aims to save between 10 and 15 percent of what she brings in each month, although it can fluctuate.

Annually, she budgets between $10,000 and $15,000 of her savings for travel. Every year, she aims to visit her mom in California, go on a summer vacation and take a trip for her birthday, which is in October. "I believe in spending money on experiences, not materialistic things," she says.

Although it's a major expense, travel is one of Ilieva's top priorities, so she makes room for it in her budget. "I think you have to see the world," she says. "You have to see different cultures just to better understand yourself and people around you."

Ilieva opened her first retirement savings plan, a 401(k), in college, while she was working at a Safeway. "I actually worked at Safeway for five years when they were union, so that's all been building since," she explains.

She rolled the money over into a Roth IRA when she moved on. "Every time I have taken a corporate job, whether it's been for a little bit or on my own, I'm always putting into that fund," she says. She also has a small amount growing in another 401(k) account from a previous job.

Ilieva puts around 5 percent of her monthly savings toward retirement, she says, but because her income can be unpredictable, her contributions vary: "If I do an event and bring in $20,000 from it, obviously I'll put a portion of that aside. Then there's months where I'm not putting anything aside."

What the experts say

CNBC Make It asked Pamela Capalad, a certified financial planner and founder of Brunch & Budget, to comment on where Ilieva is doing well and how she could improve. Overall, Capalad thinks Ilieva is making excellent choices. Here's why.

She's saving for her priorities

It's smart for Ilieva to make travel a priority in her budget, Capalad says. "I love the fact that she's acknowledging that she's going to travel multiple times per year," she adds. "Sometimes we let things surprise us, like the holidays every year or when our taxes are due, or that big trip that we always theoretically know we're going to take. It's really great that she's setting aside money for it and being intentional about it."

Ilieva does a stellar job of putting away money in general. "Regardless of how much money she makes every month, she still is saving no matter what," Capalad says. "I think it's great that she's always making room for savings and that she's regularly contributing toward retirement."

Health insurance is worth the expense

Ilieva's insurance might feel costly at times, but it's necessary, in Capalad's opinion. The coverage is "there for those catastrophic moments," she says. "If you were to get injured, if something really terrible were to happen, if you were to fall ill, health insurance is going to be there so that you're not paying $20,000, $30,000 medical bills."

Capalad also notes that freelancers and entrepreneurs should find out if they qualify for Medicaid or other programs and subsidies that could help bring their health care costs down.

She should look into disability insurance

Self-employed freelancers and entrepreneurs shouldn't stop at health insurance. Capalad recommends Ilieva look into disability insurance as well, if she doesn't have it already. "If you are injured or ill and cannot do your job, after a certain amount of time disability insurance starts paying you up to 60 percent of what you were making," she explains.

While coverage will vary policy to policy, it's a good to have a backup plan, especially if you work for yourself. Because disability insurance is often provided by employers, for freelancers it's "a hole that we don't really think about."

A SEP IRA could help her save on taxes

Ilieva's already ahead of the game by making regular contributions to her retirement fund, but she could be saving more on taxes by contributing to a SEP IRA, or simplified employee pension, instead, Capalad says. A SEP IRA allows self-employed individuals to make tax-deductible contributions and not have to pay taxes until they retire.

These accounts offer higher contribution limits than traditional or Roth IRAs, which would be key for a high-earner like Ilieva. As of 2017, you can contribute up to 25 percent of your income after deductions, or as much as $54,000.

She's smart to be careful with crypto

Although Ilieva's cryptocurrency investments have paid off, she's smart not to make them her primary focus since digital currency is "still so volatile and still such a question mark," Capalad says. It's difficult for financial planners to give prudent advice about crypto, since there's so little precedent for it in history, she adds, but better safe than sorry.

The bottom line for anyone investing in cryptocurrency, Capalad says, is that you should "make sure this is money that you can afford to lose."

It's great that she gives back

"When we think about charitable donations and charitable giving, it's always a dollar amount that seeps into our heads," she says. "I really like that she also is contributing her time and making time for it. There are other ways to give back that are more than just writing a check and I love that she does that too."