Ciara on balancing a career comeback with motherhood: 'I felt like superwoman even more' 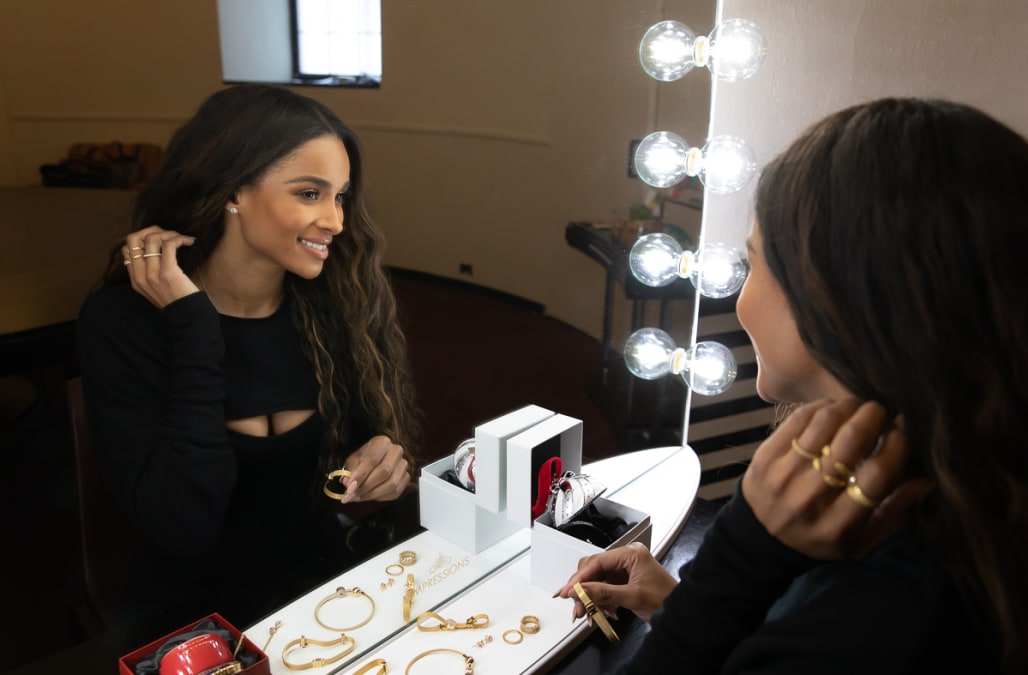 The holiday season is rapidly approaching and before we know it, we’ll be walking on snow-covered streets with inescapable yet familiar jingles following our every step, conjuring up memories of all things love, hope and magic.

For New Yorkers and tourists alike, this meansthe return of one of the most magical Christmas traditions of all — The Christmas Spectacular Starring the Radio City Rockettes.

Known for their seemingly-impossibly high kicks and graceful movements, part of the fun of watching the The Christmas Spectacular is getting to see the glamorous costumes, ornate set decor the enviable bling donned by the Rockettes themselves!

For the second year in a row, The Christmas Spectacular Starring the Radio City Rockettes will feature jewelry exclusively by PANDORA, a company who knows a thing or two about glitz, glamour and making a statement on the dance scene.

14 PHOTOS
The Rockettes through the years
See Gallery

In order to kick off PANDORA’s exclusive Holiday Charm and Holiday Charm + Ornament Gift Set for this year (designed in collaboration with the Rockettes), the company teamed up with longstanding partner, comeback queen and music superstar Ciara:

“I’ve been working with PANDORA for a while now … it’s been a fun ride. In this case, it’s really fun because we’re here together at Radio City Music Hall and we’re celebrating the limited edition of the [PANDORA] Holiday Charm and Ornament and it’s inspired by the Rockettes … I thought this would be a really fun time to get together because dance is a really big part of what I do and of course I love good jewelry, and PANDORA has some of the best jewelry."

And though jewelry is always a solid gift option for so many during the holiday season, there’s one person on Ciara’s list who proves to be a bit more difficult to shop for:

“My husband! His birthday is coming up so I gotta get there first, but you know I always figure it out. It just takes a little time to think about what it is. This one thing I wanted to get him, he unfortunately just got for himself so I’ve got some more thinking to do, but I’m excited.”

But for both Ciara and [her husband] Russell Wilson, the holiday season is about so much more than just gift-giving and holiday-themed festivities — it’s about the love and bonding time that the holidays bring that get them most excited each year:

“I’m pretty simple … it’s really just the cool moment of being able to spend time with family and have dinner. It’s almost like repeating the Thanksgiving meal all over again which I love. I’m from the south and we love to eat and there’s nothing like having good turkey and stuffing all over again! Keeping that food tradition alive is always cool, and we love to do karaoke, we love to dance. [My son] Future the other day was like ‘Mommy, can we have a dance party?’ So we have dance parties with the family and we play games and we just have a good time — it’s full of a lot of love."

23 PHOTOS
Ciara out and about
See Gallery

Ciara, who's hit the scene hard this year with her summer release of single 'Level Up' followed by 'Dose', is an anomaly in an industry that is ever-changing and competitive in its landscape.

Ciara has re-emerged as a better version of the Ciara that she’s always been, no dramatic change or massive reinvention -- just her authentic self, upgraded.

‘Level Up’ debuted at Number 10 on the U.S. Digital Songs chart and quickly became a viral sensation with the ‘Level Up’ dance challenge taking over the internet this summer.

The song and its message are reminiscent of Ciara’s own evolution and the way in which she lives her life and approaches her career — there’s always room to grow so long as you’re willing to be better than yourself.

The irony is that Ciara’s admirable dedication and methods of self-motivation in both her career and personal life comes as a result of watching fans and loved ones find a source of inspiration and happiness through the work that she does — they motivate her to motivate herself so that she can be the best version of herself for them:

“I’ve always been that kind of person, always trying to figure out how to get better and better. But I will say that at this particular season of my life, I felt more drive to ‘Level Up’ .. I just want to make sure I’m always getting better, doing better — getting what I deserve out of life. I think that’s really important, being able to use my journey to inspire others, to make sure they’re getting the best out of life and doing what makes them happy. And making sure that they are happy and that they are living their best life — that’s been a really important part of my message and my story.

For this project, I want to inspire the world and I want to inject love and make the world dance. It’s been incredible to see that come to life and to see how the whole world is literally dancing and ‘Leveling Up’ and doing all these cool viral videos. You see cute videos like a principal dancing in the middle of the gym with her kids and I know how much that means to the students that someone cares that much and is that engaged with them to encourage them to do better and to ‘Level Up,’ so when you see those moments, it’s awesome. Dance is so powerful — it has the power to bring the world together. It’s another universal language the connects us all. So when you see that happening, it makes me smile and it inspires me, it motivates me even more — I’m more motivated because of it.”

For Ciara, the love and support of her family has been (and continues to be) the driving force that inspired her latest project and career pivot out of her musical hiatus and back into the public eye:

“This is probably the most excited I’ve been in a while with putting out music. It felt really good. I think for me, it was also cool that I created most of my project carrying my daughter and now she’s out and she’s dancing to the music that I created while carrying her, so it’s pretty cool. But it’s been an incredible ride and my family has been my rock. They’ve been a big part of the inspiration behind what I do and they motivate me even more. I felt more empowered than ever after I had my daughter and having two kids, I really felt like ‘Let’s get it!’ I felt like superwoman even more. I just have more motivation behind all that I do because of them. My family, my husband (he’s another one of my babies as well) — it’s been an incredible time fo all of us, I’d like to say.”

Because at the end of the day, being a mother and a wife is just as much a part of who Ciara is as the songs she sings and the performances she puts on — she’s trying to find that balance between career, mother and woman just as so many of us are:

“It is really a balancing act because when I go home, the identity of who I’m known to the world as is completely removed. That’s very humbling and I love it that way. I feel like my family gives me balance, they keep me grounded through it all. I like when I get home that I can just truly be me. It’s not about all the glitz and the glam — it’s about those bonding moments and spending that time reading books and bath-time and just laughing. Just really having a good time — it’s like the important vitamin I need to survive in life. It’s one thing to have all the good, glamorous, fun stuff happening but it puts the cherry on top when I have a good time at home with my family and I have that as my foundation.”

The best way for Ciara to balance that time between work and play with a busy schedule and a never-ending list of things to get done? Literally write it down and schedule it out:

“It’s really also about schedule. My schedule is crazy-town but it’s literally mapped out … it will say on my schedule ‘Drop the kids off at school’ (Sienna just started school so her and her brother go to the same school which is really cool) and it will be like ‘Wake up, get them ready, drop them off to school’ and after that I’ll go and do a conference call and after that I may have rehearsals and then it’s time to pick them up — I put that on my schedule … i just really map out my world as much as I can to make sure I’m also carving out time for family time.”

“This is a really exciting time — I have a couple of really cool announcements coming out soon that I can’t wait for my fans to hear about, so the holidays will be really fun and jam-packed. I’m looking forward to all that is to come from my project and it’s been, again, an incredible ride to see the world go on this journey with me and to see the whole world dance. The way my fans have been engaging with me and the viral videos — it’s been really cool and it’s a blessing and I just want to keep enjoying this ride.”