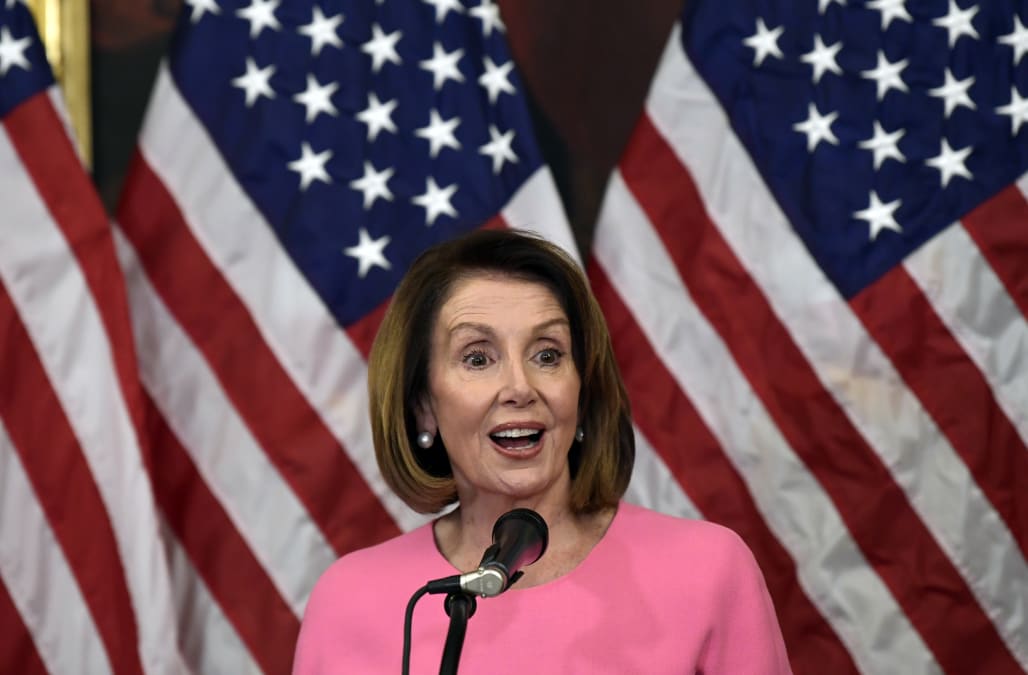 On Tuesday night, Nov. 6, Democrats played offense in their political battle to control Congress. Although they didn’t achieve their midterm election goal of Senate control, they claimed another victory when they seized a comfortable majority in the House of Representatives by controlling 222 seats to the Republicans’ 199 seats, with more races still to be decided.

Now that Democrats hold the majority, Rep. Nancy Pelosi is likely to reassume the role of speaker of the House of Representatives, ousting Rep. Paul Ryan in the process. This election saw many firsts, like the first Native American woman and the first Muslim woman elected to Congress. GOBankingRates explored the life and fortune of Nancy Pelosi, the first woman speaker of the House when she served from 2007 to 2011 in this high-paying position.

Find Out: Is Your Representative One of the 10 Poorest People in Congress?

RELATED: Take a look at the U.S. representatives with the lowest net worths in Congress:

US Representatives with the lowest net worths in Congress - 2018

Senator Tim Scott has been serving South Carolina since 2013. The Republican lawmaker previously represented the state in the House from 2011 to 2013, and he’s up for re-election in 2022.

Scott’s net worth was calculated based on assets that can help his net worth estimated at $200,000 and liabilities of $800,000. A current breakdown of his financial situation wasn’t available, but his 2015 financial disclosure report posted on OpenSecrets.org listed assets including two residential rental properties, insurance policies and annuities and several mutual funds. At the time, his liabilities stemmed primarily from three mortgages.

Engel’s net worth is based on assets estimated at $100,000 and liabilities of approximately $700,000. His assets include money in several bank accounts and multiple government bonds, according to his 2016 financial disclosure report posted on OpenSecrets.org. Two mortgages were listed as liabilities, along with $10,000 to $15,000 in credit card debt and a line of credit worth $100,001 to $250,000.

Representative Mike D. Rogers has been serving Alabama’s third district since 2003. The Republican is up for re-election in 2018, which could cause him to make influential political news headlinesthis year.

Rogers’ net worth is based on approximately $900,000 in assets and roughly $1.5 million in liabilities. A breakdown of his current financial situation isn’t available, but his 2015 financial disclosure report obtained by OpenSecrets.org revealed his assets are largely from checking, savings and retirement accounts. Two mortgages were listed as his sole liabilities.

Representative Dennis A. Ross served Florida’s 12th district from 2011 to 2013 and has served the state’s 15th district since 2013. The Republican is up for re-election in 2018, so expect to hear his name in election news coverage.

Despite representing a state without a lot of debt compared to others, Ross’ net worth is based on an estimated $1.5 million in assets and liabilities totaling approximately $2.1 million. His assets include a rental property and a capital gains loan worth $500,000 to $1 million, according to his 2016 financial disclosure report posted on OpenSecrets.org. Liabilities listed include two mortgages and four additional loans for a motor home, travel trailer, truck and tractor.

(US House of Representatives / Wikimedia Commons)

Democrat Christopher Murphy has served as a Connecticut senator since 2013. Before that, he represented the state’s 5th district in the House from 2007 to 2013. He’s up for re-election in 2018.

Murphy’s net worth is based on assets estimated at $100,000 and liabilities of $800,000. A breakdown of his current financial situation isn’t available, but his 2014 financial disclosure report obtained by OpenSecrets.org revealed his assets were held in bank accounts, mutual funds and retirement accounts. His liabilities consisted of a mortgage and two student loans, valued at $15,001 to $50,000 each.

Also See: The Most Expensive Races in the 2018 Elections

Representative Emanuel Cleaver has been serving Missouri’s 5th district since 2005. The Democrat is up for re-election in 2018.

Cleaver’s net worth is based on an estimated $500,000 in assets and $1.3 million in liabilities. His assets include a mix of bonds, mutual funds, insurance policies and annuities, according to his 2016 financial disclosure report posted on OpenSecrets.org. Liabilities listed consist of a mortgage, student loan, installment loan and a personal liability with a minimum value of $1 million.

Republican Todd Young has been an Indiana senator since 2017. He previously served the state’s 9th district in the House from 2011 to 2017. Young will be up for re-election in 2022.

His net worth includes an estimated $100,000 in assets and $900,000 in liabilities. His assets consist of college savings plans — he has four children — a retirement fund and bank accounts, according to his 2015 financial disclosure report posted on OpenSecrets.org. Liabilities include a mortgage and debt on two credit cards totaling $15,001 to $50,000 each.

Representative Debbie Wasserman Schultz has been serving Florida’s 23rd district since 2013. The Democrat previously represented the state’s 20th district from 2005 to 2013. She’s up for re-election in 2018.

Her net worth is based on estimated assets of $100,000 and approximately $1.3 million in liabilities. A breakdown of her current financial situation is not available, but her 2015 financial disclosure report — posted on OpenSecrets.org — revealed the bulk of her assets consist of stocks and savings plans for her three children. Liabilities include multiple mortgages, lines of credit, credit card accounts and a home improvement loan.

Find Out: The Money Behind Donald Trump’s Cabinet and Advisors

Democrat Alcee Hastings has represented Florida’s 20th district in the House since 2013. He previously served the state’s 23rd district from 1993 to 2013. Hastings is up for re-election in 2018.

His net worth was calculated based on zero assets and $2.4 million in liabilities. One of the poorest members of Congress, his liabilities include a mortgage estimated at $100,001 to $250,000 and the rest in legal fees, according to his 2015 financial disclosure report, which was obtained by OpenSecrets.org.

Previously a U.S. District Judge in Florida, Hastings was convicted of bribery and impeached in 1989. This caused him to rack up more than $2.5 million in attorneys’ fees, according to a 1993 article in the Sun-Sentinel newspaper.

Republican David Valadao was elected to serve California’s 21st Congressional District in 2012. He’s been at work representing the district since 2013, and he’s up for re-election in 2018.

Of all the members of Congress, Valadao is the poorest. His net worth is based on assets of $2 million and $19.5 million in liabilities.

Also a dairy farmer, his assets include a $2 million stake in the family farm, according to his 2016 financial disclosure report, which was posted on OpenSecrets.org. His extensive liabilities were caused by financing for feed, equipment and land for the business.

Click through to discover the financial perks you get if you become president.

As the veteran congresswoman representing California’s 12th District, Pelosi is rooted in politics. The daughter of Baltimore’s former mayor and five-term Maryland congressman, Pelosi’s political ambitions began while she was an unpaid intern for a Democratic senator in 1962.

With over a half-century of experience as a civil servant, Pelosi had unpaid roles until she was elected to Congress in 1987. Over the last 31 years, her net worth has ballooned to a reported $16 million, positioning her as the 30th richest member of U.S. Congress, according to Roll Call.

Related: These Are the Wealthiest Congressional Districts Across America

Pelosi’s salary as current minority leader brings in $193,400 annually. She’ll get a raise to $223,500 if she resumes her role as speaker. The majority of her wealth is attributed to the success of her venture capitalist and real estate tycoon husband of 55 years, Paul Pelosi. His firm, Financial Leasing Services, has a track record of wise investments in companies like Facebook, Apple and Disney, as reported by the Los Angeles Times in 2015.

Among the couple’s shared properties are an estate and vineyard in Northern California’s stunning wine country estimated to be between $5 million and $25 million, and within the past few years, the couple sold their California ski home for $1.53 million in 2016.

Click through to read more about the highest- and lowest-paying jobs in government.

This article originally appeared on GOBankingRates.com: Nancy Pelosi Is Poised to Lead the House Again — See Her Extensive Net Worth