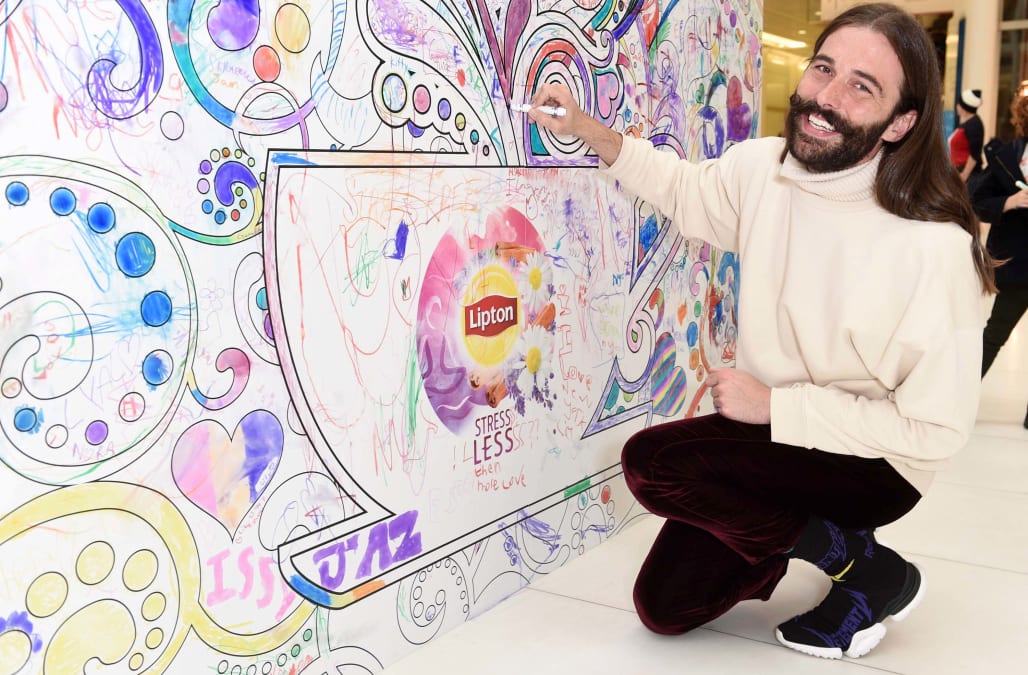 Okay, we’ll say it: Mondays are kind of the worst.

The work week is beginning again and the stress from obligations leftover from weeks prior coupled with the anticipated stress of a fresh pile of deadlines and meetings for the week ahead can almost seem debilitating.

But if you take that attitude, doesn’t it almost become a self-fulfilling prophecy that all Mondays are automatically Bad with a capital ‘B’?

That’s pretty much the opposite of that level of self-care we’re all trying to achieve — especially with our busy lives and careers.

Grooming Guru and Wellness Queen himself, Jonathan Van Ness of Netflix’s ‘Queer Eye’, is certainly right on-board with that sentiment:

“As a hairdresser, Sunday and Monday were always my days off so Monday was always like fierce for me … Mondays are a gorgeous day just like any other day — they’re cute and you just have to shift your little baby perspective, thats all.”

Van Ness, who’s teamed up with Lipton in an effort to promote the ever-important concepts of wellness and self-care (two things his nearly 2.7 million Instagram followers and fans worldwide look to him for inspiration on) spoke to us about making these ideas ones that are both mainstream and prioritized:

“I love the idea of a company like Lipton that’s been around for a long time that’s familiar, and she’s gorgeous and people love her … I love that Lipton is taking this opportunity to talk about wellness in a really mainstream way … we can talk about stressing less and relaxing and unwinding and I love everything about what this is saying. I think that it’s bringing the idea of stressing less and connecting more to so many people that need to hear it. I just think that sometimes when we think about stress and wellness, there’s so many people that — the second that you say that — it kind of grinds their gears as Peter Griffin [from ‘Family Guy’] would say and it kind of just instantly shuts them off. So I think that it's kind of like, when certain people will talk about [wellness], it opens up more doors for people to kind of get into ‘Oh, what is that about?’"

The well-known beverage company's Lipton Wellness line includes caffeine-free teas with easy-to-understand names like ‘Soothe Your Tummy’ and ‘Bedtime Bliss’, so that drinkers can take the stress out of figuring out which kind of supplements and ingredients will soothe them and simply just choose the tea with the name that calls out the remedy they’re looking for.

Van Ness, who's career has him jet-setting and working nearly around the clock, is a fan of one of the supplements in particular:

“I love a gorgeous hot coffee or a hot beverage, I always want something in my hand. But at a point, I was like ‘Oh my gosh, I am way too caffeinated I cannot go to sleep!’ because i was still drinking coffee all the livelong day and that really was affecting me. So when I discovered the [Lipton] Wellness line, I was like ‘This moment is so tasty and I also feel like she’s kind of soothing’.

I’m on the plane all the time and I’m constantly traveling and on tour and doing this and that, so I started switching over and now I always keep a few baby bags of Stress Less in my little (well it’s not little, in reality it’s gigantic and goes with me everywhere) tote … I really love to switch to that in the afternoon because there isn’t any caffeine in it and it tastes great … cinnamon, lavender notes, chamomile coming through for the win!”

It seems impossible to think that someone as confident and dynamic as Van Ness would ever have moments where he feels stressed.

But when it comes to watching his beloved Team USA Gymnastics, you better believe those stress hormones are kicking in at full throttle:

“Today I’m really stressed out because I don’t have the Olympic channel on my phone and that’s where the men’s final is and actually my mom’s password [that] I usually use isn’t working right now!”

Much of what makes Van Ness appear so at ease and comfortable in all of his endeavors is his ability to display all emotions on the spectrum, a vulnerability that is both enviable and relatable and makes you want to be his best friend within four seconds of talking to him.

This ability to relate plays a major role on ‘Queer Eye’, where Van Ness has to wear many hats — and sometimes that means playing the role of ‘De-Stressor’ to the 'heroes' that he works with:

“I think in the past from episodes that you have seen, I think Neal was someone who was really scared to trim his beard shorter and cut his hair off .. I remember when we were there I was like ‘feel the chair supporting your back’ we were really practicing more mindfulness, a lot of literal ‘feel your inhale, feel your exhale, feel the floor supporting your feet’ because he was really nervous. And I actually think that was one of the best episodes ever and I love him so I would say I do practice mindfulness on the show."

After all, watching any episode of ‘Queer Eye’ with Van Ness' witty, authentic quotes and loving, feels-inducing moments of bonding with both his cast mates and the show’s 'heroes ' is enough to take the stress out of any viewer's life for the moment.

So how does Van Ness personally find a way to de-stress? Through grooming, of course:

“Grooming isn’t so much about an outside job its more of a way for you to connect with yourself. And it kind of creates a window in the morning or at night or whatever your self care ritual is … and it’s kind of like icing on the cake when people are like ‘Oh, your skin’s so pretty’ or whatever but that’s literally a time where I’m not checking my email, I’m not on the [Insta]gram … there’s a difference between saying ‘I’m going to take care of myself’ and actually doing things that make you feel taken care of. And I do think that especially in our generation — and I am so guilty of this — I’ll say that I’ve taken care of myself and it’s like ‘Oh, I did something’ but really it’s like ‘No, honey’ … No shame, I love a contour moment and I love a heavy face of makeup I mean let’s put all of it on but it doesn’t have to be that. It can be moisturizer, it can be sunscreen, it can be an essential oil in the shower, it can be tiny little things.”

Thinking of being ‘cared for’ as the end result of what you should feel after practicing self-care seems simple but it’s often something that’s lost on us through the process of trying to achieve this ultimate level of wellness — sometimes it’s the small things that leave us feeling safe and secure that go the longest way in the end.

More from Aol.com:
Nancy Pelosi is Poised to lead the House again — See her extensive net worth
Is your representative one of the 10 poorest people in congress
Cardi B inks new deal with Reebok
Holiday Heroes: One Massachusetts man brings strangers together every Thanksgiving
Tech's biggest CEOs and founders lost $61 billion during the stock market's plunge in October — here's who got hit hard (FB, AMZN, AAPL, NFLX, GOOG, BIDU, BABA)