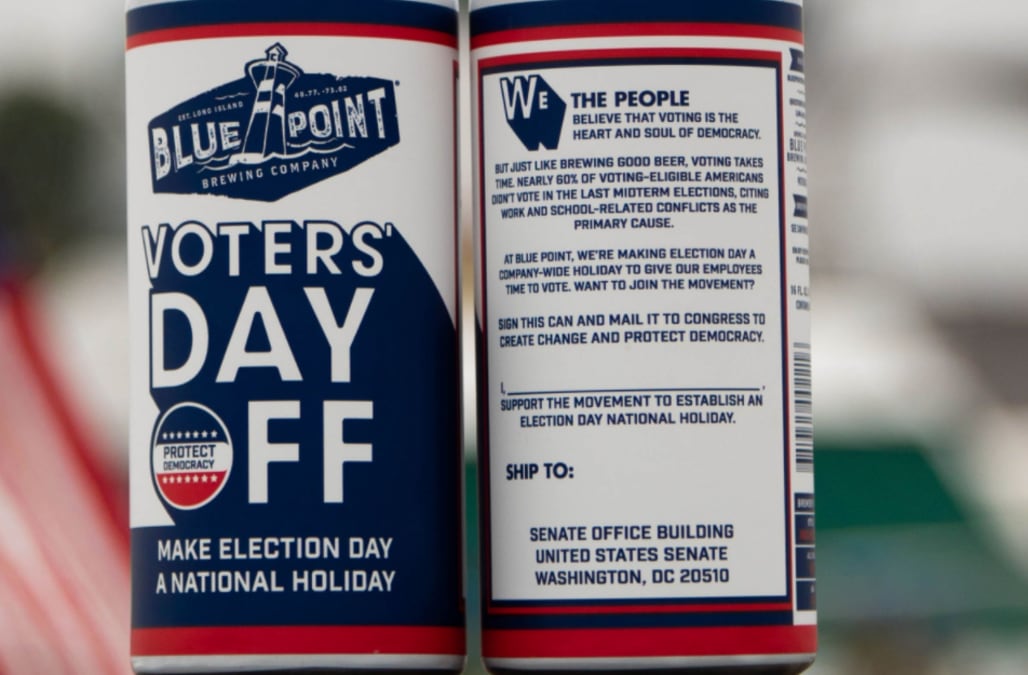 Unless you’ve somehow managed to avoid all forms of social media (and digital media at large) over the past few months, the millions of posts and words of encouragement to get out and vote in this year's midterm election on November 6 have probably screamed out at you every time you've glanced at a screen.

But the ever-prevalent rallying cries aiming to get as many people to the polls as possible this year are for good reason, as it was found that nearly 60 percent of Americans who were eligible to vote in the last midterm election did not.

And the number-one-cited reason for the lack of political peeps at the polls? Work and school-related conflicts.

In an effort to get students and professionals alike out and voting, one company is calling for congress to make Election Day a federal holiday by uniting Americans with the one good thing they can all agree on: Beer.

Blue Point Brewing Co. (based in Long Island, New York) is not only giving its employees November 6 off, but the company has also released a brand-new craft IPA called ‘Voter’s Day Off’ which includes a petition to make Election Day a federal holiday (addressed to congress) printed on the back of the can that consumers can sign and ship off.

President of Blue Point Brewing Co., Jenna Lally, spoke to how the beer and the campaign came to be:

“The decisions really started over the summer. Our founder, Mark [Burford], and I were chatting about the elections coming up and voter turnout. And I think, unfortunately, there’s been a lot of press around how low voter turnout has been in the past midterms … [Blue Point has] hourly employees and people who work multiple jobs and there’s a good chance many of them have to make the decision between picking their kids up or working and voting -- and that decision should never be something that you have to make. And so for us, coming to that realization and wanting to make sure that our people had the time to vote, it made it an easy decision for us. I would say in August we communicated that to our employees, that we would be closed, and initiated the process around creating this IPA with a petition on the can to encourage other companies and to really raise awareness around this as an initiative.”

Lally recalls that the conversation was ongoing and “evolving” but there was one constant throughout the creation of both the campaign and the beer itself:

“The crux of it was using beer to make the change … our passion is about beer. And to make a change or to have some sort of impact on the change through beer would be amazing for us … we went back and forth with how we could really get people tied into this cause — physically signing a petition is one way.”

The "Voter's Day Off" beer itself is new to both Blue Point and the craft beer world at large:

“The beer itself is called ‘Voter’s Day Off’, it’s an IPA and on the back of the can is a petition rallying congress to make Election Day a federal holiday so that all people have the time to vote. On the petition, we also cite the fact that the primary reason people cite for not being able to make it to the polls is work and school-related conflicts … our mission with this petition is to encourage congress to make a holiday out of election day so that everyone has the time to vote and that there’s a space for you as an individual to sign the back of the can.”

A few weeks ago, Lally and her team brought a boatload (literally) of signed cans down to congress, serving as both a physical and metaphorical representation of the change that both Blue Point and its consumers are demanding:

"We brought the cans down to congress — you actually can’t bring a boatload of cans into congress, but we parked our boat right outside so that people could see how big the petition had gotten. We also have a Change.org petition online for those people who haven’t been able to get their hands on the beer … I’m hoping once the campaign wraps up that we’ll have a bigger opportunity to communicate this message.

The beauty of craft beer versus other big beverage, potentially, is our ability to innovate and do lots of different things because we do things on a smaller scale … We can act quickly, produce a beer around a cause that we feel really passionate about and get it to market.”

Lally, who worked for Blue Point for a number of years before dabbling further into the craft beer market with Anheuser-Busch and Goose Island before returning back to her original roots, is hoping to both showcase and share the passion and the goodness of the people in the Blue Point community with the larger community of the brewing company’s consumers and beyond through this campaign:

“I’m from Long Island originally, and [Blue Point] was the first craft beer I ever had, really, because it was one of the first ones in this market. I always really loved the brand and the beer.

I really re-fell in love with the beer and the brand and the people. I think one of the best parts about craft brewery (and Blue Point specifically) is that it’s really about our place and our people. We’re  heavily influenced by Long Island and the ingredients out here. And being in such close proximity to New York City, we’re also heavily influenced by the culture that it brings. But the people also are a big part of why I love this job … beer is there when you’re hanging out with your friends, it’s there at dinner, it’s really this product that brings people together. And so to be part of that is really a dream job for me.”

This company spirit can be traced back to Blue Point’s founders, Mark Burford and Pete Cotter, and the dedication to giving back that they’ve inspired within their employees:

“Our founders have always been very tied into their local community and local causes, whether it’s political or not … this is the first time we used our can as a physical petition. The reaction has been so overwhelmingly positive that it makes me really excited. I also read a statistic that they expect this Midterm election to have the highest voter turnout in over 75 years. So if that’s a result of things like this [campaign] then we’re going to continue to push the boundaries of change whether it be in our environment or behind good causes that we feel are worthy about it.”

But if you’re trying to get your hands on a cold can of "Voter’s Day Off," you’ll have to make a trek out East:

“Right now, it’s available in route acting room. we started small this year in New York only. and next election cycle we will distribute that more broadly, so our goal is to continue to brew the beer every election until change happens.”

But don’t worry — you can still sit down with a cold Blue Point of any iteration and sign the Change.org petition (which has now garnered over 60,000 signatures) simultaneously (same message, different method.)

And in case you missed the message here, go out and vote on November 6 -- in the name of good beer, if nothing else.