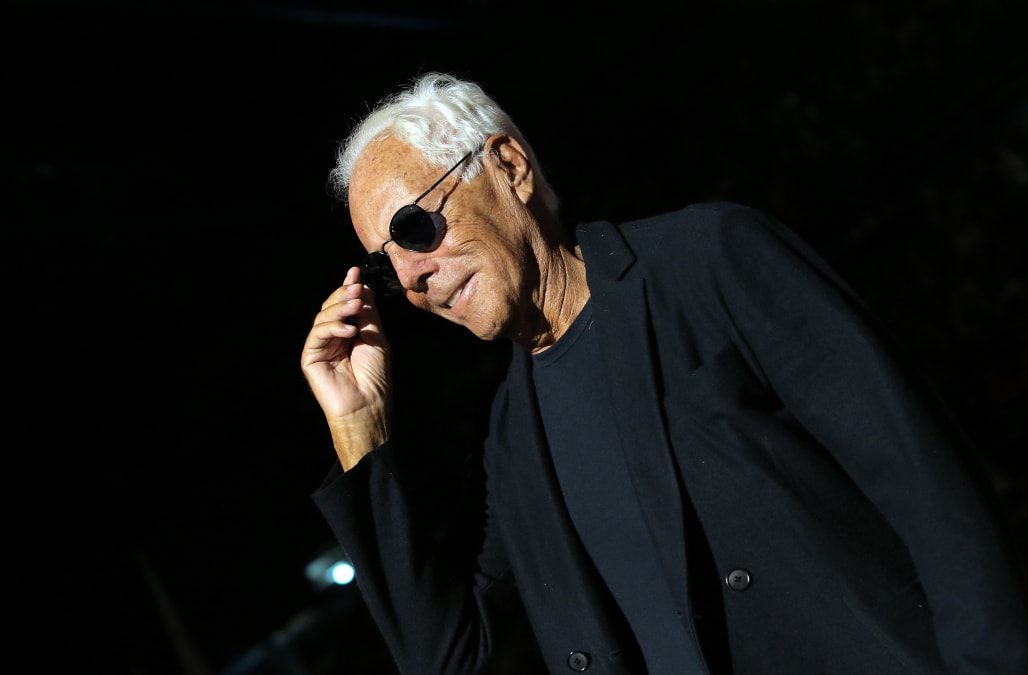 Giorgio Armani, the co-founder and sole owner of fashion house Armani, is worth $8.8 billion, according to Forbes.

His empire also spans industries that include accessories, perfume, makeup, interior design, real estate, restaurants, and hotels. The business mogul brought in $2.7 billion in revenue in 2017, according to Bloomberg, which looked at filings with Italy's business register.

The 84-year-old spends part of his fortune on multiple private homes all over the world, from Italy to the South of France to the Caribbean island of Antigua. He also owns a 213-foot luxury superyacht.

Here's a look at what nearly $9 billion buys:

How Giorgio Armani spends his fortune

Giorgio Armani is one of the richest people in the fashion industry, with a net worth of $8.8 billion.

Armani was born in the northern Italian town of Piacenza in 1934 and later attended medical school at Piacenza University for two years before leaving for his military service.

While on leave from the military, Armani got a job as a window dresser at Milan department store La Rinoscente, where he worked up to a buyer position, marking his first foray into fashion.

In 1965, Armani started working as a designer at fashion house Nino Cerruti, where he met Sergio Galeotti, who would later be his business partner.

Armani started Giorgio Armani S.p.A. with Galeotti in 1975, with Armani focusing on the creative side and Galeotti handling the business aspects.

The company expanded to the US in 1979 and gained global attention for designing Richard Gere's clothing in his 1980 film "American Gigolo."

Despite the death of his partner in 1985, Armani continued to expand the business in the 80s and 90s, introducing new brands including Emporio Armani.

Armani is known for his androgynous approach to fashion.

"I dressed men in women's fabrics, and stole from men what women wanted and needed — the power suit," he said.

He brought softened, minimalist style to high-end menswear, according to Forbes.

He launched Armani Hotels & Resorts in 2005, which operates luxury hotels in Dubai and Milan, Italy. In 2016, the Dubai location was named the most luxurious hotel in the world.

Armani Hotel Dubai is located in the Burj Khalifa, the tallest building in the world.

The hotel also hosts swanky fashion events, including the gala for the Vogue Fashion Dubai Experience in 2015.

The hotel's nightclub, Armani/Privé, is a stylish hotspot that stays open until 3:00 a.m. and "embodies the essence of the Armani brand," according to the website.

The cheapest rooms available to book at the hotel for November 2018 were $680.

Armani's empire extends to cafés in Cannes, France, Doha, Qatar, and other locations.

Armani’s design skills extend to vehicles as well. In 2003, he collaborated with Mercedes-Benz to design a sleek sports car, the Mercedes-Benz CLK. Only 100 of the cars were sold.

He walked the red carpet with actress Julia Roberts at the Met Gala in New York City in 2008.

Armani reportedly spends six weeks each summer with friends sailing his yacht from Saint Tropez around Mediterranean islands that include Ibiza, Formentera, and Sardinia, and then ending up at Pantelleria.

Armani reportedly designed the interior himself.

Armani has hundreds of stores all over the world as of 2018, from Italy to the US to China, Hong Kong, Taiwan, Singapore, Russia, and Morocco.

In 2015, Armani celebrated the 40th anniversary of his company.

In March 2005, he traveled to Japan to attend a preview of the Giorgio Armani exhibition that displayed 30 years of his work, including original sketches and costumes.

Armani travels all around the world for fashion shows and other events relating to his brands.

In 2017, he discussed what a successor to his empire might look like in an interview on Italian TV. "I have several little heirs," Armani said in the interview, referring to his two nieces, his nephew, and his long-time assistant Pantaleo Dell’Orco. "(These are) people who could do good things following up on my path."

Yet, Armani has not definitively said who might replace him if he were ever to retire.

Armani spends part of his $8.8 billion fortune on private residences around the world, from Italy to Saint Tropez, France, to the Caribbean island of Antigua.

One of Armani's homes sit on the little-known Italian island of Pantelleria.

Armani's Pantelleria estate, called Cala Gadir, includes seven houses with outdoor terraces, a pool, and a staff of 12 when he stays there.

He bought the property on the northeast coast in 1979, three years after his first visit.

Armani also has a home on the Caribbean island of Antigua. The house perches on a cliff overlooking Galley Bay on the west coast of the island.

Armani certainly seems to enjoy sunny islands. He's reportedly a regular visitor to the Greek island of Patmos, which draws VIPs from all over the world because of its peacefulness, according to CNN.

In September 2018, Armani held his Milan fashion show in an airport hangar.

He's often seen in Milan for fashion week and other events.

Another Italian locale where Armani spends much of his time is, of course, the country's fashion capital of Milan.

"I arrived with my family from Piacenza in the aftermath of World War II," Armani told Gourmet Traveler. "I studied here, made friends, started working. I built my life here... Today I feel completely Milanese. I love the city very dearly."

In honor of the 40th anniversary of Armani's fashion house, Scorsese wrote a "love letter" to Armani in Vanity Fair, calling him "my old friend, whom I love and admire."

Armani has even mingled with world leaders. Then-French president Nicolas Sarkozy presented the fashion designer with the Legion of Honor in 2008.

Thanks to his legendary status in fashion, Armani often rubs shoulders with celebrities and the elites of Hollywood, the fashion world, and sports.

Armani said in 2015 that he had no plans to retire, saying he would continue to be the sole shareholder of his company while he is alive.

In 2016, however, Armani created a foundation in his name to safeguard his company's future.