How much storm chasers really make 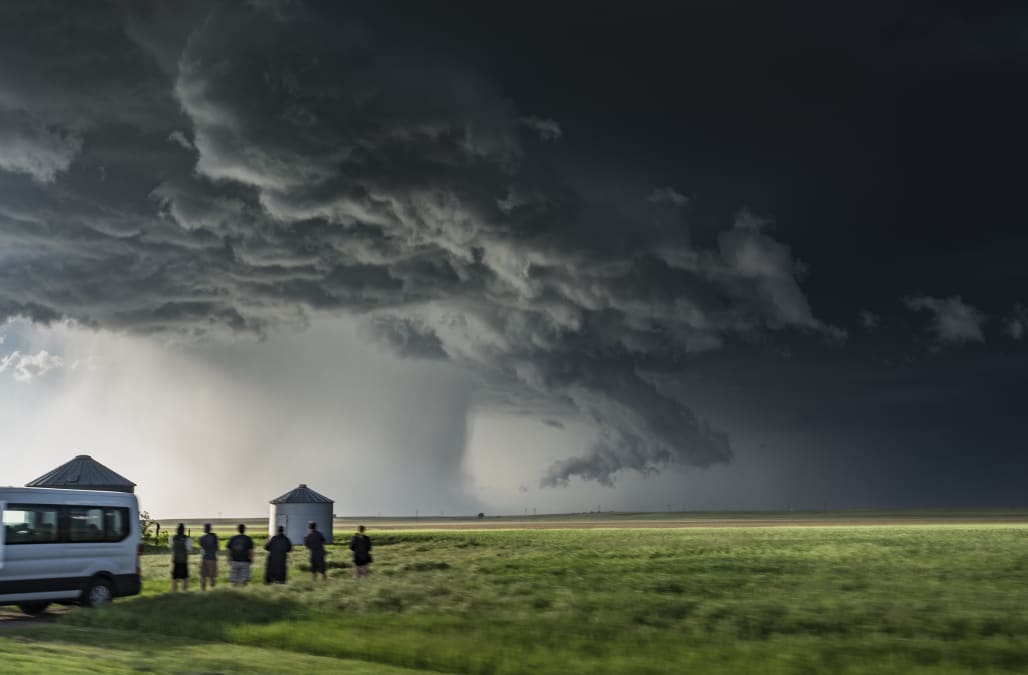 If you get a thrill from being close to the action when a tornado hits, you might be tempted to pursue a career as a storm chaser. However, before you decide to pursue your passion full-time, it’s important to be realistic about the earning potential and the risks involved.

Keep reading to find out more about this weird way to make money.

What Is a Storm Chaser?

Storm chasing usually involves getting close enough to a tornado or severe storm to record its size and wind speed with the appropriate equipment. Many storm chasers have a background in meteorology. Some storm chasers work alone, while others work in small groups.

How Much Do Storm Chasers Make?

The reported salaries of storm chasers vary. According to Career Trend, television stations pay storm chasers an average of $500 for storm footage. Chasers can earn even more if they allow citizens to ride along on their missions: people will typically pay $3,500 to tag along, the website reported.

According to Simply Hired, the average storm chaser makes $74,000 a year, but the few who become stars in the field can make more. Reed Timmer, who gained fame on the Discovery Channel show “Storm Chasers” and now works as an extreme meteorologist for AccuWeather, has amassed a net worth of $250,000. However, many storm chasers are freelance, so they will only make as much as they are able to sell.

RELATED: Take a look at the top U.S. states for millionaires:

10 PHOTOS
10 states with the most millionaires
See Gallery

10 states with the most millionaires
High angle view of Venice beach during sunset. Tourists are walking on footpath by ocean. Shot of beautiful nature and people is taken from above.

Delaware doesn't even rank among the 35 poorest states in the country, but it's the poorest on this list according to median income. The top 1 percent and the bottom 99 percent are separated by a difference of just 16 times in average annual earnings, which is a relatively low rate of economic disparity.

The agriculture, fishing, mining and manufacturing industries continue to dominate the state. Because of its business-friendly atmosphere, more than half of all the publicly traded companies in the U.S. are incorporated in Delaware.

Virginia, where eight American presidents were born, has a relatively low level of income inequality, with the top 1 percent earning 18 times more than the bottom 99 percent. Although the commonwealth suffered a significant economic downturn in recent years, several key indicators suggest that things in Virginia are on the upswing.

New Hampshire residents enjoy the lowest poverty rate of any state in the entire country, and it also boasts the sixth-best nationwide employment rate over the last five years. The average income earned by the bottom 99 percent is 18 times lower than that earned by the top 1 percent.

A wide income disparity exists between the elite and everybody else in Massachusetts, where the average member of the top 1 percent earns 30 times more than the average member of the bottom 99 percent. Although Massachusetts disappointed many with a shrinking economy and stalled wages in the first quarter of 2017, it quickly came roaring back in the second quarter with a burst of economic growth.

Although Alaska has a high concentration of millionaires, the state experiences the lowest level of income inequality on this list. The wealthiest residents aren't particularly wealthy, and the rest of the people in the state do comparatively well. The average income for the top 1 percent is just 13 times greater than the average income earned by the rest of the population. The economy of Alaska can't be compared to that of any other state in the U.S., however, as more than four out of five revenue dollars come by way of the energy industry.

Hawaii's top 1 percenters make just 14 times more than the bottom 99 percent. Like Alaska, Hawaii has a unique economy, dominated by tourism and the military. Hawaiians face a higher cost of living than residents of any other state, as well as the highest housing prices in the U.S. The median home cost is $646,500, which is more than $135,000 higher than the next costliest state.

In the Garden State, there is a huge gap between the wealthiest residents and everyone else. The average top 1 percent earns 25 times more than the average member of the bottom 99 percent. New Jersey has the third-highest median household income rate in America — but the people who live there had better do well. The cost of living in New Jersey is among the country's most expensive, and much of the state consists of bedroom communities for people who work in New York or Philadelphia.

Although America's biggest millionaire metropolitan area is by far New York City, the Empire State doesn't even make this list — but its neighbor does. Connecticut is home to a higher per-capita rate of millionaire households than all but one other state.

Connecticut also suffers from dramatic income inequality — the state's elite are by far the richest 1 percent in America. The average earner among the lower 99 percent, however, makes 43 times less. The state is also suffering a major fiscal crisis that is impacting its budget, pension fund and tax revenue — and the capital city of Hartford is teetering on the brink of bankruptcy.

Leading the list of top 10 richest states according to millionaire concentration is Maryland, the most millionaire-dense state in the country. Home to one of the most educated workforces in the U.S., Maryland enjoys the second-lowest poverty rate in America.

On the border of the nation's capital, the small but influential state boasts the highest median income in America and is still among just 11 states that hold the coveted AAA bond rating.

Maryland has the most millionaires, but what is the richest state in the U.S. in terms of median household income? You guessed it. That's also Maryland.

Find Out: Here’s How Much Extreme Weather Costs Taxpayers

I think we chased for a total of two hours on June 7th in eastern Montana...it was wait, wait, wait, wait, wait and then GO...and then storms were fun for a bit but quickly lined out near dark and we made our way to South Dakota for the next day. But the day yielded one of the best lightning strikes I captured on the plains this year. This was near the town of Terry. Such a spectacular bolt lighting up the hills in the distance, but the crawlers across the sky were crazy. Already looking forward to being out there in 2019. #ig_stormclouds #earthpix #discoverearth #igworldclub #igworldclub #storms #supercells #earthfocus #canon #manfrotto #stormhour #tornado #storms #stormhour #corepunch #wunderground

How Much Does It Cost to Be a Storm Chaser?

Although some storm chasers can make a decent salary, there are a lot of costs required for the job. According to the site StormChase.us, in a year, a typical freelance storm chaser can expect to spend $5,000 on equipment, $6,200 on vehicle costs, $1,500 for hotels and food, and $1,000 for a cell phone and data plan, which comes to a total of $13,700. In a best-case scenario, they might catch 20 tornadoes and sell the footage at $500 a pop, which means they would earn $10,000. That means they would still lose money for the year. Unless you’re employed full-time by a television station, you’re better off pursuing storm chasing as a hobby rather than as a primary source of income.

Our own Jeff Mangum sets his tripod in place ahead of a surging severe storm in the Texas Panhandle during May of this year. Earlier that day we witnessed a brief tornado before the storm became outflow dominant and our focus shifted to capturing beautiful storm structure. . . . . #stormchasing #weather #storm #lightning #tornado #okwx #kswx #txwx #photography #natgeo #greatoutdoors #mothernature #adventure #atmosphere #clouds #twister #supercell

How Do You Get a Job as a Storm Chaser?

According to the site StormChase.us, most storm chasers view the activity as a hobbyrather than a job because it is difficult to turn a profit doing it. If you do decide to pursue storm chasing, the site recommends researching severe storms extensively first to gain an understanding of how to chase storms safely and effectively. The site also recommends taking storm spotter training classes, which are offered by the National Weather Service in areas that are prone to severe storms.

Where Disaster Strikes: These States Receive the Most Natural Disaster Aid Every Year

Risks Involved With Being a Storm Chaser

Although storm chaser deaths are rare, they do occur. The biggest risk is posed not by the storm itself, but due to risky driving on highways, according to an essay on storm chasing safety by Charles A. Doswell III.

“We do several things that put us at risk,” he wrote. “We often drive with less than 100 percent of our attention on the very important task of driving, we’re prone to exceed the posted speed limits, we hurtle down rain- and possibly hail-covered highways, we make sudden stops, turns and starts without much warning.”

The next biggest danger is lightning strikes, followed by the actual storm. To stay safe when chasing a storm, Doswell recommends avoiding the core of the storm and rotating cloud walls, staying alert, being realistic about when it’s time to back off and having an escape plan.

Click through to read about other odd jobs that pay insanely well.

More from Go Banking Rates:
11 Signs Your Retirement Is Going to Be More Expensive Than You Thought
Housebound in Retirement: 20 Ways to Live a Richer Life
Here's the Salary You Need to Be Happy in All 50 States