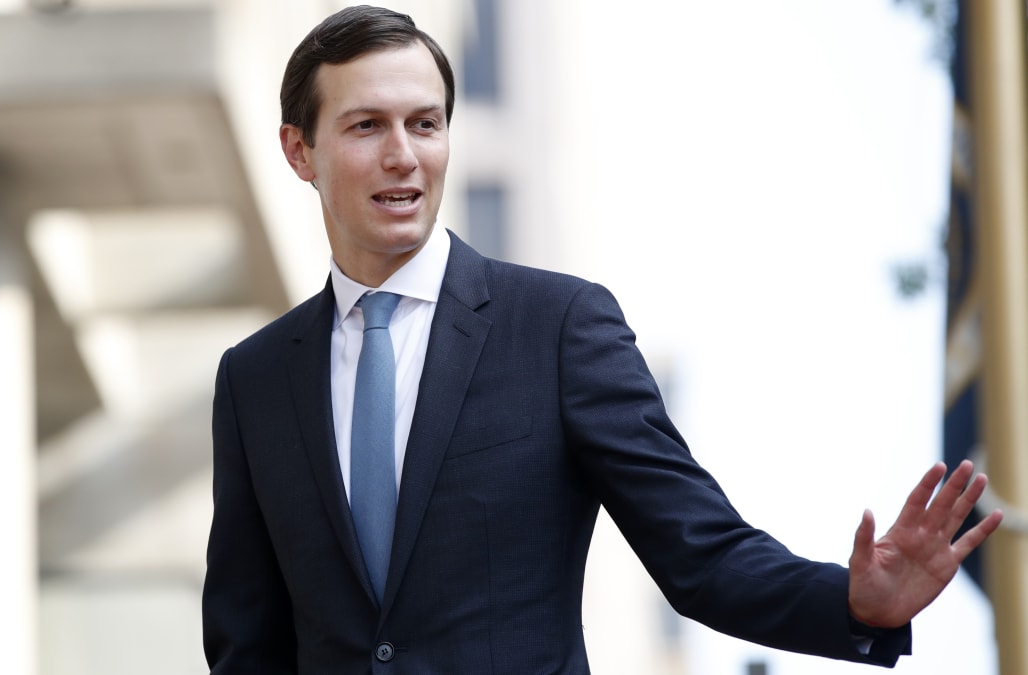 Since Trump’s inauguration in 2017, Kushner has served in multiple roles within the Trump administration, such as adviser and White House innovations director. His presence has drawn ire and received praise. Nikki Haley, the soon-to-be former U.S. ambassador to the United Nations, has referred to him as a “hidden genius.” Here’s a look at the controversial figure’s net worth nearly two years into the Trump administration.

Click to read about Kushner’s brother-in-law, the Trump who commands $100,000 per speaking engagement.

RELATED: Here's a look at the Trump family net worths:

Jared Kushner is over six feet tall. The other thing about him that reaches impressive heights is his net worth.

His net worth also puts him above that of President Trump’s kids. Donald Trump Jr., Ivanka, and Eric are all worth $300 million each.

Most of Kushner’s fortune likely comes from his family’s real estate business, Kushner Companies — which handled more than $2.5 billion worth of transactions in 2017 — but he has invested in other industries as well.

In 2006, Kushner purchased the newspaper The New York Observer for $10 million. He was also one of the co-founders of real estate investment platform Cadre. His stake in the company is worth between $5 million and $25 million as of July 2018, according to Bloomberg.

Kushner and Ivanka took home more than $80 million in 2017, despite both being in unpaid White House advisory roles. Recent financial disclosures also revealed that he held assets worth at least $181 million.

From Assistant to Senior Adviser: How Much Trump’s Staff Makes

Kushner on the Campaign Trail

Kushner and Ivanka have both been credited as invaluable members of Trump’s 2016 presidential election. But it was Kushner who really got the campaign up and running, according to a 2016 Forbes interview.

Before Kushner stepped in, the Trump campaign headquarters at Trump Tower didn’t even include furniture for staffers. Or much staff. Kushner helped Trump get organized by creating speech and policy teams, overseeing finances, and directing Trump’s schedule. He was also able to use his business contacts like billionaire Jack Ma for leverage.

“I called somebody who works for one of the technology companies that I work with, and I had them give me a tutorial on how to use Facebook micro-targeting,” Kushner said.

Case in point, under Kushner’s guidance, Trump MAGA hats and other mercherdise went from generating a revenue of $8,000 a day to $80,000.

Kushner met Ivanka in 2007, and the two wed in 2009. They have three children: Arabella, Joseph and Theodore.

Jared Kushner’s father is real estate mogul Charles Kushner, who served 14 months in prison for illegal campaign contributions, tax evasion and witness tampering. Kushner is the oldest child of his parents, Charles and Seryl Kushner. His brother Joshua co-founded the health insurance startup Oscar Health, which received $375 million from Alphabet, Google’s parent company, in August 2018. Compared to the rest of his family, Jared’s sisters Nicole and Dara remain out of the public eye.

Click to read about another of Donald Trump’s in-laws: Lara Trump.

More from Go Banking Rates:
Eric Trump’s net worth as his charitable foundation faces investigation
Donald Trump Jr. commands $100K per speaking engagement
Lady Gaga’s net worth rising with the premiere of ‘A Star Is Born’