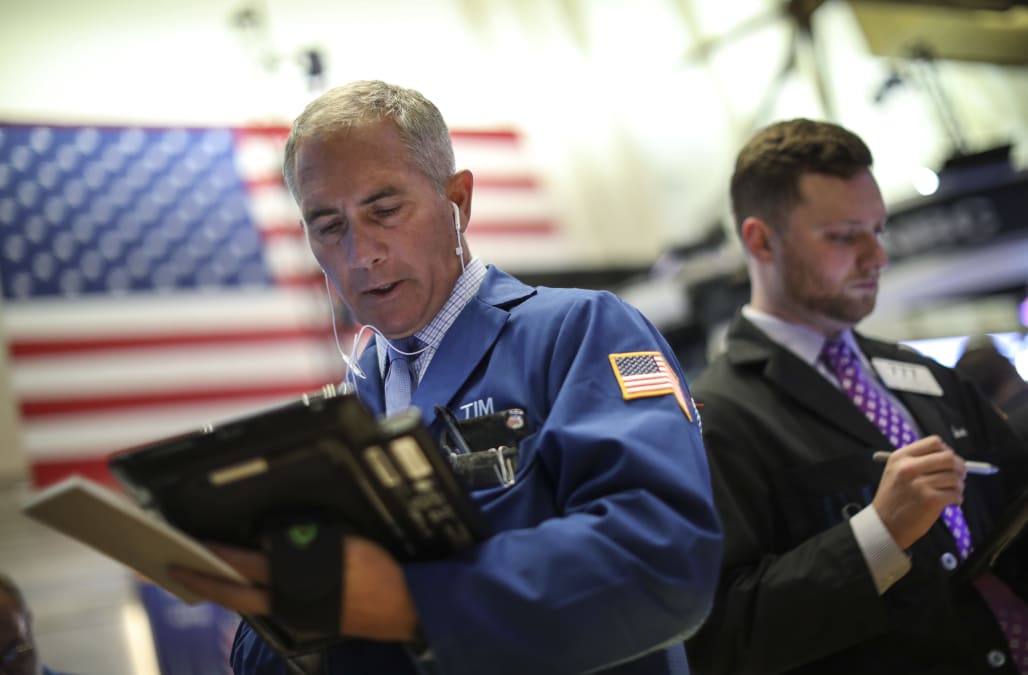 Stocks turned around Friday after six days of sell-offs.

It has been a wild week for stocks, and experts’ explanations for the factors contributing to the sell-off included higher rates, a more hawkish Federal Reserve, midterm elections and trade tensions. Regardless of the catalyst, at least some strategists argue that market volatility is nothing to fear – especially at this time of year.

For some experts, volatility presents a unique opportunity to buy.

“Historically, investing on volatility spikes leads to above average returns in subsequent months,” Jonathan Golub, an analyst with Credit Suisse, wrote in a note Thursday. “[We] believe that investors should opportunistically extend risk against this higher volatility.”

Earnings season unofficially began Friday, and major banks were among the first to report their quarterly results.

Shares of JPMorgan Chase (JPM) rose 1.91% as of 9:30 a.m. ET after the bank reported earnings that exceeded Wall Street expectations. The largest U.S. bank by assets delivered earnings of $2.34 per share on adjusted revenue of $27.82 billion, versus expectations of $2.26 per share in adjusted earnings and $27.44 billion in revenue. CEO Jamie Dimon also said in a statement that the bank just opened its first branch in Washington, D.C.

“The U.S. and the global economy continue to show strength, despite increasing economic and geopolitical uncertainties, which at some point in the future may have negative effects on the economy,” Dimon said in the statement. “We are extremely excited to be expanding again, as smart regulatory policy and a competitive corporate tax system help us to deliver on our commitment to invest in our customers and communities.”

Wells Fargo’s (WFC) stock advanced 0.54% to $51.72 per share after the company reported revenues topping expectations and signaled it would continue boosting its digital banking offerings. The company’s profits rose 32% in the third quarter on account of higher net interest income and lower expenses. The bank posted earnings of $1.13 for the quarter ending September 30, versus estimates of $1.17. This is the first time this year that revenue grew for the bank, with its third-quarter results of $21.9 billion slightly beating average analyst estimates of $21.89 billion.

Citigroup (C) posted a surprise surge in quarterly revenue and profits as the bank benefited from fixed-income trading in the third quarter following interest-rate increases. Net income for the quarter increased 12% to $4.6 billion, reflecting a lower effective tax rate and lower expenses and cost of credit, the bank said in a statement Friday. The company posted earnings of $1.73 per share on revenue of $18.4 billion, flat from the year-before period. Shares of Citigroup rose 3.71% to $70.92 each as of 9:31 a.m. ET.

NEWS: Eyes on the yuan

Treasury Secretary Steven Mnuchin said he is “carefully monitoring” the Chinese yuan’s decline against the dollar in the wake of the escalating trade war, CNN reported Thursday. But the U.S. Treasury Department’s staff reportedly advised Mnuchin that China isn’t manipulating its currency, according to reports from Bloomberg citing two people familiar. A decline in the value of the yuan would help to offset some of the impact of tariffs by making Chinese goods less expensive for Americans to purchase. President Donald Trump has previously accused China of currency manipulation. The yuan has fallen nearly 10% against the dollar this year.

Meanwhile, China’s trade surplus with the U.S. widened to a record $34.1 billion in September, at least temporarily contradicting expectations that increasing tariffs would hamper Chinese exports to the United States. Exports to the American market rose 13% year-over-year. The Chinese monthly trade surplus with the United States last hit a record after August’s reading registered at $31 billion.

U.S. import prices ticked up 0.5% month-over-month in September, the Labor Department said in a release Friday. The results outpaced average economists estimates of 0.2% and revised August results of a 0.4% decrease in prices. This marks the first monthly increase in prices since a 0.9% rise in May. Import prices year over year advanced 3.5%, versus average expectations of a 3.1% increase. Fuel imports posted the largest price increases, rising 3.8% in September after falling 2.2% in August. Excluding fuel, import prices were unchanged after falling 0.2% in August.

Weed stock Tilray is sending investors on an incredible ride

A trade war won’t rattle the ‘white hot’ US economy

White House economist: Tariffs are hurting China much more than the US

More from Aol.com:
Wall Street sells off as worries mount ahead of earnings season
Stocks suffer worst loss in 8 months with the Dow plunging more than 800 points
Stocks are getting slammed for a 2nd straight day