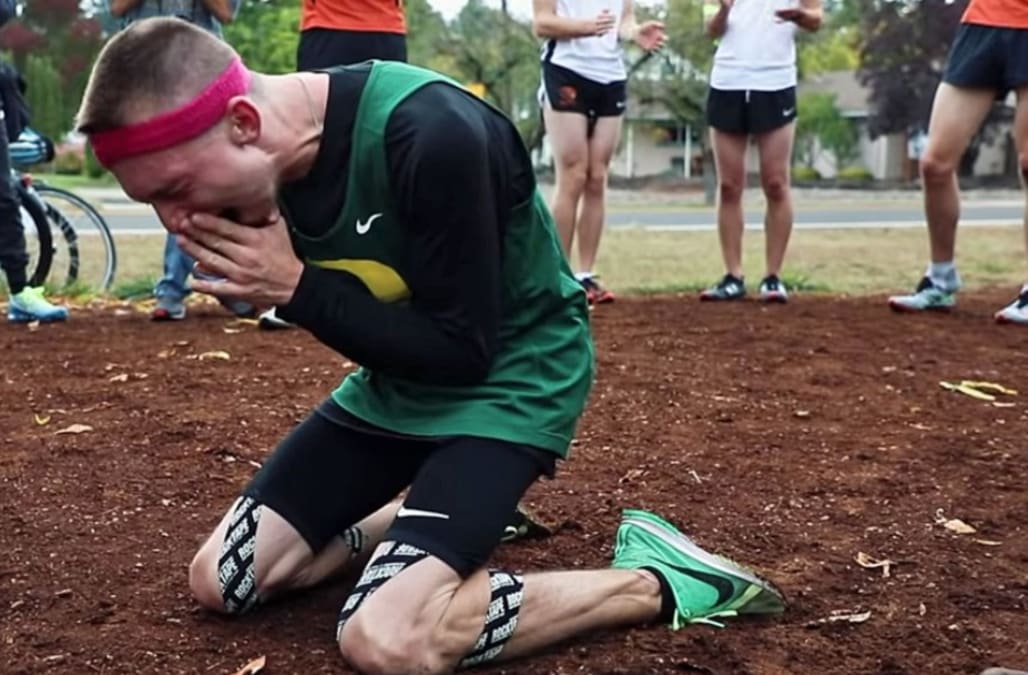 Justin Gallegos lives with cerebral palsy — a condition that affects body movement and muscle coordination — but that hasn't stopped the Oregon junior from pursuing his dream of breaking the two-hour barrier in a half marathon.

According to Anne Francis of Running Magazine, Gallegos used a walker as a child, but he was able to improve his gait enough to walk without one after physical therapy treatment. As a freshman in high school, the Santa Clarita, California native began running for the cross country team and strove to run with the UO Track Club in college.

"Growing up with a disability, the thought of becoming a professional athlete is... like the thought of climbing Mt. Everest," Gallegos said in an Instagram post. "It is definitely possible, but the odds are most definitely not in your favor! Hard work pays off!"

Elevation 0m released a moving video of Gallegos receiving the news on World Cerebral Palsy Day that has since gone viral.

At his first meet with the UO Track Club, one of Gallegos' Nike Pegasus shoes fell off just 50 meters into the race. According to Romaine Soh at the Daily Emerald, Gallegos stopped to pick up the shoe but continued running with it in his hands until teammates coaxed him to stop.

Gallegos is no stranger to press coverage. Before signing his contract with Nike, he had been featured in ESPN and FloTrack pieces. This caught the attention of John Traux, a footwear marketing manager in Nike's running department, and soon the duo was working to develop running shoes for people with disabilities. The FlyEase running shoe — which boasts an innovative lace system and zippered heels for comfort and convenience — is sold in sizes for men, women, and kids.

Gallegos almost did not achieve his goal of running at the University of Oregon due to the price of out-of-state tuition. Traux worked with university officials to help him find finding, and Gallegos' GoFundMe page has already raised $11,818.

In April of this year, Gallegos came in just 3:49 past his dream mark at the Eugene Half Marathon. With Nike's support, he should be running toward that dream for years to come.

I’m still at loss for words! Thank to everyone for the love and the support not only the past couple days but the last seven years of my life! Beyond blessed to officially represent the swoosh! Still can’t believe I made Nike history! Very excited! Big things are yet to come! Trust in the process! And trust in God! All glory to the most high! God is truly good! #NikeRunning #NIKE #SWOOSH #SwooshFamily #Beaverton #Nike72 #JustDoIt #ThereIsNoFinishLine #StrongerEveryMile #NoSuchThingAsADisability #Limitless #Breaking2