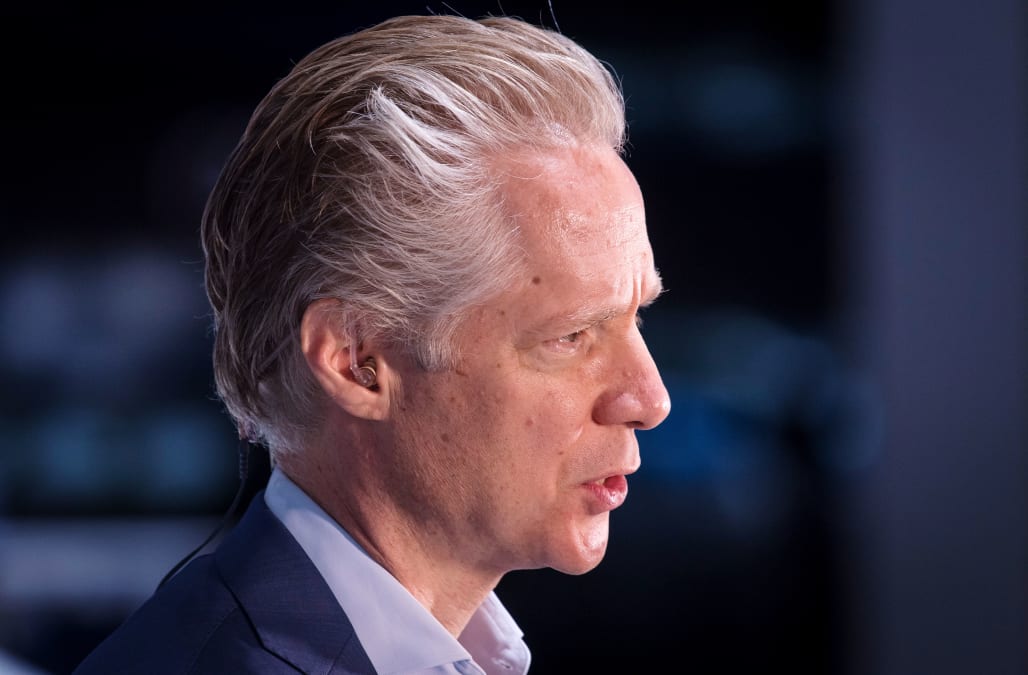 DETROIT, Oct 10 (Reuters) - Volkswagen AG on Wednesday named a new head of its America group as the German automaker pushes to boost SUV sales amid weakening demand for cars.

Scott Keogh, currently head of Audi of America, will become president and chief executive of Volkswagen Group of America as well as head of the Volkswagen brand for the North American region effective Nov. 1, the company said.

Keogh, 49, will succeed Hinrich Woebcken, who will remain with the company as an adviser.

"Scott Keogh, who led Audi to excellence in the U.S., will build upon the momentum and implement the next stage in the growth strategy as we continue to develop Volkswagen into a more relevant player in North America," Volkswagen CEO Herbert Diess said in a statement.

Woebcken, a former BMW executive who ran global purchasing among other jobs, was named in January 2016 as head of VW's North American region, after the automaker admitted to using secret software to evade diesel emissions standards.

RELATED: Take a look at the history of Volkswagen:

History of Volkswagen
circa 1950: Rows of ' Beetle ' cars at a German Volkswagen plant. (Photo by Fox Photos/Getty Images)
View of a Volkswagen Beetle, 1960s. (Photo by Hulton Archive/Getty Images)
circa 1975: Volkswagen Beetle cars parked. (Photo by Keystone/Getty Images)
DETROIT, UNITED STATES: Members of the media surround the new Volkswagen Beetle after its introduction 05 January at the North American International Auto Show in Detroit, Michigan. The Beetle, the best selling car in history, is being offered on the US market after a 19 year absence. AFP PHOTO/Matt CAMPBELL (Photo credit should read MATT CAMPBELL/AFP/Getty Images)
The New 1999 Beetle From Volkswagon. The Trademark Beetle Body Shape Is Immediately Recognizable, Though It Shares No Parts With The Old Beetle. It's Both Larger (161.1 Inches In Length And 96.3 Cubic Feet Inside) And More Powerful Than Its Predecessor And The Engine Is No Longer In The Back. The Car Is Available With A New Turbocharged 150-Horsepower 1.8-Liter Four-Cylinder Engine, A 115-Horsepower 2.0-Liter Four-Banger Or A High-Tech Turbo Direct Injection Diesel Engine That Gets 48 Mpg On The Highway And Has A Driving Range Of 700 Miles. The New Beetle's A Truly Modern Volkswagen, With A Fully Galvanized Body And German Engineered Suspension. Plus A Security System, Airbags* And 6-Speaker Cassette Stereo. (Photo By Getty Images)
NUERBURGRING, GERMANY - OCTOBER 07: INTERNATIONALES ADAC EIFFELRENNEN 2000 Nuerburgring; VW NEW BEETLE CUP (Photo by Christof Koepsel/Bongarts/Getty Images)
384066 02: FILE PHOTO: The new Volkswagen 'Microbus' concept vehicle is displayed for this publicity photo. The Microbus was introduced January 7, 2001 at the North American International Auto Show in Detroit, MI. (Photo courtesy of Volkswagen/Newsmakers)
398508 01: UNDATED FILE PHOTO A redesigned Volkswagen Beetle is displayed in this undated file photograph. Volkswagen officially opened a new assembly hall near Dresden, Germany, December 11, 2001 to produce the new Phaeton luxury car, which represents a dramatic new step for the German car company away from its traditional medium and small car market. (Photo courtesy Volkswagen AG/Getty Images)
A worker walks past a Polo car at a production line in Shanghai Volkswagen Automotive Company, 09 June 2003. One out of every 120 Chinese now own their own car as the government announced that there were more than 10 million privately owned cars plying Chinese roads, state press said. AFP PHOTO/LIU Jin (Photo credit should read LIU JIN/AFP/Getty Images)
SYDNEY, AUSTRALIA - OCTOBER 16: The Volkswagen Golf R32 on display during the Sydney International Motorshow at the Sydney Exhibition Centre October 16, 2003 in Sydney, Australia. The Sydney International Motorshow is the largest collection of automobiles on show in Australia with sixty new production models unveiled and concept vehicles on display. (Photo by Cameron Spencer/Getty Images)
DETROIT - JANUARY 5: Volkswagen displays the Concept T vehicle at the North American International Auto Show January 5, 2004 in Detroit, Michigan. The show, which will feature more than 700 vehicles, opens to the public January 10. (Photo by Bryan Mitchell/Getty Images)
ZOUERAT, MAURITANIA: Finnish Juha Kankkunen drives his Volkswagen Touareg 05 January 2005, during the sixth stage of the 27th Dakar Rally between Smara and Zouerat in Mauritania. Reigning champion Stephane Peterhansel of France won the stage. Peterhansel, hampered by a cold for two days, crossed the finishing line in 4hr 0min 29sec to beat out fellow Mitsubishi driver, and two-time champion, Hiroshi Masuoka of Japan by 5min 58sec and the Volkswagen of Bruno Saby by 7min 26sec. AFP PHOTO MARTIN BUREAU (Photo credit should read MARTIN BUREAU/AFP/Getty Images)
WOLFSBURG, GERMANY - MARCH 13: (L-R) Volkswagen Board members Detlef Wittig, Francisco Javier Garcia Sanz, Horst Neumann, Martin Winterkorn, Chairman of German automaker Volkswagen, Jochem Heizmann and CFO Hans Dieter Poetsch pose at the new Volkswagen model 'Scirocco' during the company's annual press conference on March 13, 2008 in Wolfsburg, Germany. The Volkswagen Group significantly increased its earnings last year. Profit before tax therefore grew to 6.5 billion euros. (Photo by Andreas Rentz/Getty Images)
Up Next

In total, VW has agreed to spend more than $25 billion in the United States for claims from owners, environmental regulators, states and dealers and offered to buy back about 500,000 polluting U.S. vehicles. The buy backs will continue through the end of 2019.

Volkswagen's U.S. sales through September this year were up 5.5 percent to 266,228 vehicles, but it is still struggling to shift gears away from slow-selling cars to SUVs.

Sales of the company's brand new Jetta sedan are down 33 percent this year, while sales of the Passat and Golf cars are also down 34 percent and 38 percent, respectively. Two new sport utility vehicles – the Atlas and Tiguan – now account for more than 40 percent of all U.S. sales.

Keogh will be succeeded at Audi, effective on Dec. 1, by Mark Del Rosso, who is currently president and CEO of Bentley Motors and previously was chief operating officer of Audi of America, the company said. Del Rosso's replacement at Bentley will be named later.

Keogh joined Audi as chief marketing officer in 2006 and was promoted to president in 2012, helping the brand double sales in the region from 2010 to 2015, the company said.

Del Rosso, 54, joined Audi of America as COO in 2008 from Toyota Motor Corp. (Reporting by Ben Klayman in Detroit, additional reporting by David Shepardson in Washington Editing by Marguerita Choy)