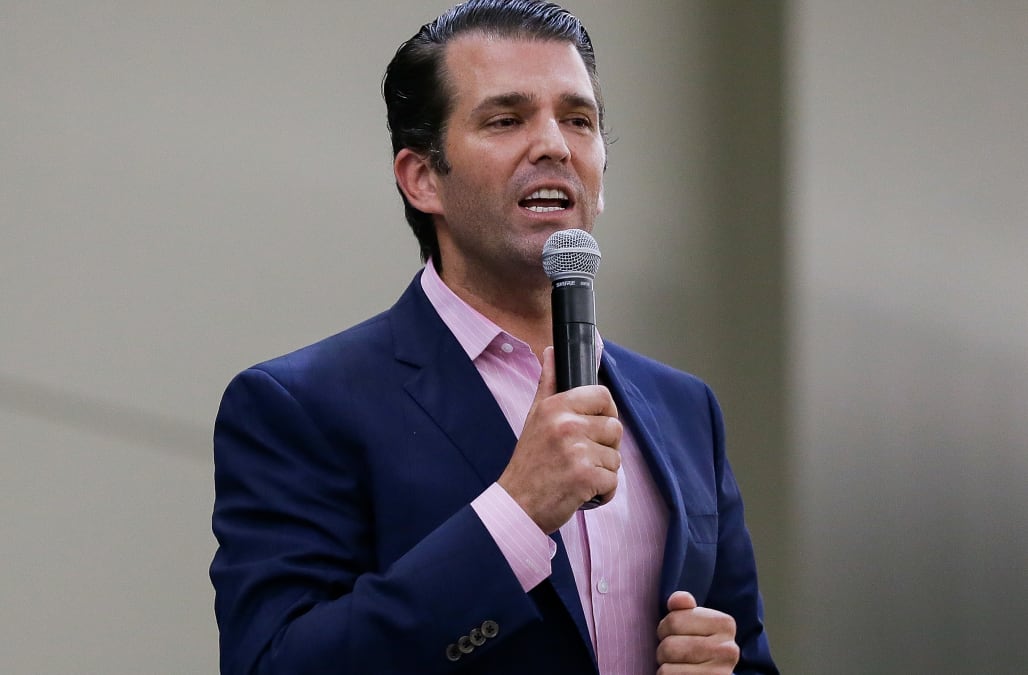 When it comes to President Donald Trump’s two eldest sons, they have their differences, but their similarities keep them both employed at the Trump Organization and in the news. Both men share a similar careers and are staunch supporters of their father — labeled as their father’s “most ardent cheerleaders” by Politico in 2017 — and both enjoy big-game hunting.

But Donald Trump Jr. has been in the headlines more frequently due to events like his involvement in the controversial meeting with Russian representatives during his father’s 2016 presidential campaign, his recent divorce from his wife of 12 years, and his habit of posting off-the-cuff tweets that provoke bewilderment and criticism, similar to his father’s tweets. But his controversies have not limited his earning capacity — Donald Trump Jr. is worth millions. Find out how he measures up to President Donald Trump’s net worth.

Click to read about his sister Ivanka Trump’s net worth.

RELATED: Check out Donald Trump Jr. and his father throughout the years:

Donald Trump Jr., real estate executive and entrepreneur, is worth $300 million, according to Celebrity Net Worth. He is the eldest son of President Donald Trump and Ivana Trump.

His expansive wealth comes from a variety of income sources, including his job as executive vice president of the Trump Organization — a title he shares with his younger brother Eric Trump. Trump Jr. is responsible for new project acquisition and actively oversees a number of aspects of the organization, including deal evaluation, pre-development planning, construction and branding.

Related: These Are All the States With Trump Properties and Businesses

Other sources of income for President Trump’s eldest child include paid speeches, which bring in up to $100,000 per engagement.

Among his assets are three 12th-floor units at the Sovereign, a post-war co-op located in New York City’s Midtown East. Trump Jr. originally purchased the units for a total of $4.2 million, according to property records obtained by the New York Post.

Check Out: How Much President Trump’s Lavish Properties Are Worth

Donald Trump Jr. Is Following in His Father’s Footsteps

Donald Trump Jr. — often referred to as Don, Don Jr. or Donny — was born on New Year’s Eve in 1977. After his parent’s divorce in 1990, Trump Jr. and his siblings, Eric and Ivanka, continued to live with their mother, Ivana, in New York until they were sent to boarding school. After graduating from high school, he followed in his father’s footsteps and attended the Wharton School at the University of Pennsylvania, where he earned his degree in finance and real estate.

Famous Families: The Kardashians to the Royals — 15 Families Getting Rich Together

Here are some of the most notable life and career highlights of Donald Trump Jr.:

More from GO Banking Rates:
Barack Obama Net Worth: From President to Netflix Producer
Tiger Woods Net Worth: How Much the Golf Superstar Is Worth Now
Fast Facts About Tony Robbins and His $500 Million Fortune