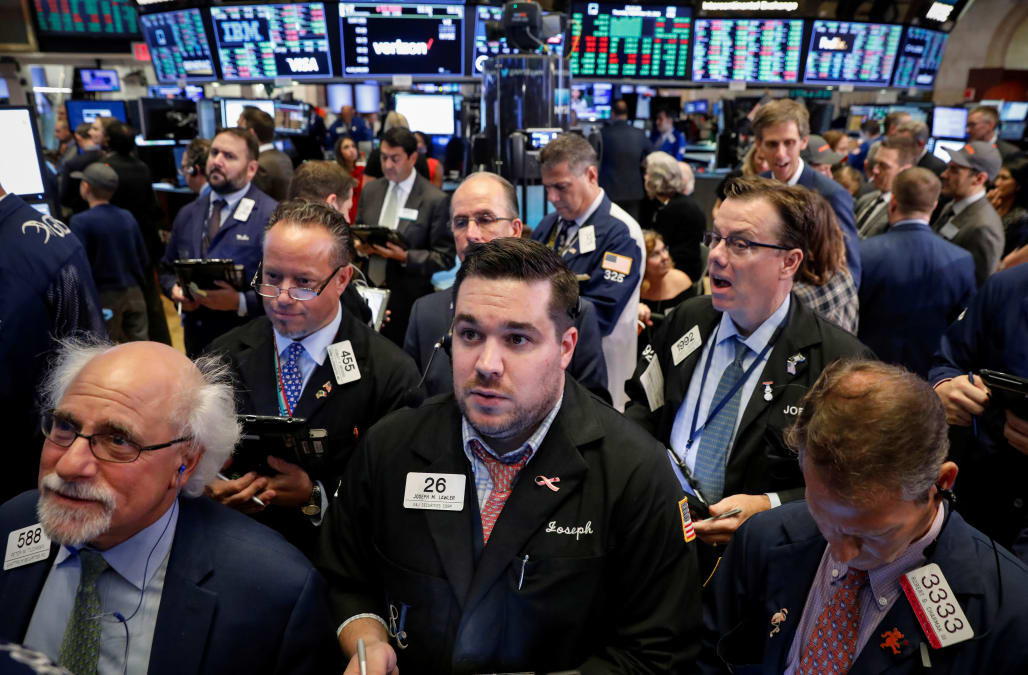 NEW YORK, Oct 2 (Reuters) - The Dow hit a record closing high on Tuesday, but another drop in Facebook shares weighed on both the S&P 500 and Nasdaq, driving both to finish in the red.

Dividend-paying sectors were the best performers of the major S&P sectors, with utilities up 1.3 percent and consumer staples up 0.6 percent. Facebook, Netflix and Amazon, part of the so-called FANG group of stocks, kept the Nasdaq in check.

The Dow was boosted by names such as Boeing and Caterpillar as investors remained upbeat on trade-sensitive companies following the deal negotiated between the United States, Canada and Mexico.

"These are all good companies that have incredibly high valuations so they are susceptible to the flu," said Stephen Massocca, senior vice president at Wedbush Securities in San Francisco. "It is easy to create fear in these names, given the valuations and this Facebook story, that is bleeding over to these other names."

The NYSE FANG+TM index, an equal-weighted index of five core FANG stocks, was down 4.2 percent for September.

The smallcap Russell 2000 index was off 1.01 percent. Smaller names, which had been viewed as being more insulated to trade pressures, are losing their luster following Sunday's late-night North American trade agreement. The index is now down nearly 5 percent from its Aug. 31 high.

Financials were little changed, shaking off earlier losses stemming from a drop in Italian banks after a senior lawmaker in one of Italy's ruling parties said most of the country's economic problems would be resolved if it readopted a national currency.

"That is really a blip, it definitely doesn’t bleed through to the U.S. financial infrastructure," said Peter Kenny, founder of Kenny’s Commentary LLC and Strategic Board Solutions LLC in New York.

PepsiCo lost 1.80 percent as disappointing margins due to higher commodity and transport costs overshadowed a quarterly profit that beat estimates.

Declining issues outnumbered advancing ones on the NYSE by a 1.54-to-1 ratio; on Nasdaq, a 2.16-to-1 ratio favored decliners.

Volume on U.S. exchanges was 7.19 billion shares, compared to the 6.93 billion average for the full session over the last 20 trading days.