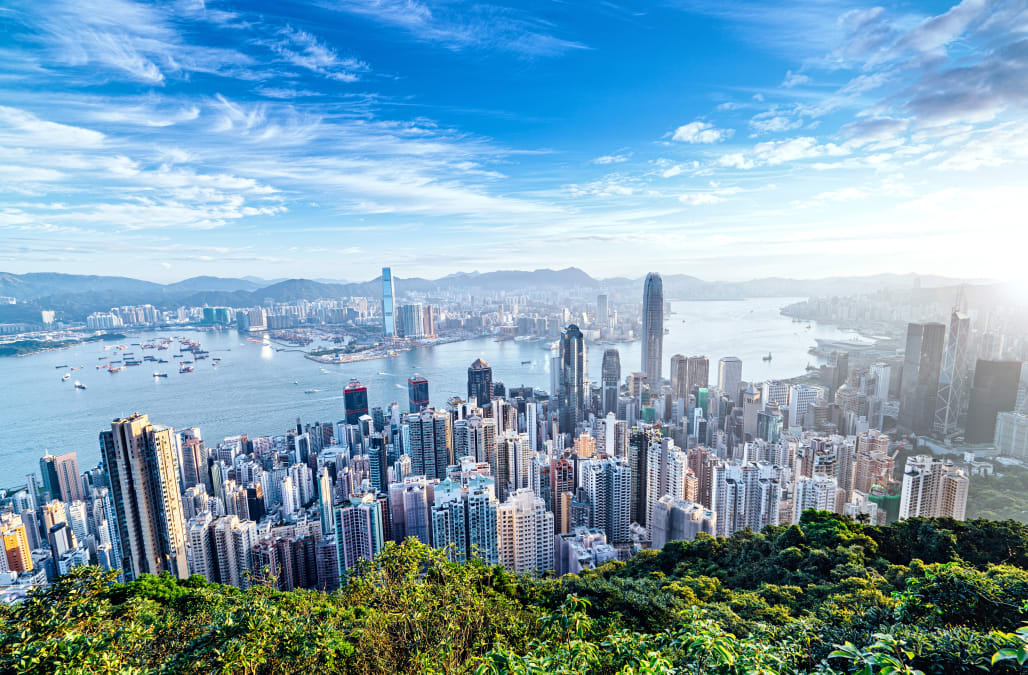 A mansion for sale in Hong Kong's exclusive and wealthy Peak neighborhood could break the record for the most expensive home sold in the territory — and possibly in all of Asia.

The $446 million home, which was built in 1991, went on the market in April 2018 and was available for lease before that, Joyce Lee, a representative for Christie's International Real Estate, told Business Insider.

Hong Kong, which is now home to more super-rich individuals than any other city in the world, is seeing property prices continuing to climb, particularly in the luxury market.

Christie's International Real Estate named Hong Kong the prime luxury market in the world for the second year in a row in its 2017 "Luxury Index" that evaluated growth and demand of premium real estate.

Hong Kong claimed the world's first and second most expensive home sales of 2017, according to the South China Morning Post, breaking several property records in the process, as Business Insider's Rosie Perper reported. An estate on The Peak was sold for $360 million to billionaire technology manufacturer Yeung Kin-man in January 2017, the South China Morning Post reported.

In November 2017, the most expensive apartments in Asia sold for a combined $149 million. And the city-state continues to break records in the luxury housing market in 2018.

In March 2018, a buyer paid $178.4 million, or $19,400 per square foot, for a mansion in Hong Kong's super-exclusive and wealthy Peak neighborhood, making it the most expensive residential sale in all of Asia, according to Bloomberg.

But this $446 million home could break even those staggering records. Here's a look inside the mansion and the exclusive, super-wealthy neighborhood where it sits.

The four-bedroom mansion sits on 7,725 square feet on Middle Gap Road, one of the most prestigious gated communities in Hong Kong, according to the real estate listing. The home is surrounded by dense woods.

The colonial-style home was built in 1991 and includes an outdoor swimming pool.

Views of the hilly, greenery-filled neighborhood surround the pool area.

Upon entering the home, you're greeted by plants and a light-filled entryway.

The kitchen is "fully fitted and equipped," according to the listing.

The home includes a separate living and dining area. It also has central air-conditioning.

Depending on which room of the house you're in, you can have a view of the sea to the south ...

... or the surrounding forest.

The home has four-and-a-half bathrooms.

The $446 million price tag for the home might seem mind-boggling if you're not aware that Hong Kong has the most expensive housing market in the world. A survey of 300 cities has named Hong Kong the least affordable housing market for eight years in a row.

It's rumored that Jack Ma, the Chinese billionaire who founded Alibaba, purchased a $191 million mansion in the neighborhood in 2015, but that has never been confirmed.

Its elevated location offers stunning views of Hong Kong's skyline as well as a relative respite from the sweaty streets of the city.

In the past 10 years, three of the Peak's streets — Pollock's Path, Barker Road, and Severn Road — have claimed the title of the world's most expensive street.

On the Peak, the supply of new luxury homes is extremely limited, Thomas Lam, head of valuation and consultancy at Knight Frank, told Bloomberg. "Prices for houses will grow further due to the limited supply," Lam told the South China Morning Post.

Hong Kong as a whole is in the midst of a housing crisis that forces tens of thousands of people to pay at least $180 a month to live in tiny "coffin homes."

A government task force has been trying to figure out how to make better use of Hong Kong's scarce land. Some options they're considering include creating pod homes out of concrete drainpipes, adding additional floors to skyscrapers, and even building artificial islands.

Hong Kong skyline and Victoria Harbour from the Peak