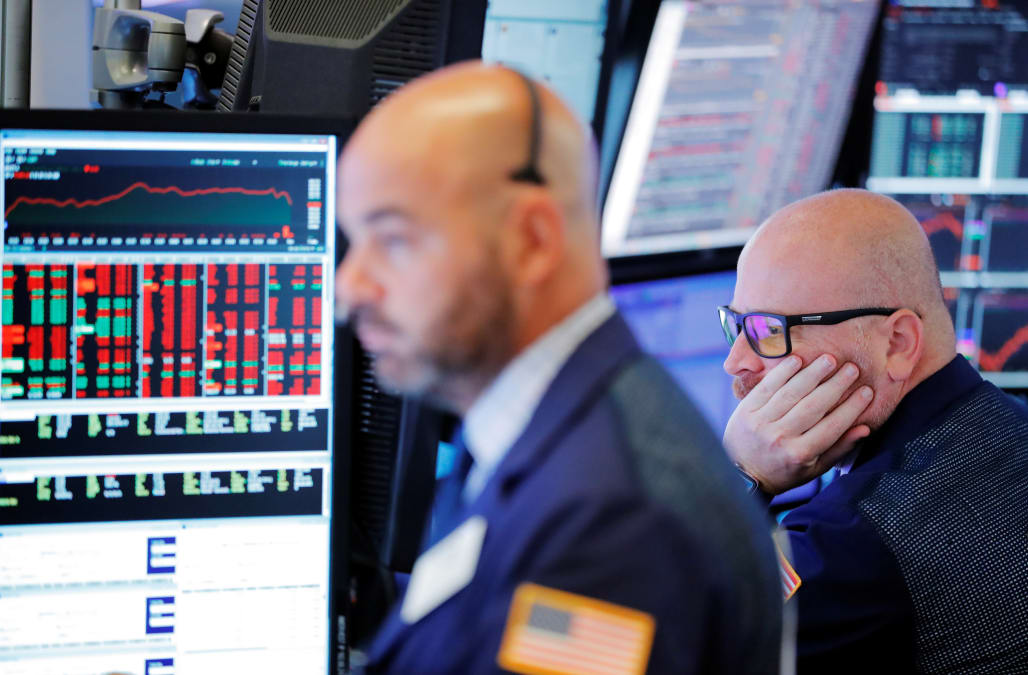 (Reuters) - U.S. stock markets were lower on Monday as technology names such as Apple and Amazon.com fell, bearing the brunt of expectations President Trump will make good on threats to set new tariffs on $200 billion of Chinese goods, and that Beijing will retaliate.

The upcoming tariffs will be on a list of items, announced in July, that included internet technology products, other electronics, printed circuit boards and consumer goods.

Seven of the 11 major S&P 500 sectors were lower, with a 0.75 percent drop in the consumer discretionary sector leading the declines, weighed by shares of Amazon that fell 2.2 percent.

RELATED: Chinese goods that will be hit by Trump's tariffs

Chinese goods that will be hit by Trump's tariffs
Bubbles form in lubricant oil inside a barrel at the Royal Dutch Shell Plc lubricants blending plant in Torzhok, Russia, on Wednesday, Feb. 7, 2018. The oil-price rally worked both ways for Royal Dutch Shell Plc as improved exploration and production lifted profit to a three-year high while refining and trading fell short of expectations as margins shrank. Photographer: Andrey Rudakov/Bloomberg via Getty Images
Cellophane packaging tape on background
Macro detail of container with CBD oil, cannabis live resin extraction isolated on white - medical marijuana concept
Warehouse industrial and logistics companies. Coiled plastic pipe.
LONDON, ENGLAND - NOVEMBER 20: Plastic plates on display in a cash and carry on November 20, 2017 in London, England. The Chancellor Philip Hammond is expected to announce a consultation into a possible tax on single-use plastics such as takeaway cartons in this week's Budget. (Photo by Jack Taylor/Getty Images)
Steel cables are used at a section of the Hong Kong-Zhuhai-Macau bridge in Zhuhai, China March 28, 2018. REUTERS/Bobby Yip
Continuously variable transmission metal parts close-up
discs of a modern agricultural aggregate for surface treatment of soil.
Agriculture - aerial view of harvest fields with tractor. Farmer preparing land with seedbed cultivator
OLYMPUS DIGITAL CAMERA
A thermometer is pictured on top of the highest German mountain, the Zugspitze, in Garmisch-Partenkirchen, Germany February 28, 2018. REUTERS/Michaela Rehle
Car Speedometer on dark background
Modern electric meter close up view
Up Next

The technology sector dropped 0.34 percent pressured by a 1.4 percent decline in shares of Apple.

Apple had earlier said tariffs could hit a "wide range" of its products.

A senior administration official told Reuters over the weekend that Trump was likely to announce the new tariffs as early as Monday while a widely read Chinese tabloid warned China would not be content to only play defense.

"Investors are slowly starting to realize that these new tariffs could be extremely disruptive to the supply chain," said Art Hogan, chief market strategist at B. Riley FBR in New York.

Twitter fell 4.3 percent, the most on the S&P, after brokerage MoffettNathanson flagged concerns over rising expenses.

Chipmaker Broadcom was last up 1.5 percent after brokerage Nomura upgraded its shares on expectations that the company would raise its dividend to $9 per share.

The S&P index recorded 24 new 52-week highs and no new lows, while the Nasdaq recorded 34 new highs and 28 new lows.

(Reporting by Shreyashi Sanyal in Bengaluru; editing by Patrick Graham and Shounak Dasgupta)

More from Aol.com:
Stocks roll over after Trump reportedly OK's additional tariffs on $200 billion worth of Chinese imports
Tobacco stocks are surging after the FDA threatens to pull flavored e-cigarettes
What boycott? Nike sales are up 31 percent