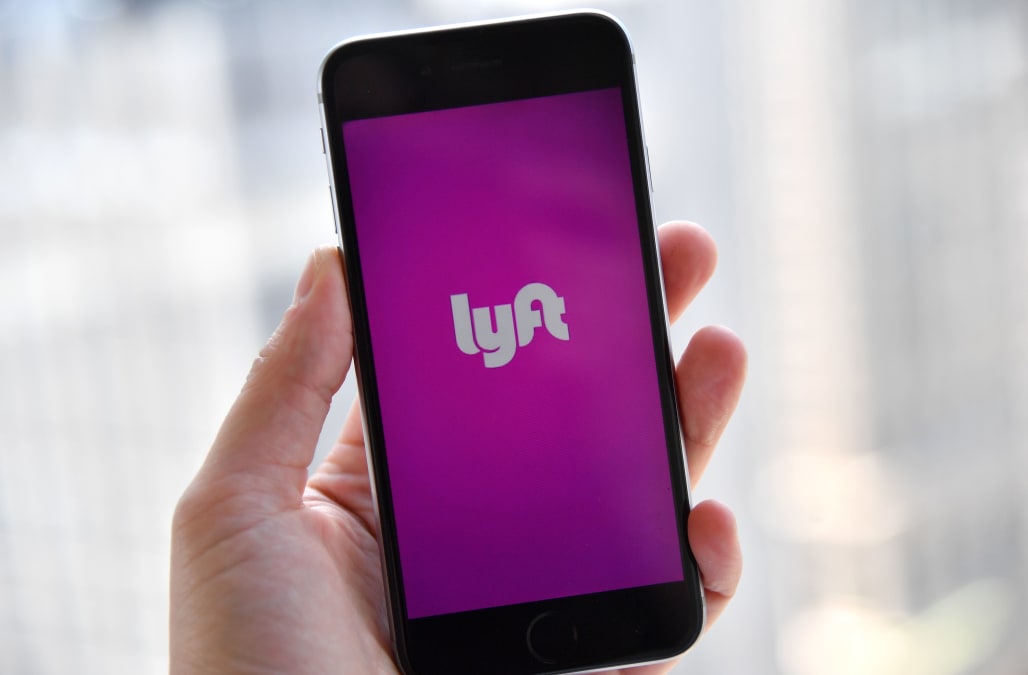 Ride-hailing company Lyft is celebrating a milestone of sorts this week: It has now given 5,000 public rides in prototype self-driving vehicles operated by high-tech auto-industry supplier Aptiv PLC (NYSE: APTV).

Lyft was very late to join the self-driving technology rush, and its own research and development effort is still in early stages. But thanks to Aptiv and -- soon, perhaps -- other partners, some of Lyft's customers aregetting a taste of the self-driving taxi experience. 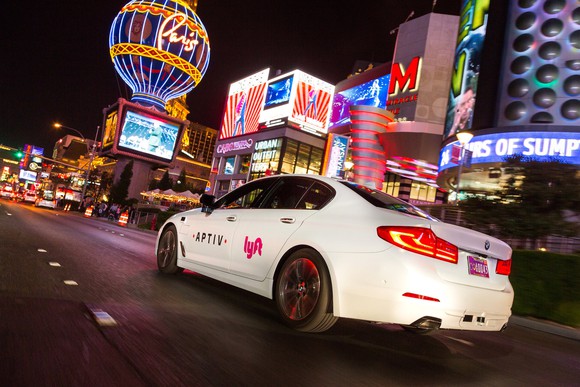 A fleet of robot BMW taxis is operating in Vegas

This pilot program began earlier this year, when Aptiv deployed a fleet of 30 BMW sedans fitted with its prototype self-driving system in Las Vegas and made them available via Lyft's ride-hailing platform.

These vehicles are prototypes, meaning that they're not empty when they arrive to pick up a rider: The cars have human drivers ready to take control if the self-driving system begins to go awry. But so far, they've been well-received by Lyft customers in Vegas. The average passenger rating for a self-driving Lyft ride is 4.96 out of a possible 5 stars, the company said, and 96% of the passengers say that they intend to ride in a self-driving Lyft again.

Who is Aptiv and how did it connect with Lyft?

Aptiv is the high-tech portion of the former giant auto supplier Delphi Automotive, which split itself in two last year. The company has been working with Intel (NASDAQ: INTC) and Intel's machine-vision subsidiary Mobileye on a self-driving system that they hope to begin offering to automakers by the end of next year. In a parallel effort, the three have also been working with German automaker BMW AG(NASDAQOTH: BAMXF) on a series of systems for vehicles that BMW is aiming to begin producing in 2021. (It's no coincidence that Aptiv's self-driving Lyft vehicles are BMWs.)

Delphi's self-driving effort got a big boost last October, when it acquired self-driving start-up nuTonomoy, a company formed by researchers from the Massachusetts Institute of Technology. A few months earlier, nuTonomy had signed a deal with Lyft to collaborate on a test of self-driving vehicles in Lyft service in Boston. (The nuTonomy team is part of Aptiv now.)

Why Lyft is looking to Aptiv (and others) for self-driving

Lyft's own self-driving technology program is thought to be far behind that of its larger rival, Uber Technologies -- and even farther behind the companies generally cited as the self-driving leaders, Alphabet's (NASDAQ: GOOG)(NASDAQ: GOOGL) Waymo and General Motors' (NYSE: GM) Cruise.

Waymo has already begun deploying its own self-driving taxi fleet, and Cruise is expected to follow within months. But while it works to catch up with the technology, it has come up with a workaround: Last year, it opened up its ride-hailing platform to a number of companies developing autonomous-vehicle systems, including nuTonomy, Ford Motor Company, and Jaguar Land Rover, which took a small stake in Lyft. 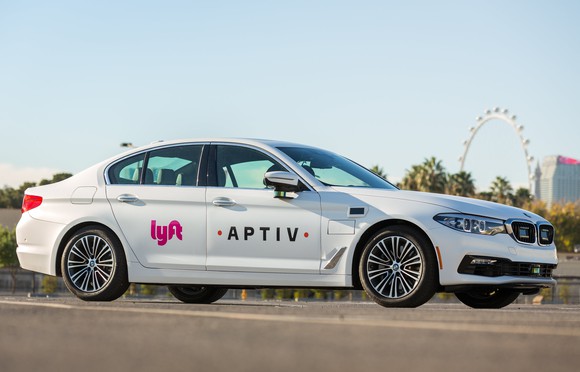 Note how well the self-driving sensors are integrated into this BMW. That level of integration suggests that this is a later-stage prototype. BMW has said that it plans to bring self-driving technology to market in 2021. Image source: Aptiv PLC.

What does it mean for investors interested in self-driving?

Self-driving vehicles have the potential to be a transformative technology, and the space has drawn tremendous interest from investors. But it's not easy to invest in "self-driving" right now. At the moment at least, there isn't really a "pure play" self-driving stock to buy. The closest thing we've seen so far was probably Mobileye -- but Intel acquired the company (at a hefty premium) early in 2017.

That has left investors searching for the next-best opportunities. If you're one of those investors, Aptiv probably deserves a closer look. Revenue and earnings have both grown solidly this year, and the company has so far shown a knack for bolting on acquisitions that help advance its technology.

And what of Lyft? If and when it goes public, Lyft is likely to show up on a lot of investors' take-a-closer-look lists. Much will depend on how well it stacks up against its more prominent rival, Uber, on many fronts -- including self-driving technology. But in its favor, Lyft has so far managed to put up good growth while avoiding the scandals that plagued Uber until last year. I suspect that it will have no trouble attracting interest -- and cash -- from investors.

10 stocks we like better than Aptiv PLC
When investing geniuses David and Tom Gardner have a stock tip, it can pay to listen. After all, the newsletter they have run for over a decade, Motley Fool Stock Advisor, has quadrupled the market.*

David and Tom just revealed what they believe are the 10 best stocks for investors to buy right now... and Aptiv PLC wasn't one of them! That's right -- they think these 10 stocks are even better buys.

More from The Motley Fool:
These 10 companies may file for bankruptcy in 2018
How many members does Netflix have?
3 big implications of the AT&T-Time Warner decision