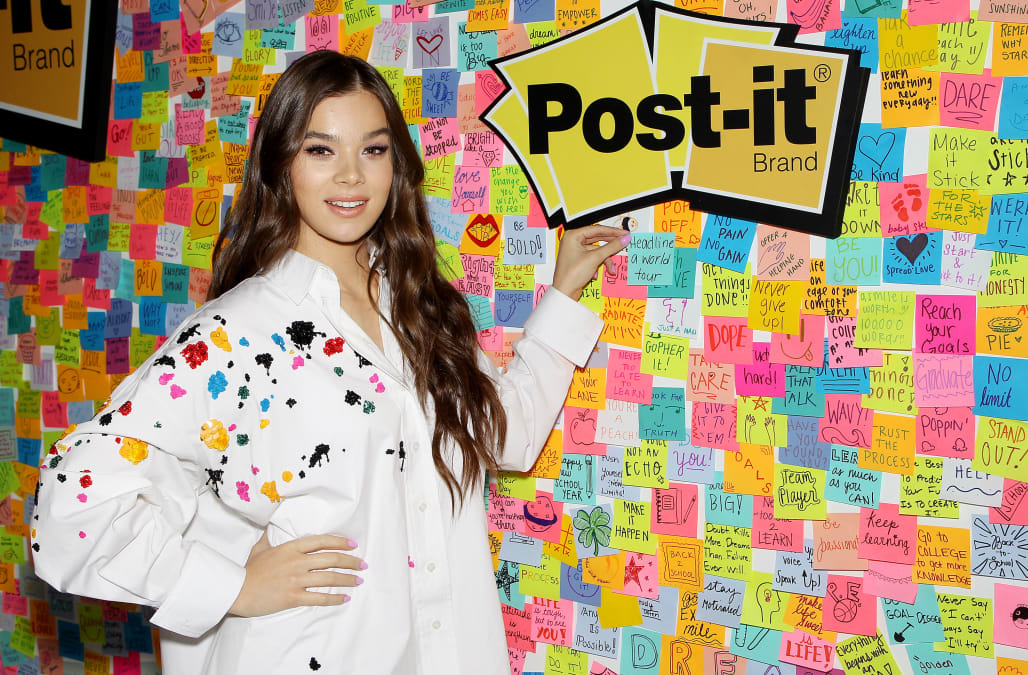 Back-to-school season is an exciting (yet sometimes scary) time for students and educators alike.

As anxiety-inducing as the unknown and the brand new can be, the chance to realign, restart and reset your goals and dreams at the beginning of each academic year is both liberating and thrilling — and what better way to visualize those then by physically writing them down and watching everything come to life?

Research reveals that we’re 42 percent more likely to achieve a goal if we tangibly write it down, something that rockstar actress and singer Hailee Steinfeld knows to be true:

“Writing in general is a form of expression … I could be on a plane or in a car or literally anywhere and I do not leave my house without Post-it Notes and a pen …  I have to write it down physically.

I have my phone on me at all times, but there’s something more satisfying about writing it down and if it’s ideas that I sort of find I’m inspired by through my travel, I write it down so that when I’m in the studio, I can reference back to it. I’m constantly writing.”

This year, Steinfeld is teaming up with Post-it Brand to “encourage students to dream big and write their goals down as they get ready for back-to-school. I’m a huge believer in writing everything down including my goals.”

This concept of visualizing what you yearn for, almost in a seeing-is-believing type manner, was put into action on July 23 when Steinfeld treated students from the NYC chapter of non-profit After School All Stars to a Q&A centered around goal-setting followed by an acoustic performance at NYC’s Bathhouse Studios.

Whatever Steinfeld is doing as far as goal-setting and dream-casting is clearly working — the 21-year-old is currently on a nationwide tour with musician Charlie Puth and set to star in the upcoming “Transformers” spinoff, “Bumblebee", alongside John Cena.

And though she always dreamed of making it in the industry, Steinfeld has always put her education and schooling first and foremost:

“School was always my first priority and everything else came after that. When I graduated high school, I made the decision that this is the time in my life that I can figure out what I want to do with myself and figure out who I am. I had already been working a ton up until that point, and so I decided to take a couple years off and focus on my work. And you know, there were people that were supportive and people that weren’t. But I am so happy and I’m so thankful that I’ve been able to do what I’m doing.”

It’s hard to look at Steinfeld and her portfolio of work — from cuttingly relatable lyrics to complex, coming-of-age characters played on-screen — and ever imagine that she’s had a moment of doubt about who she is and what she was meant to do.

She oozes confidence, but not in an in-your-face type of way -- rather, in a grounded and collected manner.

It's something that positions her as a role model and example for young girls and teens alike, whether it would have been a real-life role she chose or not.

One movie role Steinfeld did choose, however, was playing Nadine in 2016's "Edge of Seventeen", where she plays a high-school junior going through just about every up and down we’ve all felt at one point or another.

Steinfeld addresses all of what it means to be a teenager muddling through high school -- the awkwardness, the ambiguity, the irritation and the gut-wrenching question of ‘Where on earth do I fit in?”

It’s roles like these that have helped Steinfeld make sense of her own experiences growing up while simultaneously putting her in a position where awkward-stage-aged tweens and teens everywhere can have someone to relate to when it comes to gearing up for another year of school:

“I especially loved playing [Nadine] because I felt like it was an opportunity for me to fully express every bit of angst and built up anxiety and confusion and frustration. I could let it all out within that one character. And that’s what made her so incredible, was there were so many layers to her. She had a sense of humor about a lot of things, but there was a deeper, darker side to her real feelings on certain situations and it allowed me to ‘freak out’ and scream and yell and shout and then laugh and have fun. It allowed me to sort of discover my inner Nadine through playing her. So it was really special. I feel like having played that character [helped] connect me with so many people who were impacted by her.”

Being able to have those ‘freak out’ moments are necessary to finding yourself through school, adolescence and beyond.

But to Steinfeld, keeping a future-focused mindset is perhaps the most key of all:

“A new school year is the perfect fresh start. It’s a great time in your life to set new goals and write them down and prioritize what you want to achieve. Have fun with it, enjoy it … you go and you learn and you ask questions and yeah, it’s a good time.”

More from Aol.com:
Reddit co-founder Alexis Ohanian teams up with 1850 Brand Coffee to find America's next big entrepreneur
Common gets candid about the education system, the current administration and his secret for staying so admirably positive all the time
These three women of Tito's Handmade Vodka are completely disrupting the spirits industry -- and they're using 'love' as their secret recipe