UBS: Online food delivery could be a $365 billion industry by 2030 — here are the winners and losers from that 'mega trend' 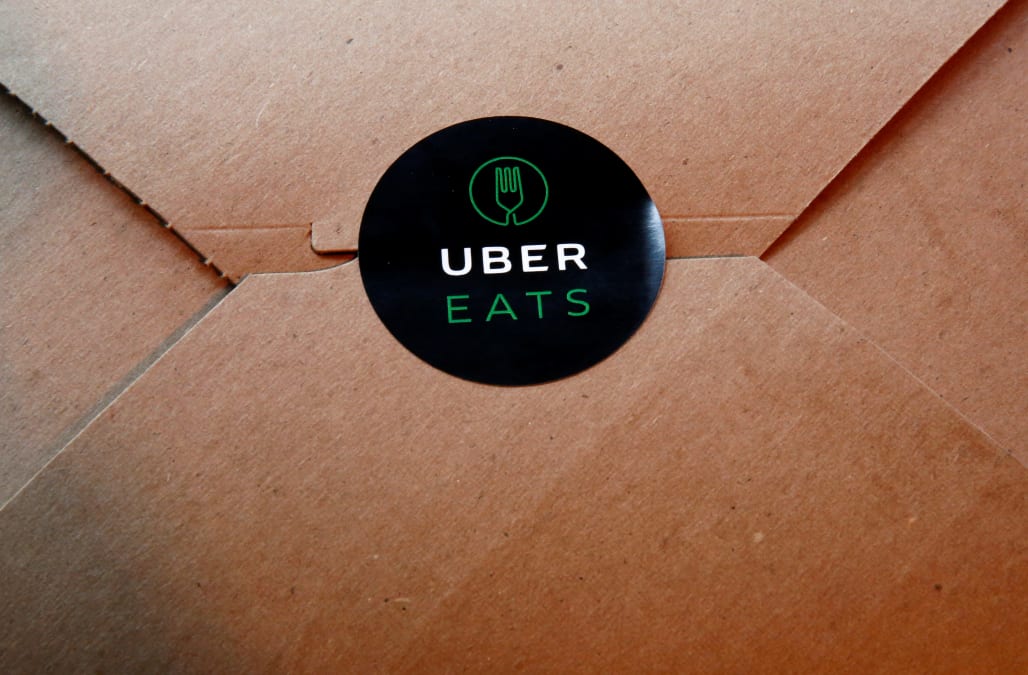 LONDON — UBS thinks the online food delivery market could grow by 10 times in the next 12 years as meal kits and takeout apps like UberEATS and Deliveroo become more ubiquitous.

Leon — a European fast food chain that's coming to the US

Launched in 2004, Leon now has almost 50 restaurants in the United Kindom and Netherlands. After a $31 million funding boost in 2017, the company announced it will expand to the US market.

Leon founders John Vincent, Henry Dimbleby, and Allegra McEvedy have said that their long-term goal is to become more valuable than McDonald's.

Salad and Go sells 48-ounce salads for around $6, as well as soups, smoothies, and breakfast items for around $4.

Since launching in the fall of 2016, Salad and Go now has six locations in Arizona, with plans to open eight more by 2018 and to expand elsewhere in the US by 2020.

While the chain doesn't explicitly brand itself as healthy, everything on the menu contains less than 600 calories and 1,000 mg of sodium, and the dishes are free of high-fructose corn syrup, butter, cream, trans fats, MSG, and preservatives. Most items cost less than $10.

As noted by First We Feast, LYFE is backed by Art Smith, Oprah’s former personal chef, who has also appeared on "Top Chef."

The vegan chain Veggie Grill serves burgers primarily made of pea protein, while its "chicken" sandwiches contain soy, pea, and wheat protein. Prices range from $3.50 to $11.50.

The chain has 28 locations, all of which are in California, Washington, and Oregon. In late 2016, the chain announced it will expand nationally after getting $22 million in funding from investors. By 2020, Veggie Grill plans to double in size.

"Today’s consumer is more mindful and aware that eating a diet made up primarily of veggies, fruits, grains and nuts is better for you," CEO Steve Heeley told Business Insider. (Unsurprisingly, Heeley is a vegan himself.)

At the vegetarian chain Eatsa, customers place their orders on iPads and pick up their food from automated cubbies. Human workers prepare everything in the back.

Specializing in quinoa bowls that cost around $7, the chain's meals range from 450 to 700 calories.

Currently, Eatsa (which debuted in 2015) has four locations in San Francisco and Los Angeles. In November 2016, it added a DC location and opened its first New York City location in December.

With a menu that emphasizes locally sourced vegetables, Dig Inn offers items like maple and sriracha-glazed Brussels sprouts and poached wild salmon. Diners order pre-made main dishes and sides at a counter, which are placed in compostable boxes.

Since its launch in 2011, the farm-to-table chain has opened 14 locations in New York City and one in Boston. Dig Inn's CEO Adam Eskin told BI that the company plans to open more Massachusetts locations and add others in a third state by 2018.

Dig Inn forms partnerships with local farmers, which allows it to keep its prices relatively low, Eskin said. However, a plate from Dig Inn generally costs between $8-$11, which is more expensive than most food from McDonald's or Burger King. (However in New York City, where real estate prices are among the highest in the country, a McDonald's Big Mac meal costs around $8.)

In August 2016, Kimbal Musk (yes, he's Elon's brother) launched a fast food restaurant that serves sandwiches, soups, and salads — the majority of which cost $4.95. Called the Kitchenette, it's located inside the visitor's center at Shelby Farms Park, a 4,500-acre urban park and conservancy in Memphis, Tennessee.

The grab-and-go spot is part of Musk's larger chain of restaurants, called the Kitchen, which strives to use produce and meat from local purveyors. Musk plans to launch more Kitchenette locations within Memphis and eventually nationwide, though there's no firm timeline yet.

Freshii — A plant-based chain that's been around for 10 years

Freshii, a Canadian fast food franchise founded in 2005, offers salads, wraps, and bowls, the majority of which are under 700 calories and cost $7. It boasts more than 300 locations worldwide and is one of America's most popular healthy fast food chains. In the past few years, new locations have opened inside airports, stadiums, and Target stores.

In 2015, after McDonald's announced its menu improvements, Freshii's CEO Matthew Corrin sent an open letter to McDonald's, in which he offered to partner with the fast-food giant and pushed the chain to serve healthier food.

Everytable, which launched its first Los Angeles location in 2016, adjusts its prices depending on what its local customers can afford.

The South LA location (where households earn a median salary of $30,882), for example, offers salads and bowls for less than $4.50. In early 2017, Everytable opened a second location in downtown LA (where the median salary is $99,990), which offers the same items for around $8. Both stores' ingredients will be sourced from local purveyors, but the idea is that sales in wealthier neighborhoods can partially subsidize operations in lower-income areas.

Everytable's cofounders, Sam Polk and David Foster, told BI they plan to expand the chain to more LA neighborhoods and eventually to other cities around the US.

LocoL — A California eatery where everything costs $6 or less

The chain's dishes contain more calories than, say, a salad, but everything is made with high-quality, locally sourced, whole ingredients. In LocoL's cheeseburgers, for example, cooked grains and tofu make up 30% of the beef patties. Its chicken nuggets also contain fermented barley. Instead of soda, fruity aguas frescas are made in-house every day.

The chain, which launched in 2016, currently has three permanent locations and an array of food trucks in Los Angeles. In coming years, Choi and Patterson hope to have nine locations nationwide, including a coffee shop and a kitchen where their staff can prepare the trucks' food off-site, according to Eater.

If you're in LA and inkling for a cheeseburger, LocoL's $4 one is served as quickly as McDonald's, is better for the environment, and according to First We Feast, tastes great.

"There could be a scenario where by 2030 most meals currently cooked at home are instead ordered online and delivered from either restaurants or central kitchens," UBS' Evidence Lab team said. "The ramifications for the food retail, food producer and restaurant industries could be material, as well as the impact on property markets, home appliances and robotics."

UBS estimates that the global online food ordering marketplace is currently worth $35 billion, comprising of: online grocery delivery services such as Ocado in the UK and Instacart in the US; meal kit deliveries, such as HelloFresh and Blue Apron; and online takeaway portals, such as Just Eat, Grubhub, UberEATS, and Deliveroo.

After surveying 13,000 consumers globally and analysing 350 apps from around the world, UBS said that its base case for the industry is that gross merchandise volume rises to "US$365bn, implying a 20% GMV CAGR for the online food delivery sector to 2030."

"In a world of increasingly time-starved and asset-light consumers, online food delivery is part of a mega-trend, combining the on-demand and sharing economies," the Evidence Lab team said.

UBS says that listed online takeaway services such as Just Eat and DeliveryHero are a good bet for investors looking to take advantage of this trend. Amazon, which acquired Whole Foods last year as part of its digital grocery strategy, is also a good bet.

Catering companies like Compass and Sodexo are threatened by this "mega-trend" meanwhile, although UBS remains neutral on both stocks. Bernstein made a similar point about Compass and Sodexo in May, warning that the rise of online takeaway could threaten staff canteens.

The predicted growth in online food delivery could be a negative for some food producers and property businesses, UBS said. Ready meal producers such as General Mills and Kraft-Heinz could suffer, while mall operators — already under pressure from the shift of general retail online — could face further problems if food courts decline in popularity.

Despite its provocative title, UBS stops short of predicting the death of the kitchen in the near-term, although it says this could be possible if the shift to online is quicker than its base case suggests. Household appliance manufacturers such Robam could suffer if the kitchen does start to decline in prominence, UBS said.

The Evidence Lab team also said that the decline or even death of kitchens in houses is likely over the longer term.

"For skeptics, consider the analogy of sewing and clothes production," UBS wrote. "A century ago, many families in now-developed markets produced their own clothes. It was in some ways another household chore. The cost of purchasing pre-made clothes from merchants was prohibitively expensive for most, and the skills to produce clothing existed at home.

"Industrialisation increased production capacity, and costs fell. Supply chains were established and mass consumption followed," the team said. "Some of the same characteristics are at play here: we could be at the first stage of industrialising meal production and delivery."

NOW WATCH: NYU Stern professor on what many people get wrong about sustainability: It's not just about the environment and it actually leads to better financial performance