The most affordable travel destinations in the US – 2018 edition 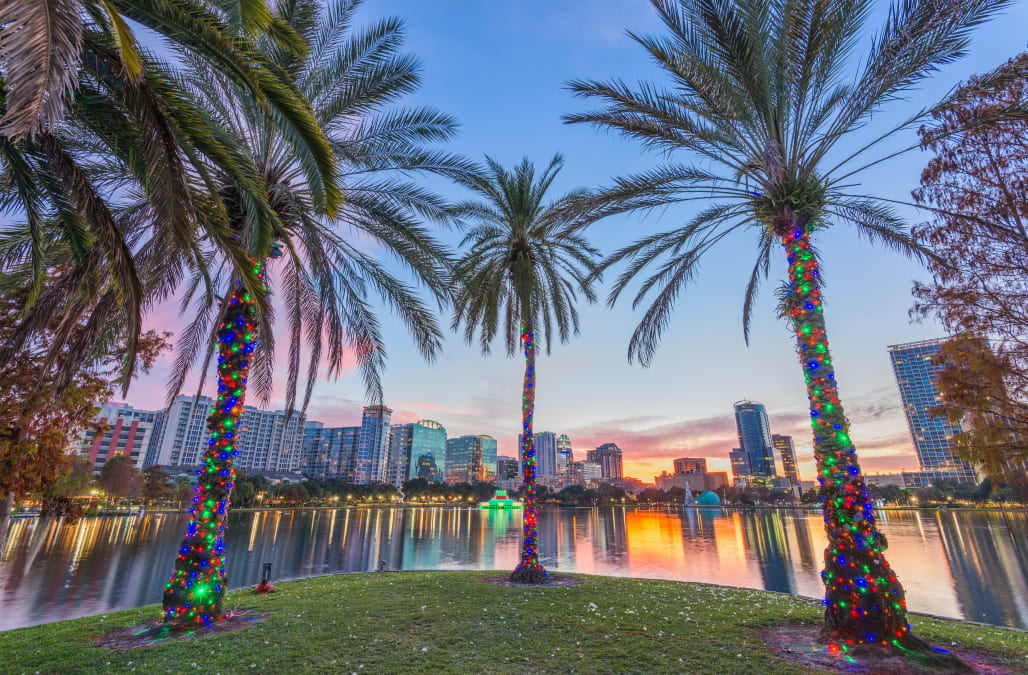 With summer starting to heat up it’s time for families to start planning their summer vacations. This can be a stressful period, especially for families whose budgets are already stretched trying to afford their mortgage and saving for retirement. But while a dream trip to a distant country may be off the table, there are plenty of affordable U.S. destinations which families can enjoy without breaking their savings accounts. Below we rank the most affordable U.S. travel destinations.

In order to find the most affordable travel destinations in the country, SmartAsset estimated the costs of a vacation for a family of four and for an individual. Specifically, we looked at the cost of hotels, flights, car rentals and meals for a family of four and an individual in 48 cities. Check out our data and methodology below to see where we got our data and how we put it together.

This is the fourth annual version of this study. Check out the 2017 version here.

11 PHOTOS
Most affordable travel destinations in the US
See Gallery

Most affordable travel destinations in the US

Salt Lake City takes the final spot. We estimate that a family of four can expect to pay $2,790 on a vacation here. That is only $5 shy of Dallas. For an individual, on the other hand, Salt Lake City is actually a more affordable trip than Dallas. The reason for the disparity is the high cost of airfare to Salt Lake City. You don’t get a family discount when buying tickets and the average round-trip flight to Salt Lake City costs $350.

Salt Lake City is perhaps better known as place to visit in the winter, thanks to all the wonderful skiing. But all these hills and mountains that make Salt Lake City such a wonderful place to ski also make it a wonderful pace to hike. Plus, hiking is more budget-friendly vacation option than skiing.

Dallas takes the ninth spot, falling about $100 short of Tampa in eighth. According to our data, Dallas has the third-highest average car rental costs in our top 10 and the second-highest average hotel costs. Food on the other hand is pretty affordable. A meal at a mid-range restaurants should cost no more than $19, on average.

If you are a history buff, the Sixth Floor Museum at Dealey Plaza highlights the life and death of President John F. Kennedy and would be a great addition to any vacation itinerary. For a day of nature and relaxation, try the Dallas Arboretum and Botanical Gardens.

Florida cities score well on this list. The final Florida city to crack our top 10 is Tampa. We estimate the total cost of a vacation in Tampa for a family of four would cost $2,689. For an individual, that same trip would cost $933. What makes Tampa so affordable is the competitive airfare. The average round-trip flight to Tampa costs only $306.

San Antonio is the seventh-most affordable travel destination for families, according to our data. Flights to this city are fairly expensive, our data shows the average round-trip flight to San Antonio costs $359. However in the other metrics San Antonio shines, especially in the food category. If you are someone who enjoying indulging on vacation, San Antonio is a good place to go. The average meal at a mid-tier restaurant costs just $13.

For visitors wondering what to do in San Antonio, a walk along the San Antonio River through the city is never dull. And remember, the Alamo is San Antonio’s most visited landmark and is well worth including in any trip.

Arizona’s capital comes in sixth. As a travel destination, this city ranks in the top 10 for three out of four metrics. In total we estimate that a family of four could expect to pay $2,626 for a three-day, three-night vacation in Phoenix. The biggest hit to the family budget will be airfare. The average round-trip flight to Phoenix costs $327, according to Bureau of Transportation estimates. An individual making the same trip could expect to spend $923, on average.

Of course, fans of desert environments will find Phoenix is a wonderful place to visit. Phoenix is home to the Desert Botanical Garden which has over 21,000 plants, including 139 rare, threatened or endangered species. And don’t miss the great hikes. Papago Park, Camelback Mountain and South Mountain Park are all within driving distance of downtown Phoenix.

For the fourth straight year, Albuquerque is a top 10 affordable travel destination. Albuquerque ranks well thanks to affordable lodging and food. A night in the average hotel in Albuquerque will only cost $95 and a meal at an average mid-tier restaurant costs $18. However the travel portion of any trip to Albuquerque will be slightly pricey. In both car rental costs and average air fare, the city ranks in the middle of the pack.

Albuquerque is an even better spot to visit if you live within driving distance. By driving here, a family or individual could cut out the car rental and airfare costs, which are the most expensive parts of a vacation to Albuquerque.

Another Nevada city takes fourth. Reno might make more sense for an individual traveler than for a family, at least judging by affordability. The city ranks third for the cost of a vacation for an individual and fourth for the cost of a vacation for a four-person family. Notable highlights for Reno include affordable hotels and meals. According to our data, the average meal at a mid-tier restaurant here costs about $19, while a night in a hotel will set you back $101 on average.

Like in Las Vegas, Reno has some interesting casinos which may be worth checking out like the Silver Legacy Resort & Casino. Car lovers will also enjoy coming to Reno. It is home to the National Automobile Museum which has over 220 classic cars on display.

Our top three remain the same from last year. In third, once again, is Fort Lauderdale. Getting to and getting around this city is affordable, according to our research. This city has the fifth-lowest car rental costs and second-lowest average round-trip airfare costs. What makes Fort Lauderdale fall behind Orlando and Las Vegas are the meal and hotel costs. In both of those metrics, Fort Lauderdale ranks in the middle of the pack.

This is a great city for people looking to experience nature. Fort Lauderdale sits right next to the Everglades and offers visitors a once-in-a-lifetime opportunity to see wild alligators.

Las Vegas repeats last year’s second place finish again this year. Sin City ranks so well because of the affordable flights. According to our data, the average round-trip flight to Las Vegas costs under $234. For that metric, Las Vegas ranks first.

In total we estimate that a single traveler spending three nights in Las Vegas could expect to pay nearly $857, while a family of four making the same trip would need to budget $2,308.

For the third year in a row, Orlando is the most affordable travel destination. We estimate that an individual traveler could expect to pay just under $800 for their weekend trip to Orlando, while a family of four would be facing a cost of just over $2,225. Across all the metrics, Orlando is an affordable place to visit. It ranks no worse than sixth in any category. One metric that helps families is the falling cost of airfare. The average plane ticket is around $4 less than last year.

As the home of Disney World, this city is especially enticing for young families but there are other great vacation options unrelated to theme parks. For example, the Kennedy Space Center would be a great place to visit for a family with a budding astronaut in their ranks.

The Most Affordable Places to Travel for Individuals 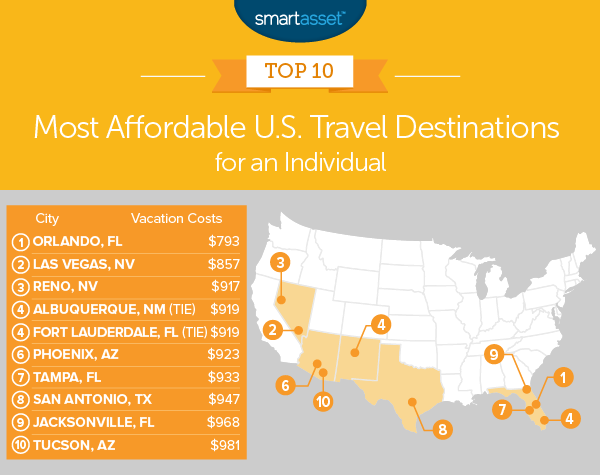 The reason for the disparity between this city’s family ranking and individual ranking are the expensive flights. Jacksonville ranks in the top 20 for three of our metrics, but 40th for average air fare. Those flight tickets hurt a family of four more than an individual.

Tucson, Arizona lost a close fight with Salt Lake City for the final spot in the top 10 most affordable travel destinations for families. But it did claim a top 10 spot as an affordable destination for individuals. We estimate that a three-day, three-night trip to Tucson would cost $981 for an individual and $2,798 for a family of four. 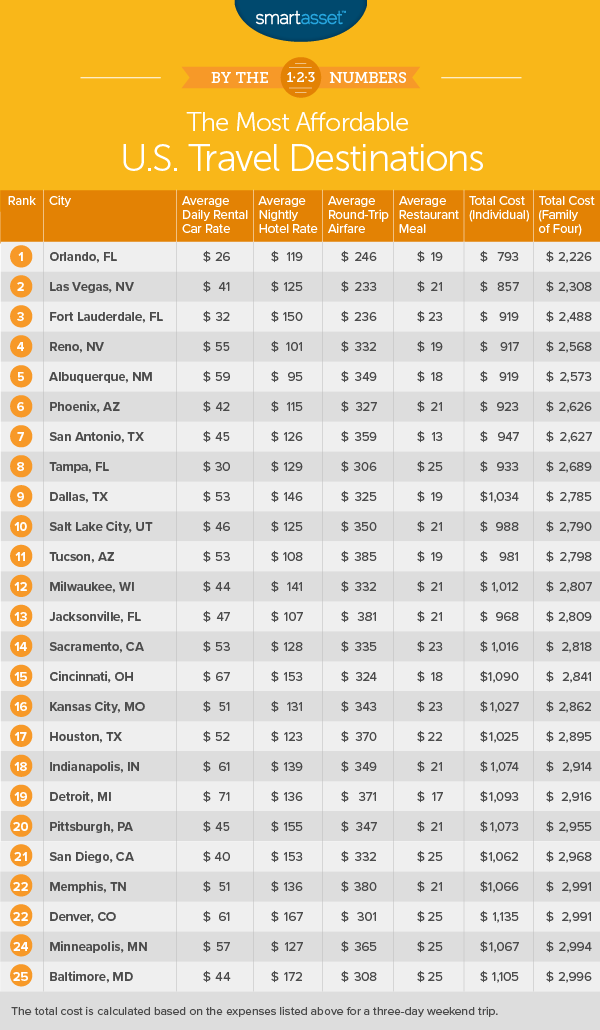 In order to find the most affordable travel destinations in America, we analyzed data for 48 of the largest cities in America. Specifically, we estimated the cost of a three-day, three-night vacation for a family of four and an individual. In order to estimate these costs we looked at the following four metrics:

More formally, we used the following equation to estimate the expected cost of a three-day, three-night vacation for a family of four:

This is the formula for a single traveler:

Tips for Making the Most of Your Savings

The post The Most Affordable Travel Destinations in the U.S. – 2018 Edition appeared first on SmartAsset Blog.

More from SmartAsset:
The worst airports to fly out of during the holidays - 2017 edition
50/30/20 budget and how to use it
What Americans in the biggest cities spend the most on