20 states where you can actually afford a mansion 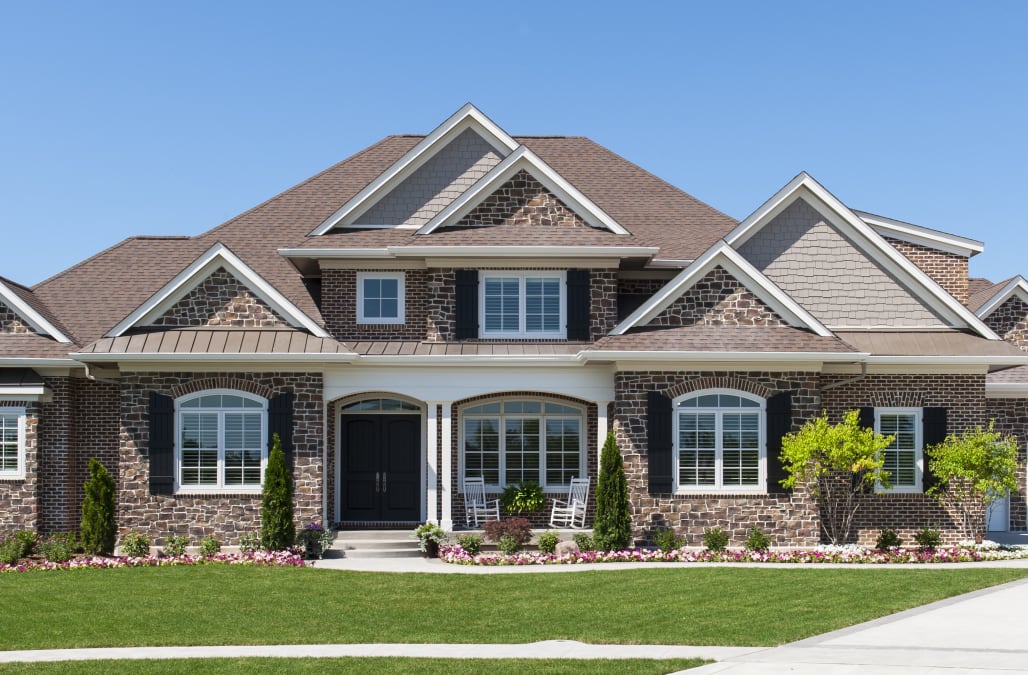 Mansions are defined by the National Association of Realtors as residences with more than 8,000 square feet of floor space. Want one? Well, where you live has a lot to do with whether you can afford to live big. In fact, you can own a bona fide mansion for less than a million bucks in much of the country.

GOBankingRates compiled a list of states where mansions cost the least by examining the state median price per square foot, according to Realtor.com. Click through to discover the best states to live for high-end homeowners on a budget.

20 states where you can actually afford a mansion

The price of living in a mansion in Alaska is less than $85 per square foot. There are, however, few other financial perks to the largest state in America.

For example, the cost of living there is nearly 32 percent above the national average. The good news for homeowners — even mansion owners — is that it's one of the places where it's cheaper to own a home than to rent, according to a GOBankingRates study.

The cost of living in Iowa is significantly lower than the national average. That's largely thanks to cheap housing — home costs are nearly 19 percent lower there than in the nation as a whole. That pattern holds true even for the state's elite — you can live comfortably in the state's most expensive ZIP code for less than $75,000.

As one of the best states to live if you're looking for a cheap mansion, North Carolina doesn't only allow the wealthy to stretch their dollars further. Median housing costs are 18 percent lower than the national average. The same can't be said, however, for the ritzy area of Wrightsville Beach, which is the most expensive ZIP code in the state. To live there, you need to earn $136,230 per year.

If you have a few hundred thousand more to spare, a recent GOBankingRates study found you can score four bedrooms and eight bathrooms sitting on 5 acres in a Raleigh metro town like Angier for less than $1 million.

Rounding out the bottom five is Oklahoma, where the cost of living is 11 percent below the national average. Looking to live in the high-end section of Tulsa, Okla., the most expensive ZIP code in the state? It costs $73,059 to live there comfortably, according to a GOBankingRates study.

In Louisiana, you can have a mansion of your own for less than $650,000. Louisianans pay lower housing costs, in general — as well as low costs for child care, transportation and utilities. The problem, however, is that health insurance premiums are high compared to the country as a whole, and median household incomes are low, according to a GOBankingRates study on the best and worst states for families to live a richer life.

The most well-heeled Ohioans need just shy of $92,000 to live comfortably — but that's in the state's most expensive ZIP code, in Terrace Park. For the rest of the state, the cost of housing — as well as groceries and health insurance — is fairly low compared to the nation as a whole.

The city of Columbus is one of the country's hottest housing markets, according to Realtor.com. Regular Ohioans earning the state's median income of $45,659 would have to work 35.52 hours per week just to afford the monthly mortgage on a home in the city's median price range, a GOBankingRates study found.

In Missouri, housing costs less than $80 per square foot — and those low costs are passed on to the elite who hang their hats in mansions. It's a state of extremes. The cost of living overall is 9.2 percent cheaper than the national average and housing is nearly 25 percent less.

The affluent, however, are richer than the wealthy in many other states. You need to earn nearly $127,000 per year to live comfortably in the state's priciest ZIP code.

If you're considering buying a mansion in Kansas City, do it fast. With a 14.77 percent year-over-year increase compared to 2016, it's one of the top 20 cities in the country where home prices are rising the fastest.

The cost of living in New Mexico is lower than the national average, but you'll still need more than $600,000 if you want to tell your friends you own a mansion — and considering that it's still more expensive to rent in the state, owning is definitely the way to go.

Things get especially pricey in the most expensive part of Santa Fe. That's the priciest ZIP code in the entire state. If you want to live there, you'll have to earn nearly $108,000.

Kentucky is the last state in the bottom 20 and the first state on this list where you can get yourself a mansion for less than $600,000. Housing is cheap across the state, as are child care expenses and the cost of groceries. The most you'll need to earn to be comfortable is $77,980 — and that's if you want to live in the high-end part of Prospect, which is the most expensive ZIP code in the state.

Just squeezing into the top 10 is Kansas, which claims one of the lowest median home prices in the entire country. The cost of living is 9.6 percent lower in Kansas than in the country as a whole. In fact, $90,680 is enough to live a nice life in the tiny section of Leawood, which is the most expensive ZIP code in the state.

In Wisconsin, housing costs are nearly 11 percent cheaper than the national average — and mansions are no exception. If you have the means, Wisconsin is a good place to live. Schools are good, unemployment is low, and health insurance is cheap, making it one of the top places to live a richer life. The most expensive ZIP code is in the swankiest section of the city of Madison. You can enjoy life there if you earn $98,000 a year.

Michiganders enjoy a cost of living that's nearly 12 percent lower than the national average. The most expensive ZIP code in the state is in Bloomfield Hills. If you're considering building your mansion there, you're going to have to earn $93,126 to live comfortably.

If mansions are fairly cheap in Tennessee, that's probably because the cost of living, in general, is inexpensive — more than 10 percent cheaper than the national average, in fact. The Volunteer State is the first on this list that can boast a per-square-foot cost of less than $70.

Want to build your mansion in the priciest part of the state? You'll have to earn more than $106,000 per year to get by in the high-end part of Nashville. Proceed with caution, though: Tennessee's hot housing market might be showing signs of a real estate bubble.

You'd have to make just shy of six figures to get by in the most expensive ZIP code in Alabama, which is in the most desirable section of Fairhope. That's far more than the state's median household income of $43,623. For most residents, however, the cost of living is low — nearly 9 percent lower than the national average, in fact.

Rounding out the top five states with the most affordable mansions is West Virginia, where housing costs are 9 percent lower than homeowners in the rest of the country can expect to pay. The median household income in the state is $41,751, and if high-end West Virginians want to bump up to first class, they can afford a spot in the swankiest section of Charleston — the priciest neighborhood in the state — on an annual income of roughly $20,000 more.

Indiana is one of the cheapest places to live in the country. Residents there enjoy a low cost of living that is 12 percent below the national average. A large part of the reason is health insurance. Not only is it comparatively cheap, but a high percentage of employers cover a good chunk of their workers' premiums.

The most expensive area in the state is the posh section of Zionsville, which can be yours if you earn an income of $76,828. If you only have $300,000 to spend on a home, no state in America gives you more bang for your buck than Indiana, a GOBankingRates study found.

Mansions are more affordable in South Dakota than they are in all but two other states, which is surprising considering that housing costs are considerably higher there than they are in the country as a whole. The total cost of living in the state is just slightly higher than the national average. Furthermore, South Dakota has no income tax and a low sales tax.

When it comes to total cost of living, Mississippi is the cheapest state in the entire country. In fact, Mississippi's elite can make it in the state's most expensive ZIP code, in Madison, on less than $67,000 a year. Residents enjoy cheap child care, groceries and health insurance. The tradeoff is that schools rank close to the bottom of the 50-state list and household incomes are low.

If you're looking for a mansion on a budget, Arkansas is the place to be. It's not just home prices, however, that make the state attractive to homeowners who want more for less. Healthcare in the state is cheaper than the national average, as is transportation. In fact, you can get by in the priciest ZIP code on an income of $75,524.

Next Up: You Won't Believe How Wealthy These Cities Really Are

This article originally appeared on GOBankingRates.com: You Might Actually Be Able to Afford a Mansion in These 20 States

More from Go Banking Rates:
The world’s most expensive countries to live in
Most and least expensive states to build a home
20 real islands for sale right now