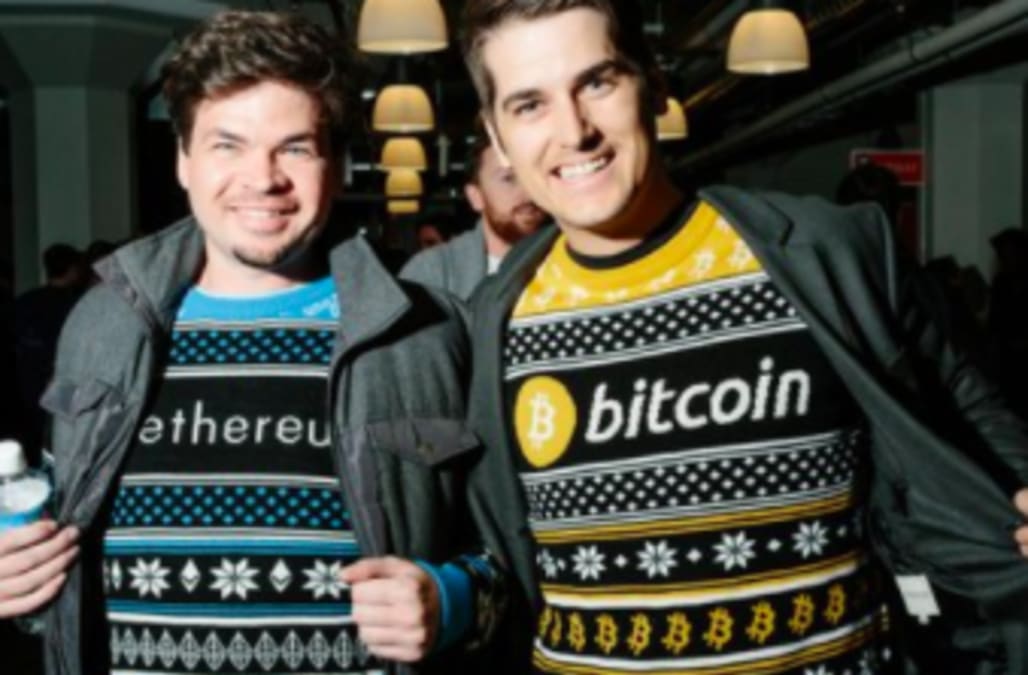 You might have guessed that the business at UglyChristmasSweater.com is seasonal, but there's one garment that's keeping the fashion faux pas in style year-round.

Fully-knit sweaters emblazoned with the logos of popular digital currencies, including bitcoin, Ethereum, and Litecoin — known as "ugly crypto sweaters" — are sweeping the online crypto community. Their maker, Hodlmoon, a spinoff of UglyChristmasSweater.com, sold more than 2,000 sweaters in 2017.

Long after the holiday office parties ended, crypto investors are still sharing photos of the garment on Twitter.

I'm starting to get tired of the seemingly never ending snow... The upside however: It doesn't feel too weird to keep wearing @hodlmoon's cozy crypto sweaters ❄️ #ethereum#lookofthedaypic.twitter.com/NIFpRuzCuZ

We talked to the sweater's creator to learn how the unofficial crypto-uniform came to be.

Zac Cohen, a web developer at UglyChristmasSweater.com, said he got the idea for bitcoin-themed sweaters after he turned a $100 investment in bitcoin into $5,000, as the price per coin soared. He bought one bitcoin in 2013, because he said the basic math behind it made sense to him.

Like gold, bitcoin has a limited and finite supply. Because there will only ever be 21 million coins, people buy bitcoin with the expectation that its value will increase as supply decreases.

He watched the price per coin rise steadily until last summer, when bitcoin began to gain hundreds of dollars in value by the day. Suddenly, bitcoin was everywhere, he said. Bullish investors and mainstream media attention ensured that pretty much everyone heard about bitcoin. A buying frenzy around the digital currency ensued, sending the price sky-high.

Cohen saw a business opportunity for UglyChristmasSweater.com in the chaos. He pitched the idea of ugly bitcoin-themed sweaters to the company's owners, brothers Fred and Mark Hajjar.

The unofficial uniform for bitcoin boosters

The Hajjars gave Cohen creative control over a spinoff company that specializes in fully-knit sweaters emblazoned with the logos of popular cryptocurrencies, including Ethereum and Litecoin. They called it Hodlmoon.

("Hodl" means to stay invested in cryptocurrency and resist selling when the price slides. If an investor holds, their investment might spike in value "to the moon," as the saying goes.)

After the first samples came back from the company's manufacturing facility in China, he shared a photo of the sweaters branded with bitcoin and Ethereum logos to Reddit. It shot to the front page of the site and received over 2,000 "upvotes," Reddit's rough equivalent of "likes."

During the first weekend of online sales in October, Hodlmoon sold 200 sweaters.

I get the feeling that these #Bitcoin sweaters are going to be in style all year long.https://t.co/ccp0VgeI29

The company went on to sell over 2,000 sweaters in 2017, before it completely sold out about two weeks before Christmas. The sweaters retail for $59.99, generating roughly $200,000 in revenue in fewer than three months. Hodlmoon accepts credit and cryptocurrency as payment.

Even Dmitry Buterin, a cryptocurrency entrepreneur and father of Vitalik Buterin, the founder of Ethereum, sports Hodlmoon's Ethereum-themed sweater in his Twitter profile picture.

Cohen said the sweater's success stems from a passionate community of crypto investors.