Why Costco only charges $4.99 for a rotisserie chicken 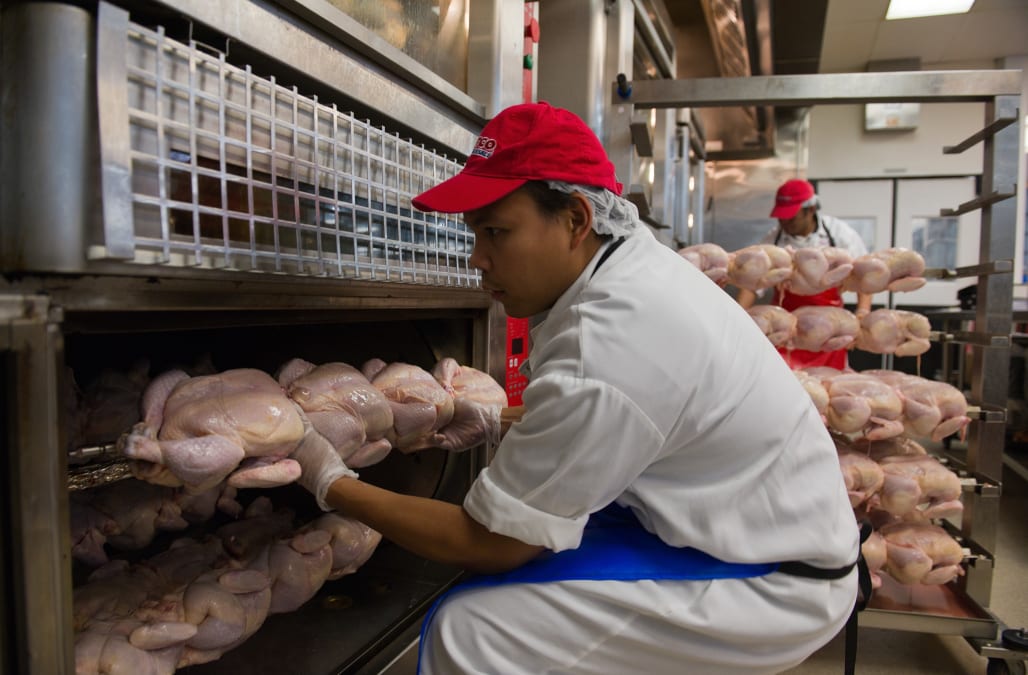 Costco would rather take a hit to its profits than raise the price of its $4.99 rotisserie chicken — but it isn't actually a terrible business decision.

The rotisserie chicken boom kicked off in the 1990s and hasn't slowed down since. 625 million rotisserie chickens were bought in US supermarkets in 2017, according to market-research firm Nielsen. Costco itself sold 87 million of them in its 2017 fiscal year, compared with 51 million in fiscal year 2010.

In that time, the cost of selling rotisserie chickens has increased because of rising labor and preparation costs. But despite this, Costco hasn't budged on the price.

We move items on purpose

Our stores constantly move their stock around, so you won’t necessarily find the peanut butter in the same spot it was last time. The company touts it as a “treasure hunt,” but it also knows the more time you spend scanning the shelves, the more likely you are to notice (and buy) other items. Check out these tips for saving money at Costco.

We'll keep in item in one spot if it's selling

As we move items around, we pay attention to how they’re selling. If they do particularly well in one spot, we’ll keep them there.

Pretty much everything goes on sale

Wondering if you should stock up or wait? Most items will go on special eventually, so it’s worth holding off if you can be patient. Check out these things you should never buy at Costco.

You can hunt us down

Got a meat question but don’t see a deli employee on the floor? Just knock on the door to the department, and we’ll be happy to answer any questions you have.

Don't sweat on missing a sale

While Costco doesn’t price match with other retailers, it will honor its own sale prices on earlier returns. If you notice a costco.com item you bought had a price cut within 30 days of purchase, put in a request online to get the difference refunded. Some warehouses offer the same perk for in-store purchases, so stop by the membership counter to see if we can help.

Our rotisserie chickens are as good a deal as you hoped

Our price tags warn you if we aren't restocking

An asterisk in the upper right corner of a price tag signals our location isn’t reordering the item. It might come back at a later time, like if it’s seasonal, but stock up now if it’s one of your favorites. Learn more about what asterisks on Costco price tags mean.

What you see is what we've got

Costco is a “warehouse” store in a literal sense—we don’t have any additional storage from what you see on the shelves. If it’s not there, don’t ask us to check the “back.” The “back” doesn’t exist. Every now and then, the items will be out of reach on the high pallets, but most stores won’t bring the forklift out for just for one item. Come back tomorrow; it will probably be restocked.

You can't use manufacturer coupons

We know you’d love to get an even better deal on the items in your cart, but we don’t accept manufacturers’ coupons, and we won’t negotiate for a lower price. If you want to save extra money, check our warehouse savings books.

We can help you through tragedy

Steel Costco caskets can cost as little as $950, which is a steal compared to other distributors. The company currently ship to 36 states, plus the District of Columbia. Here are more Costco perks every member should know.

Put your pizza order in early

On a busy Friday, you might have to wait 20 to 25 minutes for a fresh pizza. Make the most of your time by giving us your order before you start shopping so it’s finished cooking by the time you want to leave.

Our price tags have a special code

Most prices end with .09 (.89, .99, etc.), but a couple price tags signal you’re getting a particularly good deal. A price ending in .97 means the item is on clearance, so you’re getting an even better deal than usual. Meanwhile, a .00 or .88 price tag signals the manager decided to cut the price, sometimes because it’s the last one in stock, doesn’t have a box, or has pieces missing. Learn more about the secret codes behind Costco’s prices.

You can get your non-member friends in

It’s no big secret that you can bring two guests with you to shop, but you can set up your friends who refuse to buy a membership with their own access cards. Only members can buy and refill a Costco Cash Card, but whoever you give it to has access to the store to spend the store credit whether they have an annual membership or not. Check out these other things you can do at Costco without a membership.

You don't pay much more than the store does

To make a profit, stores mark up their prices from what they pay the supplier. For instance, most grocery stores jack up meat prices by at least 30 percent. But at Costco, you won’t pay more than 15 percent more than the store does, and the prices average just a 10.6 percent markup.

We appreciate when you order ahead

We normally have enough party platters in stock, but we appreciate the heads-up the day before if you know you’ll be loading up so we can prepare. We don’t mind making extra, but we hate telling customers we’re sold out because one person wiped out our stock.

"When others were raising their chicken prices from $4.99 to $5.99, we were willing to eat, if you will, $30 to $40 million a year in gross margin by keeping it at $4.99," CFO Richard Galanti said in a 2015 earnings call, referring to a hit the retailer took after a bird-flu outbreak pushed prices higher, according to the Seattle Times. "That's what we do for a living."

But this is neither a bad business decision nor a selfless act of kindness for its customers.

Costco's entire business strategy is built around buying in bulk, which isn't typically conducive to frequent store visits. To combat this, the retailer uses lower-priced products to drive foot traffic to stores. Its cheap gas and food court are other examples of this.

Once in the store, these customers are more likely to be drawn into purchasing other products that they otherwise wouldn't have. And it's not just Costco — other stores also use this tactic with rotisserie chickens.

"If they get a chicken, a salad, and maybe they pick up a bottle of wine — now we're really talking," Don Fitzgerald, vice president of merchandising at Mariano's, a Chicago grocery chain that Kroger bought in 2015, told The Wall Street Journal.

Costco has since invested in other ways to save money while preparing its chickens, including buying larger, more efficient ovens and cutting costs with containers that use less plastic, The Journal reported. It's also building its own $300 million chicken-processing plant in Nebraska, which is expected to provide two million chickens per week for Costco and will likely bring supplier costs down.

The retailer is just as stubborn with its chickens as it is with its $1.50 hot dog and soda deal, which hasn't changed in price since it was introduced in 1985.

In the 2009 edition of Costco Connection, David Fuller, the assistant vice president of publishing, explained why, writing that Costco wanted to prove that "a business can operate on a fair markup and still pay all of its bills."

He continued: "Holding a price that steady for that long sends a clear message about what is possible when you decide to operate your business model on a 'cost-plus' basis instead of a 'what the market will bear' basis."

Are you a Costco employee with a story to share? Email mhanbury@businessinsider.com