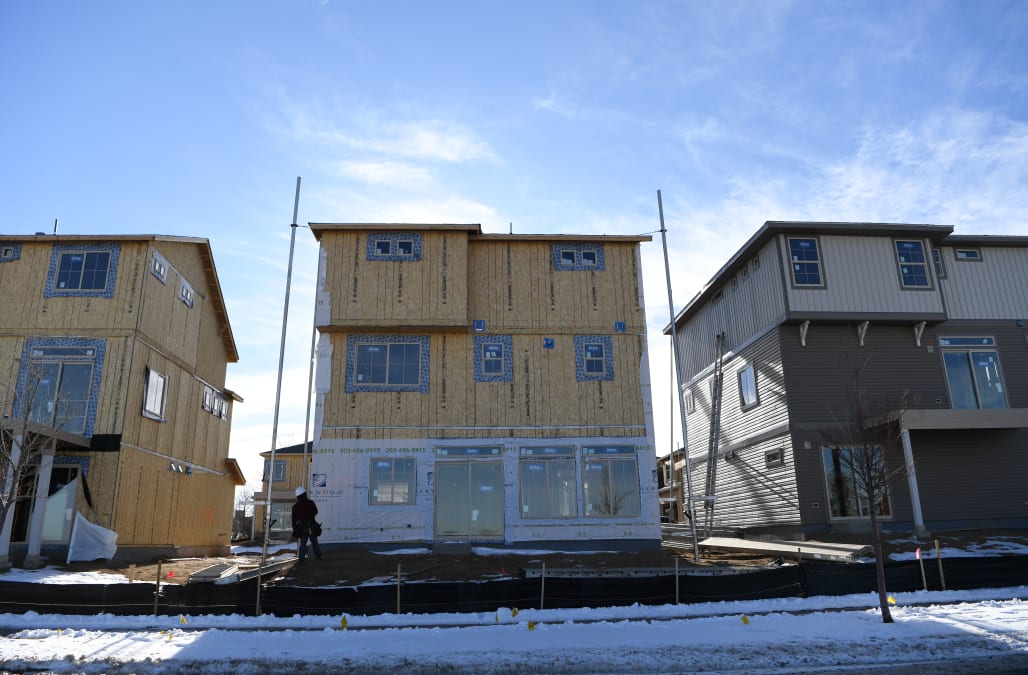 While 2017 was a hot year for the housing market, homebuilders face cost challenges that will carry through 2018.

According to John Burns Real Estate Consulting Group’s survey of 300 homebuilding executives, 40% were surprised by how much their costs increased last year.

Builders have to increase pay for workers as “stronger than expected sales have pushed construction trades to the limit,” said John Burns’ SVP Jody Kahn. She specifically cites the lack of immigrant labor as a headwind.

Buildable land is also in limited supply, with finished lot prices exceeding the prior 2006 peak by 2%. And, the costs of materials, especially lumber, drywall and concrete have been burdensome on builders, according to Kahn.

“Lumber was on an upward trend even before some of the catastrophic natural disaster events that we’ve seen… So that’s the one that I think we all need to be paying attention to for 2018. The lumber impacts could be longer lasting,” he said.

The reason for the increase in lumber price is, in part, due to the tariff on Canadian lumber, which comes amid talks to renegotiate NAFTA terms. The U.S. heavily depends on Canada for its lumber. In 2016, 33% of the softwood lumber used in the U.S. was imported, with more than 95% coming from Canada, according to the National Association of Home Builders.

RELATED: Here are some of the best cities for homeowners in America:

If you recently became a homeowner in the Mile High City, you can pat yourself on the back. Our data shows that Denver is the best city for homeowners. Home values have been consistently growing. From 2010 to 2015, Denver home values grew 12.6%, with a 5.3% increase between 2014 and 2015. Denver also has the second-lowest average effective property tax rate in our top 10 at 0.54%.

Demand for housing in Fremont has risen recently, perhaps due to the city’s proximity to San Diego. Fremont residents saw the largest rise in median home values in our top 10 from 2014 to 2015. Values rose 5.58% over that time period. But the short-term growth is not the only reason Fremont is a great place for homeowners. Fremont also has one of the lowest property crime rates in the country. There are 1,880 property crimes per 100,000 residents in Fremont.

Homeowners in Hawaii have seen some impressive growth in home values over the past few years. Over the 2010 to 2015 time period, median home values in Honolulu grew 8% and from 2014 to 2015, they grew 3.4%. Homeowners in Honolulu also have the benefit of paying very low property taxes – only 0.29%, according to U.S. Census Bureau data.

Buying in the Golden State? Check out California mortgage rates.

There is plenty of demand for housing in Arlington, possibly related to how close the city is to the nation’s capital. Home values grew 6.3% in Arlington from 2010 to 2015. That growth looks set to continue, as median home values rose 2.17% from 2014 to 2015, as well. Prospective Arlington buyers will want to be aware that the property tax rate here is on the high side. The 0.87% average effective property tax rate is the highest in the top 10.

Gilbert is the first of two Arizona cities to crack our top 10. Home values in Gilbert rose by almost 5.4% between 2014 to 2015. Gilbert also has the lowest property crime rate in the top 10. There are about 1,321 property crimes per 100,000 residents in Gilbert. A fact that homeowners in Gilbert are probably well aware of.

With a population of 650,000, Boston is the second-largest city to crack out top 10. Homeowners here will appreciate the increasing home values and low property taxes, especially considering how expensive buying a home can be. The median home in 2015, for example, cost almost $400,000. For the Bostonians who managed to buy a home, they saw median values rise 3.72% from 2014 to 2015. That’s the 30th-fastest rate in our study. Plus, if you own a home in Boston, you can expect to only have to pay an average effective property tax of 0.77% – a top 20 rate in our study.

Another suburb of Phoenix, Chandler is great for homeowners for many of the same reasons as Gilbert. Home values in Chandler rose 5.17% from 2014 to 2015. That’s the 14th-largest increase in our study. Property taxes are also very affordable. Homeowners in Chandler pay an average effective property tax of only 0.67%, one of the lowest in the study.

In addition, the damaging effects of Hurricanes Harvey and Irma could trickle throughout 2018. Eleven billion dollars worth of building materials were required to clean up Florida and Texas, and Kahn expects an additional $10 billion in 2018. She estimates spending on building materials rose 9% last year and may rise another 5% this year.

As costs continue to surge, it will only translate to more price increases for homebuyers.

Jeff Mezger, CEO of KBHomes (KBH) said that he is “cautious” and “concerned” about how subsequent storms would further impact labor shortages during his third-quarter conference call. And, the company has been successful in raising prices above any direct cost increases that they’ve experienced, and subsequently reported higher margins.

“We do not expect the broad-based labor shortages and related cost increases and delays will resolve in the near future. We also do not anticipate regulatory approval hurdles to ease, or lot and land prices to decline,” noted Kahn.

Melody Hahm is a senior writer at Yahoo Finance, covering entrepreneurship, technology and real estate. Follow her on Twitter @melodyhahm.

More from Yahoo Finance:
Where Americans are moving within the U.S.
What boomers want when buying a house
Trump administration’s proposed tipping rule raises fear of legal wage theft
Here’s where the world’s ultra wealthy live
Why millennials are obsessed with HGTV