32 great products that are still made in the USA 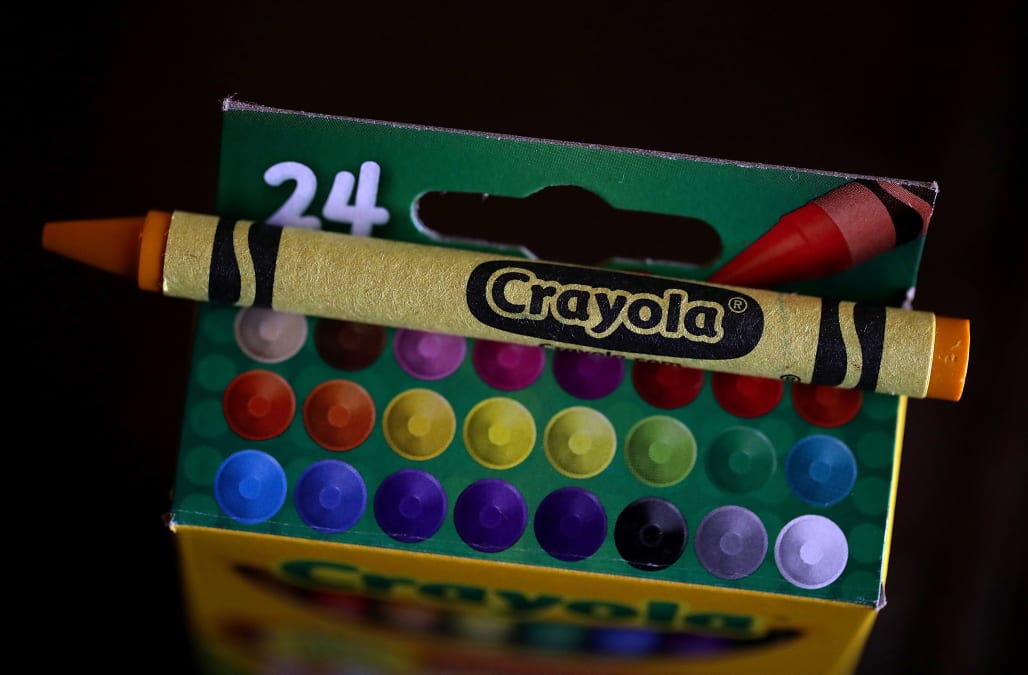 Remember when you’d see “Made in the USA” on everything from salad bowls to skirts? Those three magic words are tougher to find now. So many products and parts for the items in our stores are made elsewhere — everywhere from China to Canada.

But let your flag fly high. With a little scouting, it is possible to seek out and buy American-made products — in fact, some of our most cherished brands do their best to make their products in the 50 nifty United States. Here’s a look at 32 of them.

Warning: It’s tough to be 100 percent red, white and blue in the corporate world these days. Some of these companies might outsource parts or use production facilities overseas, but the majority of their products are as all-American as baseball and apple pie.

32 great products that are still made in the USA

Crayola makes most of its art supplies — including some 3 billion crayons a year — in Pennsylvania. You can’t tour the manufacturing plant, but you can spend a colorful day at the Crayola Experience children’s museum. It also has a manufacturing plant in Mexico City.

Stihl Inc., based in Virginia Beach, Virginia, proudly boasts that a majority of its gasoline-powered chain saws are built in the U.S., from both domestic and foreign parts. Now that’s cutting-edge behavior.

Pyrex is a familiar name to home cooks, whether from the logo on a classic measuring cup or their favorite lasagna pan. The iconic glass cookware has been designed and manufactured in the U.S. since the 1940s.

Many shopping websites let you filter the products you see by price, color or other factors. Red Wing, Minnesota-based Red Wing Shoes goes one step further and lets you sort by country of origin. You can choose to look at products that are made in the USA, made in the USA but using imported materials, or those assembled in the USA with imported components. If the shoe fits …

Tom’s of Maine isn’t kidding about that “of Maine” part. Most of the company’s toothpaste and personal-care products are made in its manufacturing facility in Sanford, Maine. And that’s the whole tooth.

Merle Norman isn’t just a company name, she was a real woman, one who began making and sharing skin-care products with her friends and family back in the 1920s. The cosmetics company still develops and makes its products in sunny Los Angeles.

In some cities, you may have to hunt around for Pearson’s candy bars, but the search is worth it. The St. Paul, Minnesota-based company crafts mouthwatering Salted Nut Rolls (salty peanuts wrapped around nougat and caramel) and Nut Goodies (peanuts and a maple center covered in chocolate), among other sweet treats.

Lodge cast iron pans are a cook’s best friend, allowing you to turn out everything from juicy burgers to skillet cornbread. The Tennessee-based company’s website says that its foundry-seasoned cast iron and seasoned carbon steel products will always be U.S.-made (though enameled cast-iron products are made in China).

The handy double-walled, insulated tumblers from Tervis can be found everywhere from a second-grader’s school backpack to a marathoner’s duffel bag. The Florida company also sells other drinking vessels, from baby sippy cups to wine glasses, and makes them all in the USA.

The folks who make Dum Dum lollipops are no dum-dums. Spangler Candy’s sweet little suckers are crafted in Ohio (though parts of their candy canes are made in Mexico). With flavors ranging from Bubble Gum to Peach Mango to the vaunted Mystery Flavor (created when two flavors merge between batch changes on the assembly line), these sweet treats are all-American.

You can get an NFL or MLB jersey anywhere, but only Ebbets Field Flannels offers up jerseys (and caps) honoring teams long gone. The jersey shown is a recreation of those worn by the Chicago American Giants, a dominant Negro League team from the 1910s and ’20s. Ebbets Field Flannels makes its products in Seattle, not far from that city’s baseball and football stadiums. Play ball!

It’s hard to see a shiny silver Airstream trailer and not long to take one out on the road. Airstream builds these sleek vacation vehicles in Ohio, and even ships the American-made product out for sale overseas. RV there yet?

It makes sense that Gibson guitars are made in two of America’s most revered musical cities — Nashville and Memphis — and one. (Facilities are shifting as of press time, but manufacturing will stay nearby.) Slash, Johnny Cash and Ace Frehley are just some of the artists who’ve played Gibsons. They know how to pick ’em.

Not all of us can afford a home pinball machine from Stern, but just in case our money ship comes in, it’s good to know our game would be American-made. According to The Verge, Stern Pinball’s machines are not only made in a Chicago-area factory, but the factory also offers a playroom where employees can test out the latest games. Where do we apply?

Naturally, Harley-Davidson motorcycles are made in the USA. The coveted bikes are as much a symbol of American individualism and freedom as the flag. Even the company’s headquarters makes sense: Milwaukee, Wisconsin, is also the home of “the Fonz” (Henry Winkler), who made black leather motorcycle jackets sexy again on the 1970s TV show “Happy Days.”

Are you ready for some football? Every point ever scored in the NFL has been scored with a Wilson football, handmade in Ohio. (Wilson does make some recreational balls in China, USA Today reports.)

Bear with us if you don’t know the history of teddy bears, but the cute, cuddly critters got their name from President Theodore “Teddy” Roosevelt. The stuffed bears were just becoming a popular new toy in the early 20th century around the time the 26th president went on a hunting trip but refused to shoot a bear that had been chased down, clubbed and tied to a tree. Vermont Teddy Bear makes some of the cutest furballs around. Most are made completely in Vermont, though some larger ones are made overseas and stuffed and finished back on U.S. soil, the company reports.

If you’re going to use “Yankee” in your name, you’d best be able to back it up, and Yankee Candle delivers. The majority of the company’s candles are made by master “chandlers” (candlemakers) in Massachusetts. What does the U.S. smell like? Candles from the company’s See America collection feature such scents as Cape Cod National Seashore and Everglades National Park.

KitchenAid mixers can do everything from whip cream to knead bread dough, and they come in every color of the rainbow and then some. They’re made in Greenville, Ohio, where a museum honoring the appliance shows off every model and color, plus a special cobalt-blue mixer owned, used and signed by famed chef Julia Child. Bon appetit!

American kids can’t wait to get an early start on driving, and many of them first settle in behind the wheel of a Little Tikes Cozy Coupe. The molded-plastic toy cars, complete with friendly googly-eyed smiley face, are all American-made.

Maybe you’ve never heard of Wikki Stix, but many kids know them well. These twisty, waxy, colorful sticks can be bent to spell out names or form all kinds of designs, no glue or paste required. The creative craft is manufactured in Phoenix, using USA-made raw materials.

Whether you’re a cop hunting for a criminal or just an average homeowner taking out the trash, Maglite flashlights light up the night. The company is proud of its American-made tradition, and Mag Instrument owner Anthony Maglica vows that will never change. Now that’s a bright idea.

Get those all-American Fourth of July steaks sizzling on an American tradition: a Weber grill. Most of the company’s classic cookers are made in Illinois. That’ll leave a good taste in your mouth.

Zippo lighters were first created in 1932, and they are still burning brightly more than 80 years later. As we mention in “11 Indestructible Products Totally Worth The Price,” the company will fix its Windproof lighters for free, even if they’re decades old. Zippo lighters are made in Bradford, Pennsylvania, and the location is stamped on the bottom of each one.

American regional foods are a wonderful part of the national flavor, from Seattle’s salmon to Florida’s key lime pie. But not everyone has had the chance to sample Vermont Common Crackers yet. This New England tradition is a crunchy and mild snack, perfect with all varieties of cheese. The crackers were invented in Vermont, where they’re still baked today. You can only buy them from the Vermont Country Store. Julia Child called them her must-have cracker for chowder.

True story: One year, I bought a number of small American flags to hand out to kids at a July 4 party, only to notice too late that their poles were stamped “MADE IN CHINA.” That won’t be a problem with flags from USA Flag Supply. Every flag, from the Stars and Stripes to state flags and beyond, is handcrafted in the U.S. Long may she wave.

Many plastic toys are made in China, but American Plastic Toys are made right where the name declares. The company’s products are assembled in the U.S., and most are crafted from American-made or U.S.-purchased components. Toy kitchens, sand toys and dollhouses are just some of the playful options.

Most shoes sold in the U.S. are made elsewhere, but Allen Edmonds proudly touts its American-made footwear. And they’re not exactly cranking them out: The company has a 212-step process for making its elegant shoes. When’s the last time you went through 212 steps to do anything?

“K’nex” looks like the name of a planet from a “Star Wars” movie, but really it’s a play on the word “connects,” because that’s just what these creative toys do. The idea came when founder Joel Glickman was playing with some drinking straws at a 1990 wedding. Inspired, he eventually turned his fidgeting into a business. Now kids all over are building with the Pennsylvania-made rods and connectors that make up these cool toy kits. Did that bride and groom get royalties?

No, Romy and Michele didn’t really invent Post-it Notes, despite what the characters claim at their high school reunion in the 1997 movie. Instead, the handy notes are made by tape titan 3M, formerly called the Minnesota Mining and Manufacturing Company. The company says that all Post-it Notes sold in the USA are made in the USA. That’s their story, and they’re sticking to it.

More from MoneyTalksNews:
How to Save $300 This Month at Supermarkets, Drugstores and Beyond
6 Secret Places to Find Coupons for Fresh Fruits and Veggies
What’s Ahead for Stocks, Housing and Oil Prices in 2018?